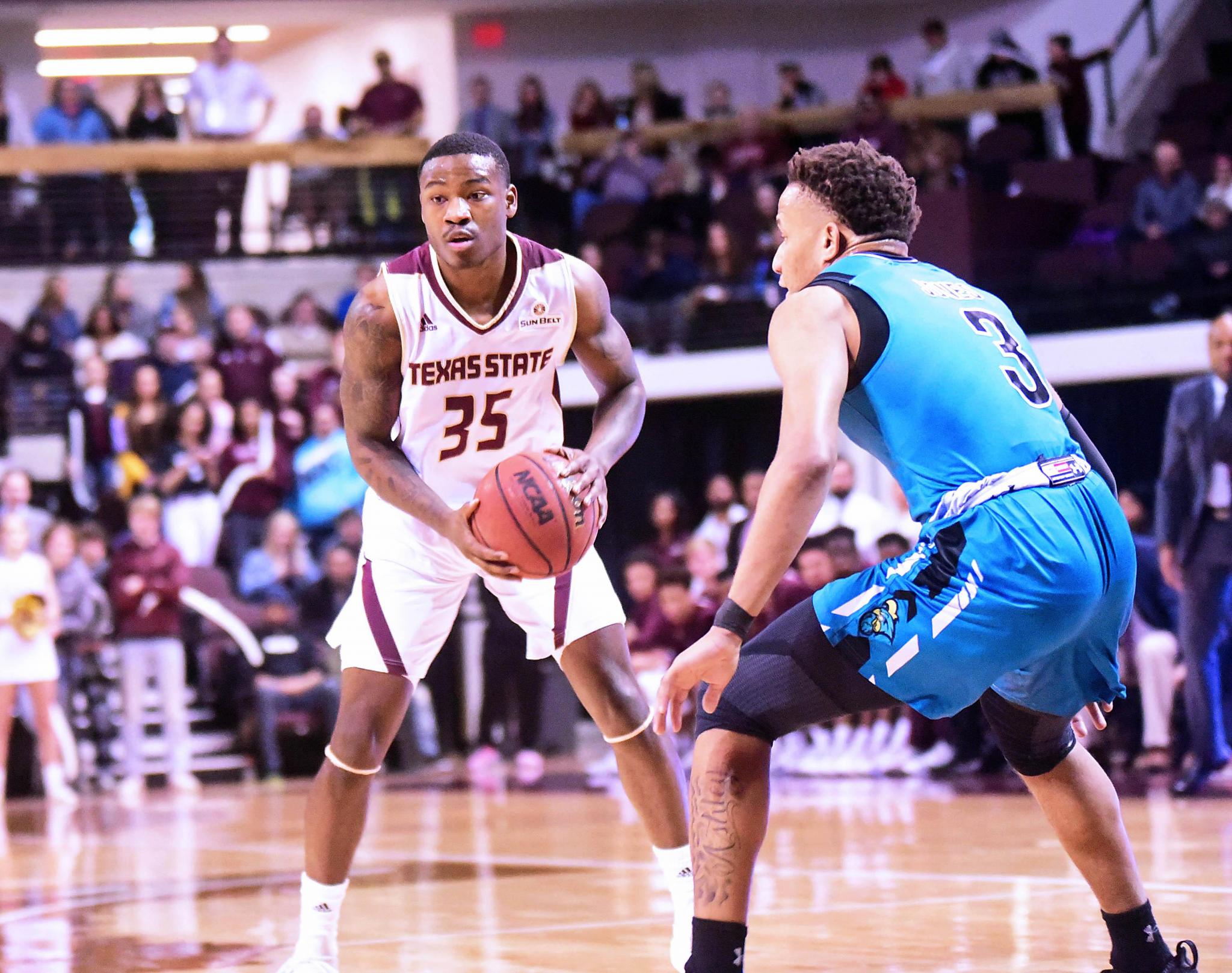 With his team surrounding him after Tuesday’s practice, Texas State head coach Danny Kaspar told his team they’re in for a difficult game on Thursday.

Although the Warhawks only possess a .500 record during conference play, Kaspar believes they could’ve easily won a couple more games.

“Monroe is a good team,” Kaspar said. “They’ve lost a lot of close games. I thought they got cheated at Georgia State with that (missed) call. They should’ve won that game. Georgia Southern beat them on a 3-point shot. So, I mean, I think they have six losses but they could very easily could have only four. But it didn’t work out for them. I just think they’re one of the better teams in the league.”

Texas State enters Thursday’s contest on a four-game winning streak. The Bobcats took care of business during their Arkansas road trip, defeating both Arkansas State and Little Rock. Texas State took sole possession of first place during last week’s Arkansas swing and now the Bobcats look to build on it.

“We understand this is the last home stretch, everybody is fighting to get into the top four seeds to get into the (Sun Belt) tournament,” senior guard Tre Nottingham said. “With us being one game ahead of Georgia State, we needed those last two road-trip wins because we’ve got to finish with a (three-game) road trip with South Alabama, Troy and UTA. So, we had to take care of those two games. Now, we’ve got to take care of these two home games, for sure.”

ULM comes into its matchup against the Bobcats with three of the Sun Belt’s top 20 scorers. Senior guard Daishon Smith, a transfer from Wichita State, leads the conference in scoring with 22 points per game. Sophomore guard Michael Ertel is ranked No. 14 in the league, averaging 15.3 points a game. Senior forward Travis Munning comes in at No. 19 with 13.6 points per game.

Bobcat junior guard Jaylen Shead knows how difficult Thursday will be with the scorers ULM has on its team.

“It’s going to be another challenge to slow guys down,” Shead said. “But also, they’re both really, really efficient. The teams that are efficient, you have to limit your turnovers but also stop them on the other end. So, I feel like we can do it. We’ve been working on it. As a team, if we sit down and do what we have to do, we’ll be fine.”

After facing ULM, the Bobcats take on Louisiana-Lafayette on Saturday at 4 p.m. The Ragin’ Cajuns are currently on a two-game winning streak.

Senior forward Jakeenan Gant leads Louisiana with 21 points per game, which ranks No. 4 in the Sun Belt, and 8.3 rebounds a game. Alongside Gant is senior guard Malik Marquetti and senior guard Marcus Stroman, who tally 15.1 points and 12.2 points per game, respectively. Stroman leads the conference in assists with 6.4 per game and is second in the league in steals at 2.1 a contest.

The Ragin' Cajuns hold a 12-1 all-time record over the Bobcats.

With a challenging weekend ahead, Texas State knows how important it would be to win both games in its quest to win the Sun Belt regular-season championship.

“I mean if we’re 2-0 (this weekend), I feel like some people, you know you’ve got the Georgias going to the Carolinas,I just feel like if we go 2-0 we’ll extend our lead by at least another game over everybody if we could do that,” Kaspar said. “I feel like there’s a good chance that will happen that some people right behind us may lose a game if we can take care of our business at home.”