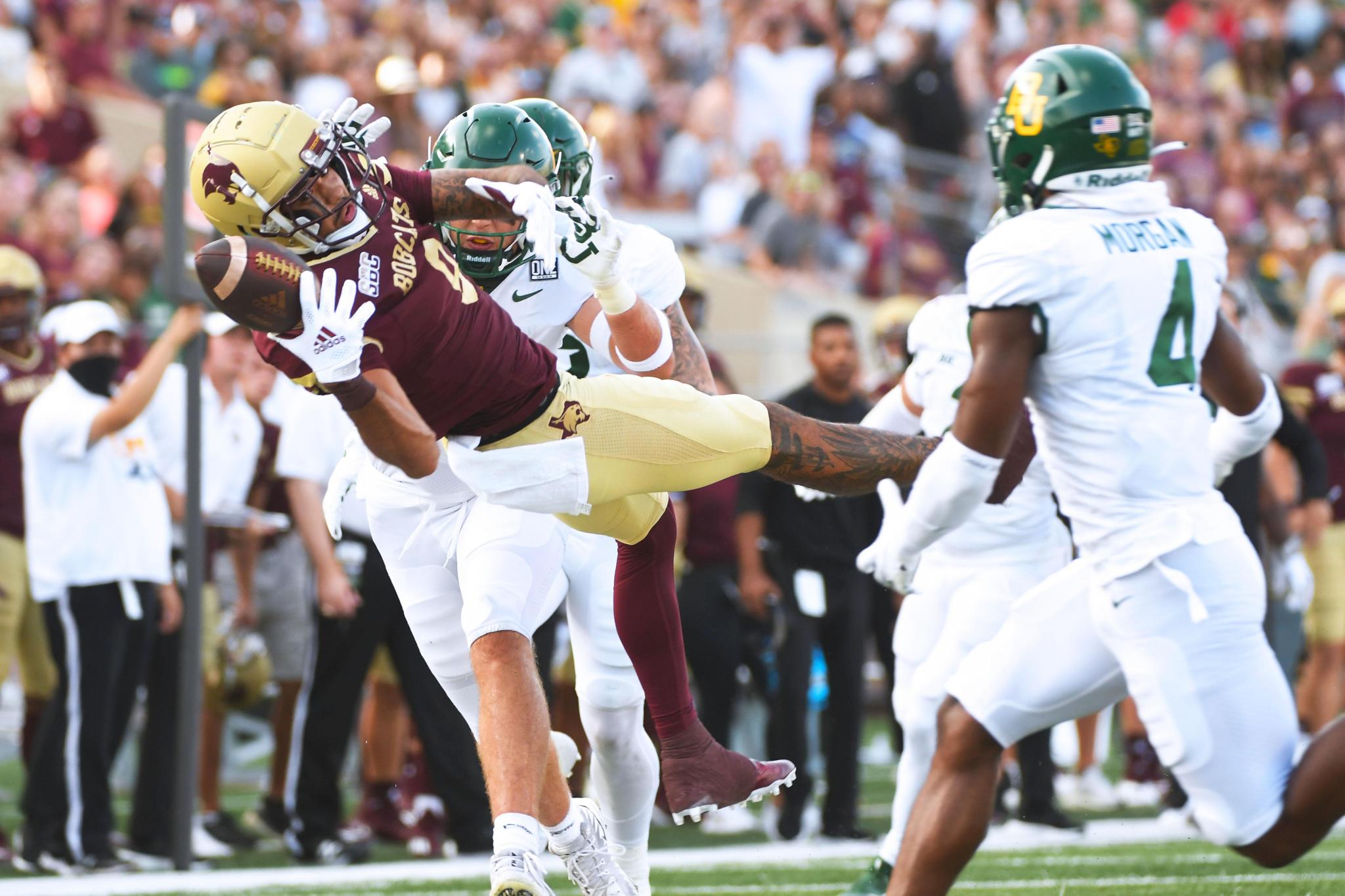 Texas State’s coaches knew what Eastern Michigan’s offense was going to do. They just couldn’t do anything about it.

The Bobcats’ depth issues, a result of COVID protocols and injuries, weren’t as bad on Saturday as they were a week ago. But the margin of victory they gave up was worse.

“When it gets down to it all, you know, they out-executed us,” Spavital said. “It's a disappointing loss but I give a lot of credit to that football team with Eastern Michigan and (Eagles head coach Chris) Creighton, they do a good job and I think they're a very solid program.”

Multiple players returned from COVID protocol entering the game, including backup quarterbacks Tyler Vitt and Ty Evans. Spavital said senior defensive lineman Caeveon Patton woke up at 1:15 a.m. in San Marcos and flew out to the game Saturday morning after getting cleared. He finished the game with one tackle.

But there were still 19 players not available to put on the field, down from 25 last week. Sophomore cornerback Chris Mills added to the total, entering the concussion protocol during the first half. There were others, such as junior defensive lineman Anthony Shipton and junior cornerback Kordell Rodgers, who Spavital didn’t feel comfortable putting in the game since they hadn’t practiced all week.

“I didn't think we wrapped up well, didn't tackle,” Spavital said. “I've seen these guys make tackles. You look at the first two games, they tackle. You know like, they've got the capability of doing it … We had calls that were right and we had them into positions where you can hit them for negative yards and the guy makes two or three guys miss and he moves on.

“We gotta be a lot better at that. We gotta be able to tackle those guys, especially a run-heavy team like they are.”

Texas State seemed like it found some footing late in the second quarter. The offense went on an eight-play, 75-yard drive that ended with a 29-yard touchdown pass from redshirt sophomore quarterback Brady McBride to junior wide receiver Trevis Graham Jr., cutting EMU’s lead to 28-14.

The defense got a stop to close out the first half and the offense found the end zone again on their first drive of the third quarter. McBride found junior wideout Javen Banks for the 29-yard TD, making it a one-score game.

“Where we're at offensively, like, we have the ability to move and go,” Spavital said. “And you see sometimes we look like an unbelievable offense where we're working stuff on the perimeter and we're handing the ball off and it's working and we're making some plays as well. And then we look like we don't know what we're doing at times and the inconsistencies in like, you know, you start off and you had a good first-down call and 2nd down and 5 and next thing you know, it's 3rd down and 10.

“And I don't even think we were in a third down and short all game. I think it was either we were scoring, we were moving the ball effectively or we were sputtering and we were three and out at times and we didn't look like we didn't know what we were doing. So you know, Brady's great. I gotta look at it a little bit more.”

McBride finished the game completing 16-of-25 passes for 187 yards, throwing two touchdowns to Banks and another to Graham. Sophomore running back Brock Sturges led the backfield with 68 rushing yards on 14 carries, followed by redshirt Calvin Hill with 58 yards on 10 carries.

The Bobcats hobble into a bye week hoping they’ll have enough time to make corrections as Sun Belt play begins. The maroon and gold will host South Alabama (3-0) on Oct. 9 inside Bobcat Stadium.

Spavital said the team will get all its players back from quarantine by Wednesday. Texas State will practice Tuesday, Wednesday and Thursday during the bye week. Spavital said the Bobcats need to focus on themselves before turning their attention to the Jaguars.

“I know these schemes work. I've seen it,” Spavital said. “We were playing some pretty good football in those first two weeks and the last two weeks, we've been all over the place, man. And we gotta work our way through who we're going to put out there and we gotta make sure that we keep showing up and going to work.”