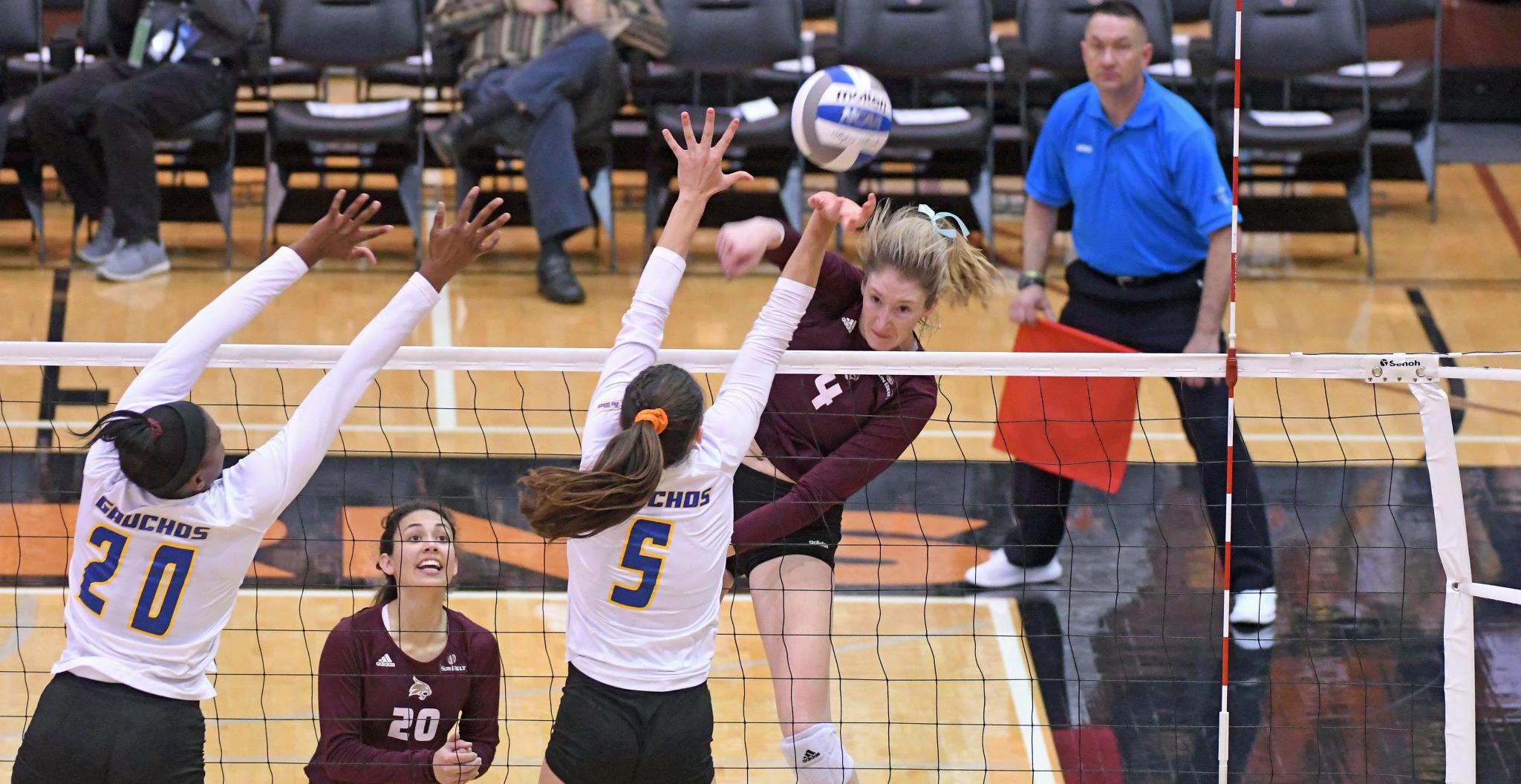 Bobcats subdued by Gauchos in NCAA first round

AUSTIN — On a different night, the Bobcats might’ve been better.

“We were beaten tonight by a better team,” head coach Karen Chisum said. “We've had the experience being here but you never know what's gonna happen. But I'm proud of the kids and what I told them a while ago was, ‘Hey, it's been great season. We fell short tonight. But unless you're the national champion, you're season's gonna end in a loss.’ So, I'm proud of the kids, it's been a great season.”

The team held leads in each of the first three sets, but only stayed in front in the third frame. Chisum always stresses the serving and passing battles to her team, yet the Bobcats consistently struggled to get into their offensive system.

When Texas State did get a clean look at the net, Gauchos sophomore libero Zoe Fleck was usually there to stop it. She finished the match with a game-high 26 digs. The maroon and gold was held to a .169 hitting percentage, the eighth-lowest mark of the season.

“I think Santa Barbara came out and did a very good job of starting aggressive tonight,” sophomore setter Emily DeWalt said. “They served us well and the short ball, I think we struggled with that. They hit that perfectly in there in the scouting report. So I think I was one of them and then just hitting us deep was not good tonight.”

“They knew our weaknesses and they definitely aimed at them,” sophomore outside hitter Janell Fitzgerald said. “We knew what their weaknesses were, we just didn't execute as we should have.”

The Bobcats did find some success in the third set. The team swung for a match-high .286 percent, picking up 14 kills — including four from Fitzgerald — while only committing four errors.

“I think we just played Bobcat volleyball,” DeWalt said. “We stopped worrying about the other side and started playing us. And I think going into that fourth set, we had a lot of confidence but we came out and didn't pass the first couple walls and we just kind of lost the momentum.”

UCSB began the fourth frame on a 6-1 run and never looked back. The Gauchos took the final set, 25-14, bringing Texas State’s five-match winning streak and season to a halt.

Fitzgerald led the team with 12 kills, followed by senior outside hitter Cheyenne Huskey. UCSB held Huskey — averaging .245 percent on shots — to a .050 attacking percentage, a feat only six other schools have done. The Bobcats are now 1-5 in those matches.

DeWalt finished with 38 assists. Junior libero was the only Bobcat with double-digit digs with 13. Huskey and sophomore middle blocker tied for most blocks with four apiece.

UCSB improves to 4-0 all-time with the over Texas State. The Gauchos will take on the winner of No. 2 overall seed Texas versus Albany (NY) on Friday at 7 p.m. in Austin.