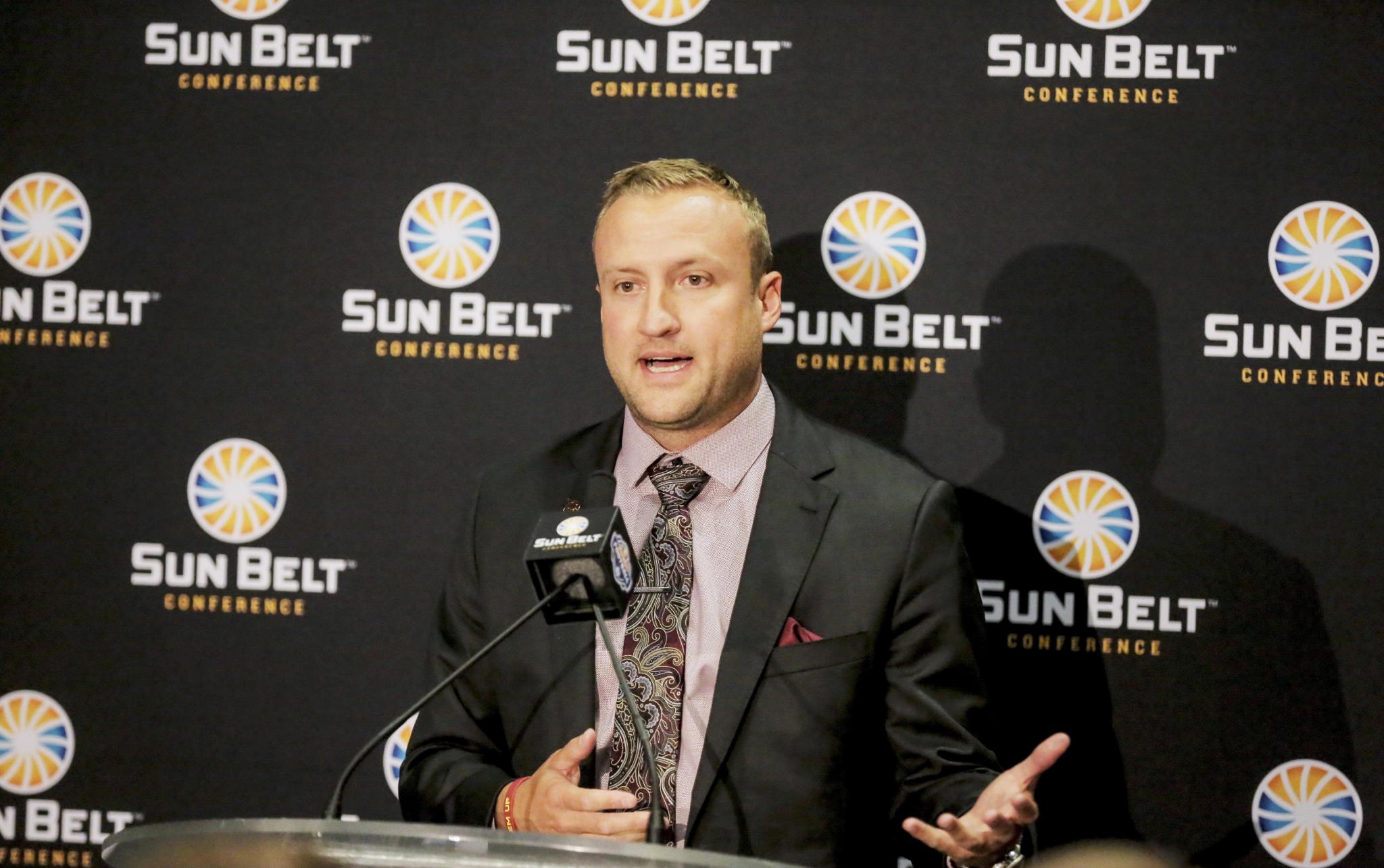 NEW ORLEANS — Jake Spavital warned that there might be some “coach speak” to his answers. He couldn’t give away all his secrets.

But the Texas State head coach took questions in stride Monday afternoon at the Sun Belt Football Media Day inside the Mercedes-Benz Super Bowl, his first time publicly speaking about the Bobcats since the spring game on April 13.

“(There's) a lot of great energy and excitement right now in San Marcos and I'm pretty honored and privileged to be the next head coach here,” Spavital said.

Spavital called his time with the maroon and gold “a blur” thus far, but said that the strength of his coaching staff has helped him manage through his first few months at the helm. Spavital noted that many of his coaches have deep Texas ties, which helps with recruiting, and experience working on Big 12 staffs.

He expects the latter part of his crew’s resume to be especially helpful in preparing for Texas State’s season opener against Texas A&M in College Station on August 29, as they’ve all worked with players through high-stakes, nationally-televised games before.

“They've done it at higher places and bigger conferences and they know what they're doing, which allows me to focus on other facets of the program and anything that touches our program because I trust these coaches from a recruiting standpoint, but also from a coaching standpoint,” Spavital said. “It's refreshing to me because they can talk to the players and tell them ‘Hey, you've got to take it one play at a time. Worry about your job.’”

The head coach declined to name a starting quarterback, calling the competition “wide open.” He likes that junior transfer Gresch Jensen has familiarity with the scheme, playing under offensive coordinator  Bob Stitt — who Spavital said will be calling plays this fall — while Stitt was the head coach at Montana in 2017. But Spavital also said he also likes that sophomores Jaylen Gipson and Tyler Vitt already have established chemistry with other players currently on the roster. A Texas State official confirmed that Chase Hildreth, who was featured in season four of Netflix’s “Last Chance U” and transferred to Texas State in the spring, is no longer on the team.

Spavital intends to put the quarterbacks through more high-stress scenarios when fall camp begins on July 30.

“I've got seven active NFL quarterbacks right now and I don't think there's anybody in the country that has that many guys,” Spavital said. “And what we've done with those quarterbacks is, we've played to their strengths. We want next guy to come in to be their own man and understand that we're going to work with them and we're going to put them in positions that they are good at.

“I know there's a lot of intangibles at quarterback, so I'm pretty intrigued with where that competition is going to go because all the other positions are kind of solidified in a way, where that one I'm just not ready to just hand that one out yet. I want to see some improvement on both ends.”

The same goes for the rest of the Bobcats. Spavital said the team should expect to see more game-like scenarios woven into their practices as the 2019 season approaches. Spavital said he wants his players to be “thinking all the time” and worrying about the minor details of their schemes.

Senior linebacker Bryan London and offensive lineman Aaron Brewer joined Spavital at the event, with both recently being named to All-Sun Belt preseason teams. The student-athletes said they’ve enjoyed their time working with Spavital thus far and are expecting to see improvements from the team this year.

“I feel like we're just going to be more consistent and efficient,” Brewer said. “You just learn the basics and you just keep chipping at it ... You just keep going at it and it becomes muscle memory.”

“Accolades are cool, like preseason, all that is cool. But I just want to win,” London said. “I just want to experience winning because I feel like the university is deserving of it. That's the only thing left that I want to do, really.”