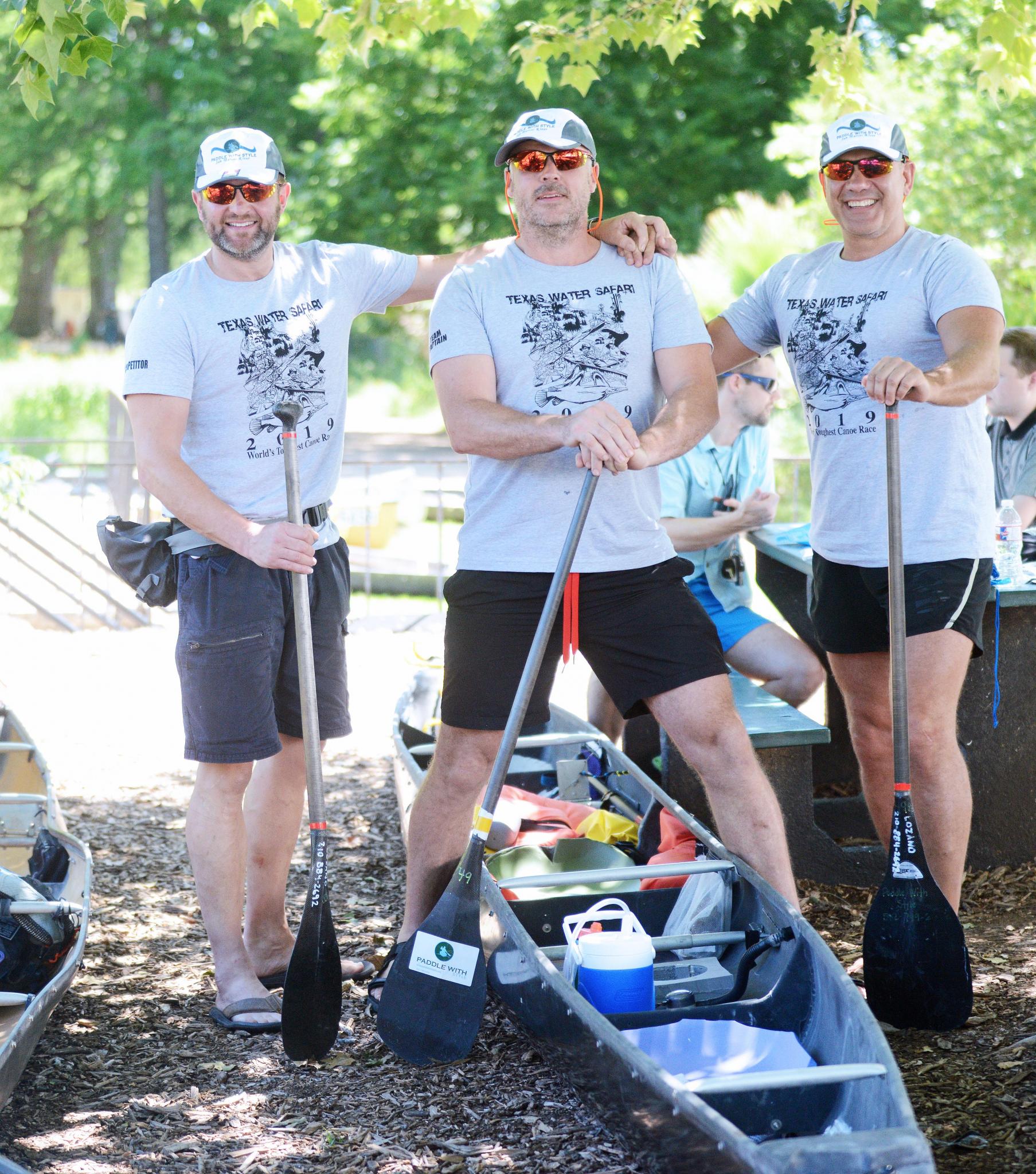 Gregg Botterman and Roland Burr sat at a Meadows Center picnic table in the shade Friday, with bright red stickers of the alphabet scattered in front of them.

“I need an ‘R,’” said Rob Hill, the third member of their crew, sitting on the ground next to the team’s canoe. Burr gently handed him the letter and Hill carefully stuck it to the side of the boat. The trio were preparing their vessel for the Texas Water Safari.

They seemed half-confident; assured in their physical ability but uncertain in what exactly they were getting into. They’d been through tough adventures before, including a few far from home. But the Safari is supposed to be “the world’s toughest canoe race.”

Fifteen minutes later, Hill slapped on the dot of the final exclamation point and the message is sent.

“THE BRITS ARE COMING!!” 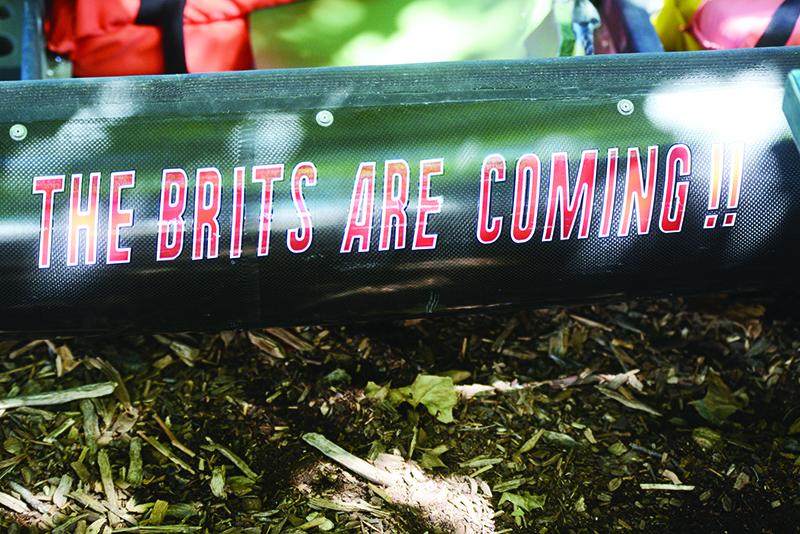 “I think we should definitely have ‘the Brits are swimming’ on the other side,” Hill said with a laugh.

The Brits originate from London, where the trio frequently rows on the Grand Central Canal. Each Brit owns his own business back home — Botterman a glass manufacturing company, Burr a property development agency and Hill finance firm. But each also has a streak of testing their grit.

Botterman played professional rugby from 1988-2000, making 186 appearances for Saracens, a club in the top level of the domestic rugby union in England, Premiership Rugby. Burr is one of seven men holding the Guinness World Record for the longest distance travelled by an ocean rowing boat in 24 hours. Burr took the title on Jan. 3, 2015, rowing 192.4 kilometers through the Atlantic Ocean from 4 a.m. to 4 a.m.

Burr has also trekked across the North Pole and most recently placed 10th in the men’s canoe class of the 2016 Yukon River Quest in Canada. Hill accompanied him on both trips.

“Really, it’s just a challenge to test themselves,” Botterman said. “And then, stupidly, I agreed to come along for their next one.”

“After the Yukon, we started looking for other things to do,” Burr said. “And then we used that great British company, Google, to find out about another race and this popped up as being one of the world’s toughest canoe races. So, we thought we’d come and just make sure that it is.”

The trio commissioned Paddling With Style owner Holly Orr with constructing them a canoe for the race. She also knew they needed a team captain — an individual designated to make contact with the team at each of the Safari’s 11 checkpoints. Orr introduced them to six-time Safari veteran, Jonathan Zeek.

“She got the boat built for these guys and completely rigged it out for them, put everything that they needed in the boat so that when they showed up, all they needed to do was basically jump in and go,” Zeek said. “She knew me, we’ve known each other for a very long time and they needed a team captain. So, she let me know that they were in the market and I let them know that I was available.”

The Brits arrived in Austin Wednesday afternoon. They drove to San Marcos the next morning to pick up their vessel and take it for a test run. Burr described it as “interesting” and said the team did get wet.

Burr explained that paddling on the San Marcos River involved more technicality than other places, due to the obstacles and flow of the river that have made the Safari famous.

“We haven’t got anything like this in the U.K.,” Burr said. “There’s no bodies of water like this. There aren’t these type of canoes available in the U.K. as well. So, we’ve been practicing on non-moving water. So this is completely different. I mean, we can do a lot of physical training and endurance training. But on the technical side of it, we haven’t been able to do too much practice.”

The team is competing in the unlimited class of the race, open to crews of three to six rowers with no restrictions on boat specifications. Botterman asked Zeek if they would receive a trophy if they came in first place. Zeek nodded his head.

“Yeah, well, there’s no chance of that happening,” Botterman joked.

The three did say they want to be the first international team to cross the finish line this year, excluding Canadians (“They’re sort of American, aren’t they?”).

The Brits cast off from the Meadows Center Saturday morning to begin the 260-mile trip toward Seadrift. They’ll be in a bit of a hurry to make it there, too. The team is planning to spend some time in Miami on their way home.”

“We decided we need a bit of relaxation on the way home,” Burr said. “So that’s our other goal is to make it that far and not be too battered.”