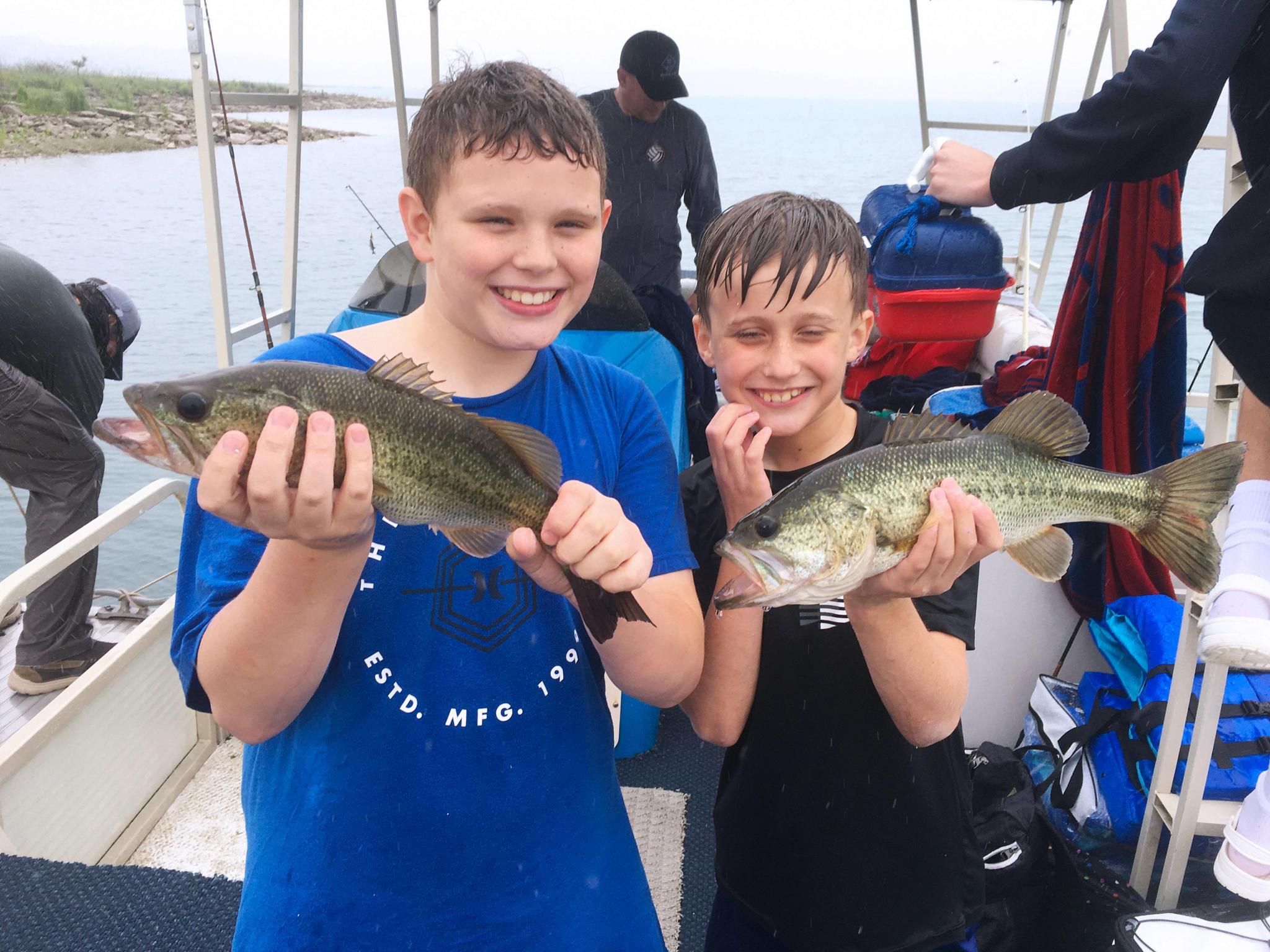 Catching bass on a pontoon boat at a rainy Canyon Lake

Canyon Lake, which is our nearest larger reservoir, is a real enigma. Most anglers, including myself, find it a difficult lake to fish. It’s really a cold, rocky, sterile body of water. It’s deep. So many of the bass drop into deep water during the cold of winter and the heat of summer. If you’re going to fish shorelines, late March, April and May are best in the spring. October is the best month for shallow water fishing in the fall.

But all this has dramatically changed. Last spring, I began to find patches of aquatic grass, primarily hydrilla. On almost all these small grass areas we caught bass.

Last week I fished Canyon for the first time this year. Bobby Whiteside was my fishing partner.

“You’re going to be surprised at the amount of aquatic grass in the lake now. It’s everywhere on the lower half of the lake,” he said.

Bobby and his grandson Wes had caught 29 bass a few days prior. We caught 14 fish, all in the grass.

In past years, whenever a little hydrilla or pond weed got started in Canyon, a flood would come through and wash it all away. Or raise the water level — now muddy water — and cut off sunlight from the grass. No sunlight, no photosynthesis, no grass.

A friend of mine in Cowboys for Jesus Church near Canyon Lake, Clark Reagan, asked me to guide him, his son and grandson on a pontoon boat fishing trip on Canyon the day after Bobby and I fished. I had never fished from a pontoon boat. It didn’t sound good.

His grandson, Wesley, thinks I am a bass guru. I took Clark and Wesley to Bastrop Lake last year and we caught lots of bass. They were total novices but Wesley caught several bass.

When I arrived at the Potters Creek Ramp on Canyon, Clark and his sons, Shawn and Eric, had the big pontoon boat in the water. Five grandchildren were on the boat. Nine of us would be trying to fish. Eight were novices. It had the look of a circus.

Our weather didn’t look very good. Showers were falling all around us. But the overcast was a plus. Bass don’t hold so tight to the cover when the skies are darker. Bright sunshine pushes them deeper into the grass.

We began on a shoreline that Whiteside and I had caught several fish on. I tied topwater lures onto several of the kids’ lines. Some were casting spinner baits. I used a plastic worm.

It was a real setup for disaster. With nine lures flying in all directions, a hook in the eyes or ear was a real possibility.

I quickly caught a nice keeper bass on the worm. So I tied sliding weights, hooks and worms on most of the poles. At least things would be safer. No treble hooks flying through the air. The worms I rigged caught weeds less, so I hoped they would be “eye and ear” less.

Wesley was fishing right beside me when he hooked a nice bass on his plastic worm. We had no landing net so I just lifted him high onto the pontoon boat deck. He was excited. Wesley stays excited about everything.

Later another grandson caught a bass from the stern of the boat. By now, it was raining lightly on us. Then the rain and wind increased. Soon we were all soaked. The kids were dressed in shorts and T-shirts. Most were cold. But they were troopers. They kept on fishing.

Finally, at about 9:30 a.m., we decided to throw in the towel. We could barely see how to get back to the ramp due to the rain, wind and fog.

But all were happy. We had landed seven bass and made a great memory. “The story of the nine wet rats.”

Whiteside and I have always said, “You only remember the real good trips and the real bad (unusual) trips. The ones in the middle are just fillers and easily forgotten.”