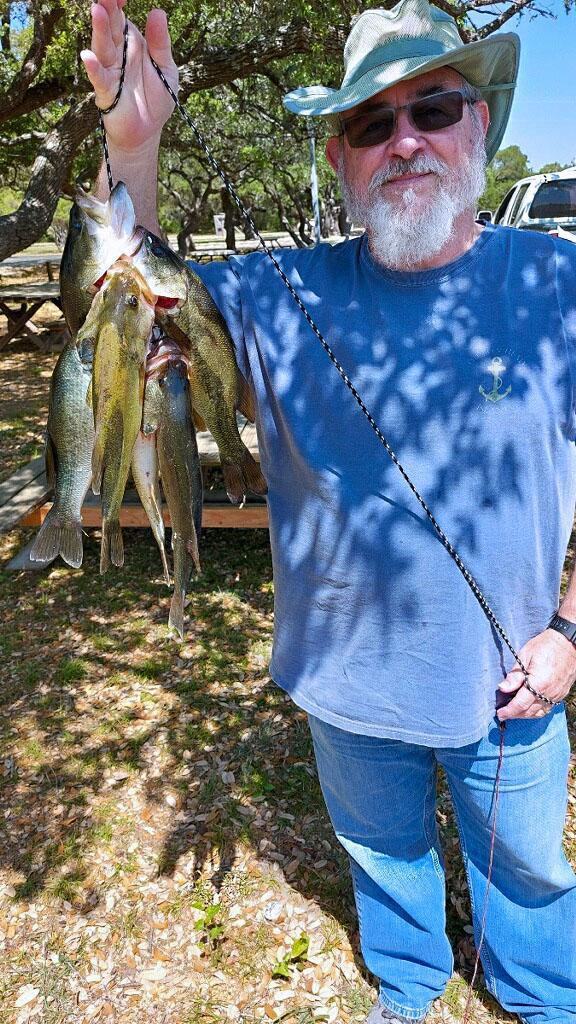 Catching large and smallmouth bass on a revitalized Canyon Lake

Canyon Lake, which is our nearest larger fishing reservoir, has been a very difficult lake to fish. From its inception in the mid-1960s, it has been a clear, cold, rocky, sterile lake. Aquatic vegetation has almost been non-existent. Through the years, small patches of pond weed and hydrilla would get started and then a flood would wash all the grass out. If a flood didn’t destroy the grass then a lake-lowering drought would leave the grass high and dry. Due to this lack of vegetation, Canyon was never one of my favorites. Bass would go deep in the summer and winter, making them difficult to catch.

But something happened about two or three years ago. Patches of hydrilla began to show up. And then it spread. Now, most of the lower half of the lake is full of hydrilla beds and pond weed. That has revolutionized the bass fishing. Bass need aquatic grass for spawning and protection.

Lake Bastrop has always been my favorite lake. It is full of aquatic grass and bass. I consider it an easy lake to fish. My neighbor, Tom Ry, and I caught 23 bass recently. But now Canyon is rivaling Bastrop.

During the laser two years, I have made many trips to Canyon. I pastor the Canyon Lake Cowboys for Jesus church, which is almost on the lake. So if I have a church breakfast or committee meeting, I just take the boat and fish before or after the meeting. Occasionally I leave the boat behind the church building if I want to fish for two consecutive days.

Most of the bass in Canyon are largemouths. But years ago the Texas Parks and Wildlife Department (TPWD) stocked Canyon with smallmouth bass. They have never prospered greatly. There has always been a small population of smallies but never to rival the largemouth. Recently, I was casting my flyrod along a grass bed with brush sticking up through the grass. A nice fish swirled on my popper and put up a stronger fight than most largemouths. It was a nice smallmouth with beautiful markings. The smallmouths can be identified by a smaller mouth, a less distinctive lateral line and much more of a bronze color. We admired the nice fish and then released him.

Usually, I launch the boat at the Potter’s Creek ramp. This put me about midway to where I want to fish. It is not even necessary to crank the big engine to catch fish. The big point near Potter’s campground is loaded with grass. Many fishermen who launch at Potter’s ramp start fishing within 100 yards of the ramp. Or you can fish the other direction toward the actual creek. Recently my neighbor, Roger Wood, and I fished into the little creek. We caught eight bass — seven largemouths and a white bass. This was after a fruitless run to the mouth of the Guadalupe River in pursuit of white bass and stripers.

It doesn’t take a rocket scientist to fish bass on Canyon now. Just locate a large grass bed and fish a plastic worm over the grass. I have been fishing a Texas-rigged worm primarily but some days I’ll switch to a Carolina-rigged worm. A Texas rig lets the sliding weight rest against the hook. Carolina rigs keep the weight about two feet above the hook. The easiest way to fix a Carolina-rigged worm is to simply peg the weight at the desired distance with a toothpick.

Robert Hillegeist and I launched my skiff at Potter’s ramp at daylight Monday. Robert is a novice. He has never fished for bass and has no equipment. But he is retired and does have a fishing license.

It was windy so we ran to the mouth of the river and into a cove out of the wind. The cove is full of rocks, trees and grass — the perfect environment for bass.

I tied Robert a spinner bait on our rod and a shad-colored crank bait on another. I fished the plastic worm. I began to catch fish, some of which were very nice keepers (over 14 inches). Robert got no strikes. I had hoped that the bass would hammer the crank bait. That makes it easy for a novice. Just crank the reel and let the bait wobble.

Finally, I fixed him a Carolina-rigged worm. He had no idea how the bait would feel.

“Just drag it behind the boat,” I instructed. “If you feel pressure that doesn’t turn loose like the grass, it’s probably a bass.” He caught two bass, which made both of us happy.

By noon, we were back at the ramp. Our total catch was 14 bass, six of which were nice keepers. My confidence is growing on each trip that I make to Canyon Lake. Give it a try.