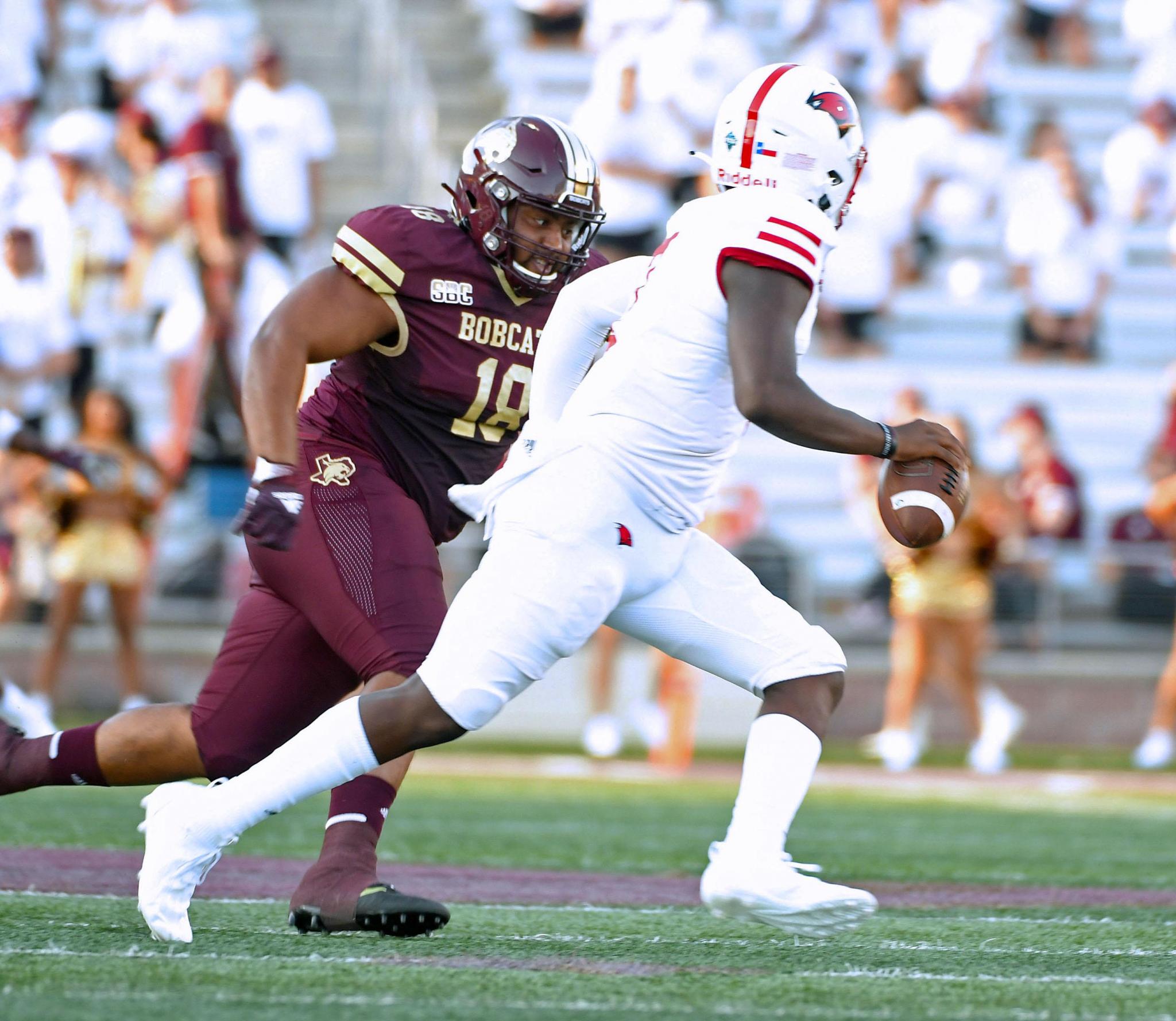 'Cats hoping to redeem themselves at Eastern Michigan

There’s no question Texas State is frustrated with Saturday’s loss to Incarnate Word. The question that remains, though, is whether it derails the rest of the Bobcats’ season.

It’s the type of loss that no one at Texas State expected or planned for, the type that can have serious, negative impacts on the long-term outlook of a program. That’s not a slight to the Cardinals — a team that finished the 2020 season nationally ranked and became one of 10 FCS schools who’ve already pulled off upsets over FBS teams this year. But it is the reality of playing at the highest level of college football.

There were no words spoken in the locker room at Bobcat Stadium after the game until head coach Jake Spavital broke the silence. He shifted the focus to the rest of the season.

“I think (the players are) down, they're disappointed,” Spavital said after Tuesday’s practice. “You know, you put a lot of work into this, you know, we've made strides. And like, how are you gonna respond? There's two ways to go. You either quit or you keep fighting.”

One of the team’s biggest issues from last week still persists. Spavital found out Friday morning before the Cardinals game that he’d be without 24 players due to a mixture of COVID protocols and injuries. Sophomore safety DeJordan Mask joined the inactives during the first quarter of the UIW game after committing a targeting penalty and being disqualified.

It left the team’s secondary decimated. Sophomore Drake Johnson, a scout team member, was tasked with playing nickelback for most of the rest of the game. Cardinals sophomore quarterback Cameron Ward carved the defensive backs up for 376 passing yards and four touchdowns.

“You can say (the defense struggling) was a lot because of the guys playing different spots,”  defensive coordinator Zac Spavital said. “But you know, I went through last year, I'm done with that kind of talk. We've got to find a way to improve, have answers and get things done.”

Jake Spavital said at Tuesday’s practice that 15 players off the two-deep depth chart still weren’t back with the team, many of them in a 10-day quarantine. This comes after the head coach said multiple times during the offseason that Texas State’s COVID vaccination numbers were “in a good place,” estimating that around 70% of his players had gotten the shot.

When asked Tuesday how his staff would plan to minimize the number of players out due to COVID-related reasons, Spavital said the Bobcats “should be good ... once we get these guys back.”

“We've still got a handful of them, but it's just like any other program,” Spavital said. “You know, I've called around all weekend just asking for advice, what other schools are doing. Everybody deals with it — not to the extent that we dealt with it on Saturday. But you know, everybody will have two or three out a game based off of where they're at.”

Two players were supposed to return to practice on Thursday, along with another two on Friday.

Six more will be available again on Saturday in time for Texas State’s road game at Eastern Michigan — if they can clear their protocol. But they’ll have to fly commercially out of Austin at 5:30 a.m. CDT to land in Detroit at 9:22 a.m. EDT to drive half an hour west to arrive in Ypsilanti, Mich., less than four hours before kickoff.

The head coach said it would be tough to put those players on the field considering they haven’t practiced all week. But they’ll be helpful if emergency situations arise, as they did last game.

“You sit there and you talk all offseason about the depth and how we've improved so much. But then when you have 25 guys go out, that's a quarter of your team and you're back to square one,” Jake said. “But like I said after the game, there's no excuse with that. You know, we've still got to execute, we can't make mistakes. We've got to be able to not fumble and miss assignments. And I don't think there's effort issues — they're just straight execution issues.”

The good news for Texas State is that the Eagles are stylistically similar to the teams the maroon and gold have had success against.

Eastern Michigan runs a pro-style, run-heavy offense, mainly utilizing a pair of running backs in senior Jawon Hamilton and freshman Darius Boone Jr., who’ve combined for 320 yards and five touchdowns on 70 carries. When the Bobcat defense went up against Florida International’s offense two weeks ago, another run-first team, the Panthers were held to 3.7 yards per carry and 141 rushing yards.

EMU has also split snaps at quarterback between senior Ben Bryant and junior Preston Hutchinson, though the former seemingly has an edge over the latter to start on Saturday.

“We're gonna expect them to come out very energetic,” senior defensive lineman Nico Ezidore said. “They're at home, they're not trying to lose at home. And they're gonna come out and throw every bullet that they can at us.”

Spavital described the Eagles’ defense as “simple and physical.” The Bobcats may have an advantage in the run game, though, as EMU has allowed 221 rushing yards per game, a bottom-10 mark in the FBS.

“I think (the players are) ready to get back out there and redeem themselves,” Spavital said. “It's an opportunity and that's the beautiful thing about sports, you know, you get to line back up again the next weekend and go out there and fight. You're only as good as your last game, that's how this world works. So we need to strap it up and go out there and compete and play a clean game.”