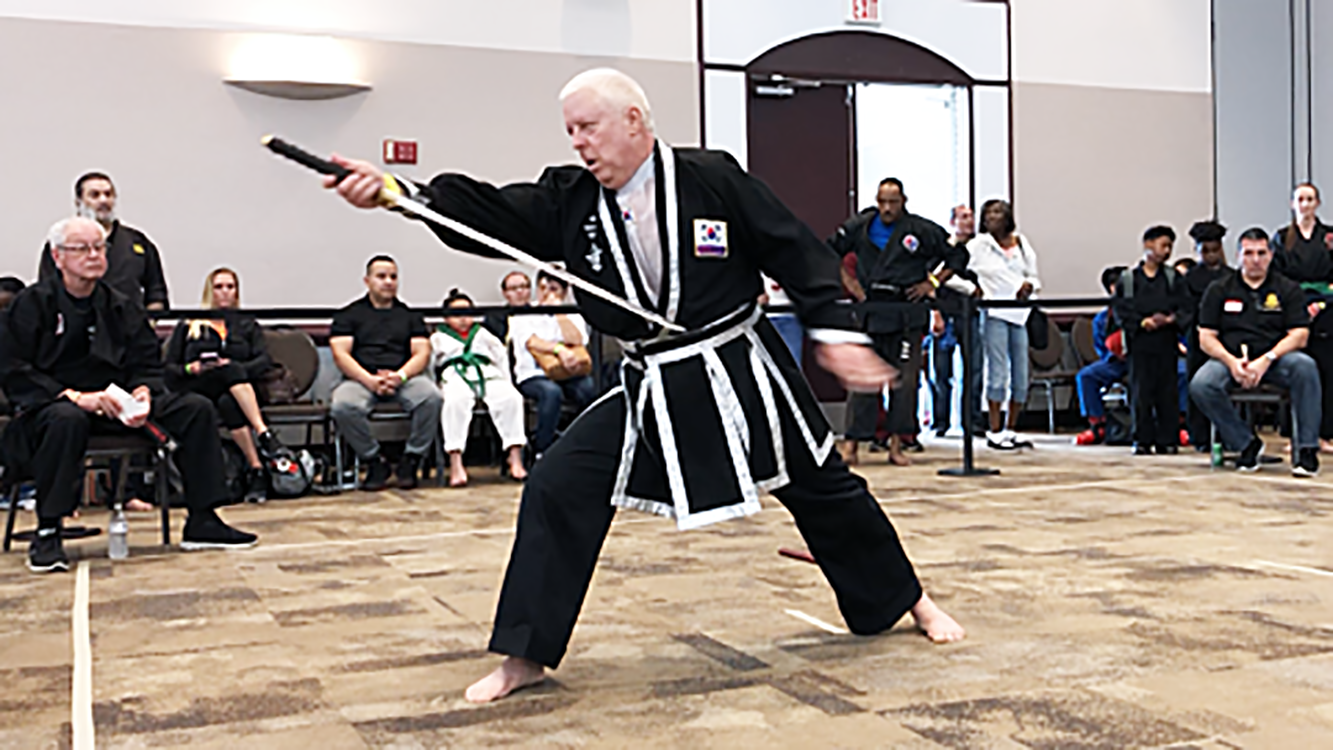 Charles Elder turns back the clock in an age-old sport

Charles Elder had to know how old Zane Moore was.

The two had just competed in the 18-and-up specialty forms round of the Texas Amateur Organizations of Karate (AOK) State Championship in Abilene on Dec. 7. Moore, hailing from Lone Star Black Belt Academy in Watauga, pulled ahead of Elder at the very end, taking first place at the tournament.

“Only in martial arts can people still do that,” Elder said.

The loss didn’t bother Elder too much. He’s won enough rings to put one on each finger — on both hands. He ranks as the top overall competitor in the state with 1,473 points. No other martial artist has more than 1,200.

Battling opponents nearly 50 years his junior isn’t uncommon for Elder anymore. Yet, he’s made it his mission to make his age irrelevant in an age-old sport.

Charles joined the sport out of fear. Living in Houston at 19 years old, he described himself as afraid of his own shadow. He attended a viewing of “Enter the Dragon” in August 1973, featuring legendary fighter Bruce Lee. Charles was enraptured by what he saw.

“The next day, I went into (martial arts) school and I said, you know, 'I'm going to take a beating but I want to learn this stuff, this is just too cool.’ Nobody had ever seen anything like that,” Charles said. “I didn't have to take a beating, but I was prepared to do that. And so I went and got a foundational training.”

Charles found joy learning about joint locks. Throwing someone across the room with a single hand was mesmerizing to him. He stuck with the discipline, working his way up to a black belt and joining the Kuk Sool Won dojo at age 35 to be taught by master Jay Lee.

Still, he didn't know how good he'd become. Charles decided he’d put his skills to the test in 1989 and entered his first tournament. He didn’t place in any categories but finished near the middle of the pack. He thought he could do a little better with more training. Each week, he pushed himself a little harder.

By his fourth tournament, he began placing in the top three. By the end of the year, he was winning most of his divisions. By 1992, he was taking nationals.

“I thought, 'This is pretty cool. All I have to do is work harder, practice harder, train harder, sweat, pay the price and you can win,'” Elder said.

After taking the gold medal at the national tournament, Elder decided to retire from competing. There wasn’t anything left that he hadn’t already won. He’d continue his training, but wouldn’t enter into anymore tournaments.

Elder moved to San Marcos in 1998. At the time, there weren’t any martial arts schools in the area. He worked as a salesman for KLBJ radio station in Austin and later KTSA in San Antonio during the day and would then drive to the YMCA in Dripping Springs to practice individually.

“I was in the wilderness,” Elder said. “I was learning on my own, I was practicing, I had nobody to practice with, so I was doing shadow drills and just working on my own material.”

Elder came out of the wilderness about two years ago with the opening of the Kuk Sool Won gym in San Marcos.

“The school opening up, that was just, it was meant to be,” Elder said. “I called the instructor up and I told him who I was, told him who my master was and he's like, '(Jay Lee) kind of walks on water.' And I said 'Yeah, I kind of think so, too.' And so he had me come over and let me start practicing there and teaching class.”

Elder’s return to school led to his return to competition. He entered his first tournament in 25 years in 2017. He was completely shut out. It hadn’t happened since he broke into the sport. But he figured there was nowhere to go but up and knew what his ceiling could be.

This season, Elder competed in 11 divisions. Most people only enter into four at the most.

“There are only two other people that I compete at these tournaments statewide that'll enter five,” Elder said. “I enter 11 just because I'm having a blast right and I love it.”

Elder now ranks No. 1 in the state in eight of the AOK 13 events he competes in. He’s trained in eight different weapons. He’s had three knee surgeries, torn his rotator cuff in both shoulders and deals with a permanently dislocated collar bone.

He doesn’t plan to stop, either. The 2020 season is just around the corner, beginning on Feb. 8.

“For his age, it's unbelievable,” Courtney said. “Just watching people left and right coming up (at tournaments), talking to him, bowing to him, you know, introducing themselves, he really speaks on their level and they're very impressed by him.”

For Charles, it’s all been worth it. He knows he’s tougher than his shadow.

“I have total respect for anybody that walks in the door of a martial arts dojo for the first time because it took a lot of courage to walk through the door. I know it did for me,” Charles said. “I've paid the price in blood, sweat and tears over the years. I can't be hurt. So there's absolutely nothing you can do about it. You can break my bones but you can't hurt me.”