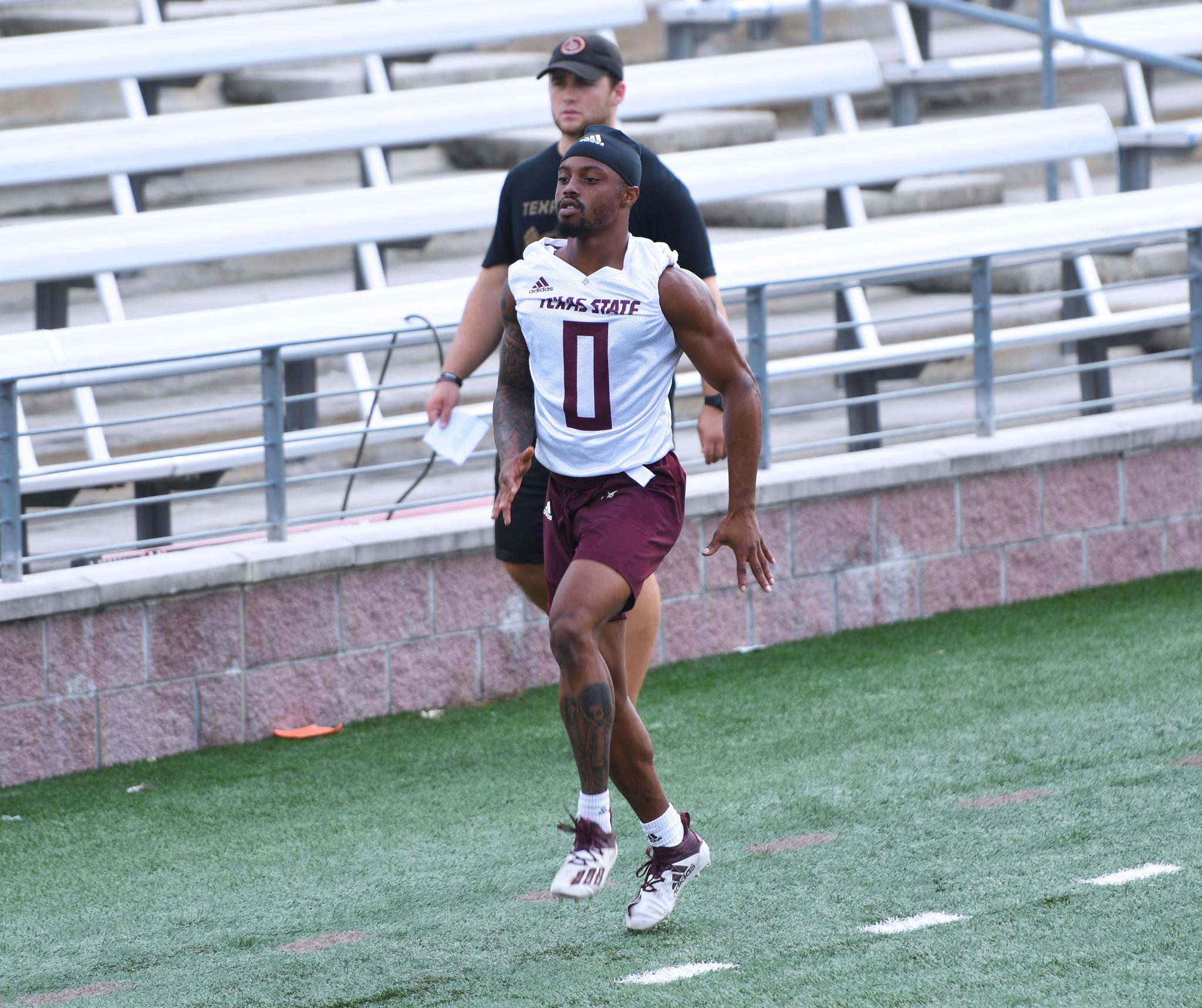 The Climb Back: Morris ready to return to football

Being a fifth-year junior can give anyone a hint his time in San Marcos hasn’t been normal, and it wasn’t just the effects of COVID on eligibility. Morris, a member of the Bobcats’ 2017 signing class, played in every game of the 2018-20 seasons and started in 34 of them. He was the Bobcats’ primary cornerback, regularly guarding each opponent’s No. 1 receiver.

“Baby Jay,” as his teammates and coaches like to call him, went into 2021 with a lot of momentum to build off after leading the team with 69 tackles and finishing third in the Sun Belt with four interceptions in 2020.

Unfortunately for Morris, his 2021 campaign was abruptly cut short.

Morris first had to exit the maroon and gold’s season opener against Baylor on Sept. 4 with a hip injury, and re-aggravated the injury the next week in Miami against FIU on Sept. 11, ending Morris’ season.

The tenured cornerback’s recovery process seemed straightforward at first — but would soon take many twists and turns that played out behind the scenes throughout the last calendar year.

“(This journey’s) been really tough,” Morris said. “When I first got hurt, it’s like (out of nowhere) there was no football. Football is like a way of life for me, you know, it’s something I love to do. So it’s like losing somebody you love. And, you know, just to get it back and almost have it taken from me, I was in a very dark spot the first time. I had to realize certain stuff is out of my control.”

Morris’ rehabilitation process continued to progress throughout 2021 and into 2022 — but then March came around and put another roadblock in Morris’ way.

“I just stuck to the course, you know, (head coach Jake Spavital and defensive coordinator Zac Spavital) they pushed me to get back healthy, I was pushing myself, just working man,” Morris said. “Then I realized I had to have a second surgery coming out in March. With that surgery, they were telling me there was a possibility that I’d have to miss the whole year again. So missing two years probably would have killed me, literally. But (going through) it really taught me a lot and (reinforced some things) which I already knew about myself — I’m strong.

“So I’m not really too hung on about (the injury), once I got back in the motion of doing things, coming back up here, working out, coming to meetings, (I started feeling comfortable again.) I had to get a lot of mental reps because I’m not on the film and stuff, so I learned a lot, and I know that I can do anything I put my mind to. All I gotta do is focus on it.”

Baby Jay’s unique circumstances prompted him to do something that’s become a theme for the program heading into 2022: players speaking in front of the team on a topic that matters to them.

“When I first got here in 2019, I couldn’t get one person to talk to the team,” Jake Spavital said. “Now I’m doing these kinds of team talks where Baby Jay comes into my office, and (he’s) like, ‘I want to talk about mental toughness, because no one knows what I’ve been through and everybody needs to be thinking like me at this right now, because I’ve went through the ups and downs and trust me, I want to be the one that talks about mental toughness.’”

In Morris’ words, his upbringing in Orange prepared him for situations just like these. His father worked 12-hour shifts and would still find a way to take him to practice and camps afterward. His older brother, Maurice Morris, tore every ligament in his knee in high school and still went on to play college football at Sam Houston State and East Texas Baptist.

These figures in Morris’ life set the example for his mentality attacking anything, and their lessons rang even more true throughout his roller coaster of a rehab process.

“I’ve been through a lot in life already,” Morris said. “I was already hit with obstacles and stuff like that (growing up). So I knew if I focus on myself and stay the course that I can always overcome anything, you know, and I want to give a lot of this to my family. (Because of what I’ve seen them go through), I feel like if I see somebody else can do it, I know I can do it. And I’ll never want to let anybody feel like they can get one up on me. I always want to stay the best and be the best. I want to thank my family and people around me who helped me get to where I’m at right now.”

Heading into the Bobcats’ 2022 football season, Morris’ approach is different from any of the past four years he’s been at Texas State. In 2018, he was fighting for playing time and earning a starting spot. From 2019-21 he was an established starter preparing to have one of the highest rep counts on the Bobcat defense.

“This may sound cliché or whatever, but I just want to come back and contribute the best way I can,” Morris said. “The guys have been going really hard since I’ve been hurt, you know, so I just want to come in and be able to help them out whenever I can. I got two more years left, so I could be cool coming in and playing my role and helping out here and there. And when my number’s called, I’m gonna give them what I got. Because I know we’re gonna be pretty good this year, and I’m really excited for the season.”