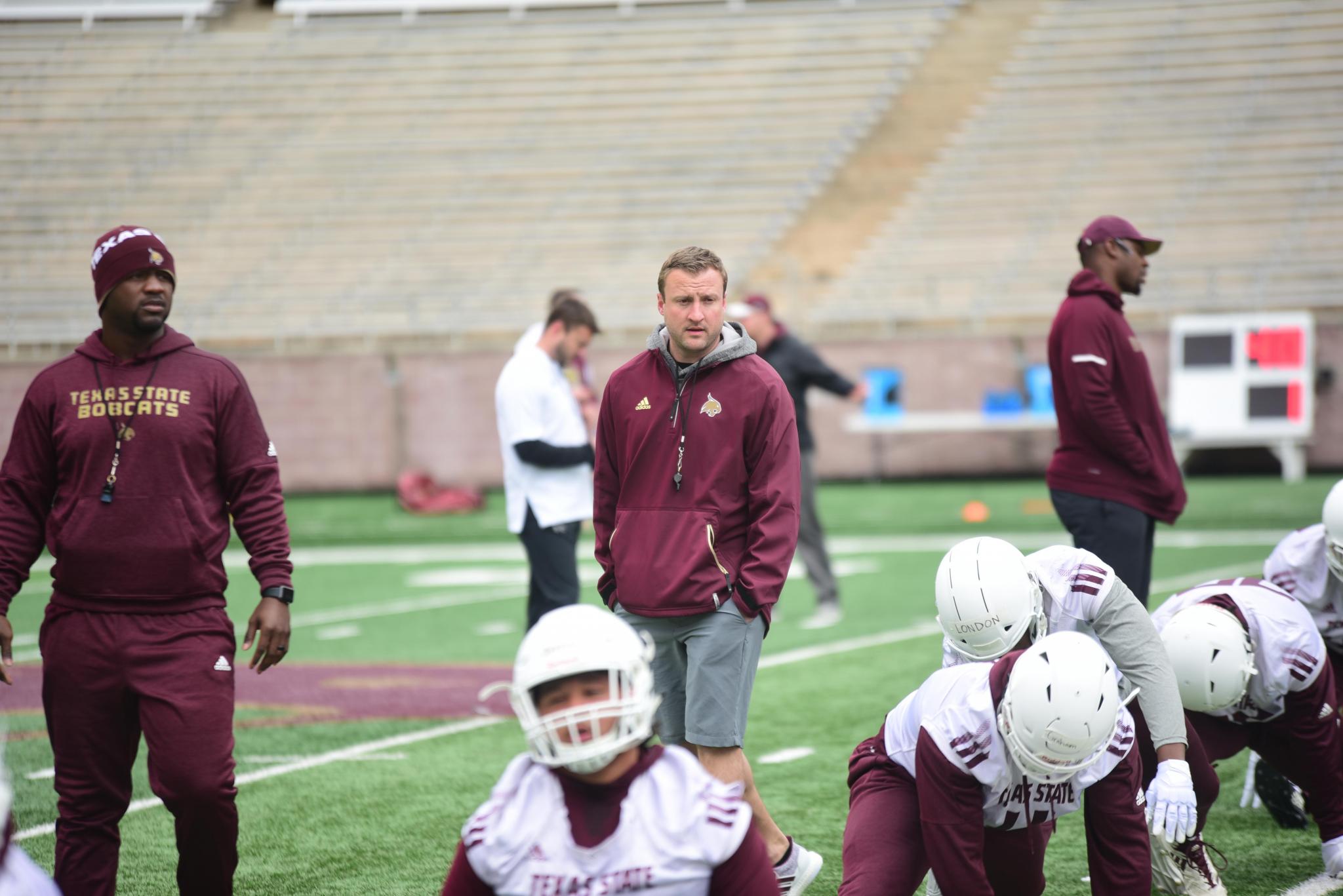 The Bobcats held their first scrimmage of spring practice Saturday afternoon inside Bobcat Stadium. Things got heated as the offense and defense battled against each other.

“I was fired up for it,” Spavital said. “It was the first time we actually got to put the ball down and just see what we were capable of doing. I thought it was competitive on both sides of the ball. You like to as a head coach you come out of it that the defense made some turnovers, some critical stops at times but the offense they sustained some drives. They started getting better as the scrimmage went on and that’s all you can ask for. It was a pretty competitive scrimmage on both sides.”

Junior quarterback Gresch Jensen, who transferred to Texas State from Fullerton Community College in Fullerton, Ca., said the amount of practices and how familiar the players are becoming with the new staff’s scheme led to the chippy scrimmage.

“I think as you can see as guys start feeling more comfortable with things, (it) ramps up a little bit and guys start playing faster not having to think as much,things really start to pick up the competitiveness” Jensen said. “I think it’s been good. We’ve still got a long way to go but it’s been good.”

“It makes us better,” Zac Spavital said. “There’s a few things we’ve got to coach on tape to not retaliate in some areas. But, you know, when it gets heated and it’s a good little matchup of offense and defense that’s fun. It’s fun to see them actually have a little heartbeat and experience out there.”

Offensive coordinator Bob Stitt said it was good to put his offense through challenging situations during the scrimmage.

“It was good to get out and play some football,” Stitt said. “The practice up to this point have just been a lot of running plays and it’s a little more difficult when you have to put them together to get first downs and when you have a negative play that puts you off schedule and it’s tough to get a first down. You put this stuff on tape and go back and learn from it. We had a lot of little things to not keep the drive going and we’ve got to clean that stuff up.”

With a plethora of talent on defense, Zac Spavital used Saturday’s scrimmage to figure what style fits this Bobcat defense best.

“We’re trying to find our identity as coaches as well,” Zac Spavital said. “We went in today with probably a lot more defense in than most teams would but it was two brands of defense. It was an aggressive then it was passive, make them work, and we played both today. We’ll evaluate once we see the tape and kind of move from there. The players we have, we’ve got to find a way to get the best players out there and the best fit of defense to win games.”

Texas State has five practices left before playing in the annual Maroon & Gold Spring Game on April 13. The Bobcats know there is still plenty of work to do before the end of spring ball.

“We’ve got to get consistent and stay away from the negative plays,” Stitt said. “We had some penalties and dropped passes. We had some fumbles and the sacks, you’ve just got to clean that stuff up. That’s what spring ball is all about, we’ve got to get better. We’re going to continue to work on all the things that we want going into next fall. It’s not just trying to have success against our own defense, we’re trying to prepare a good football team next fall.”