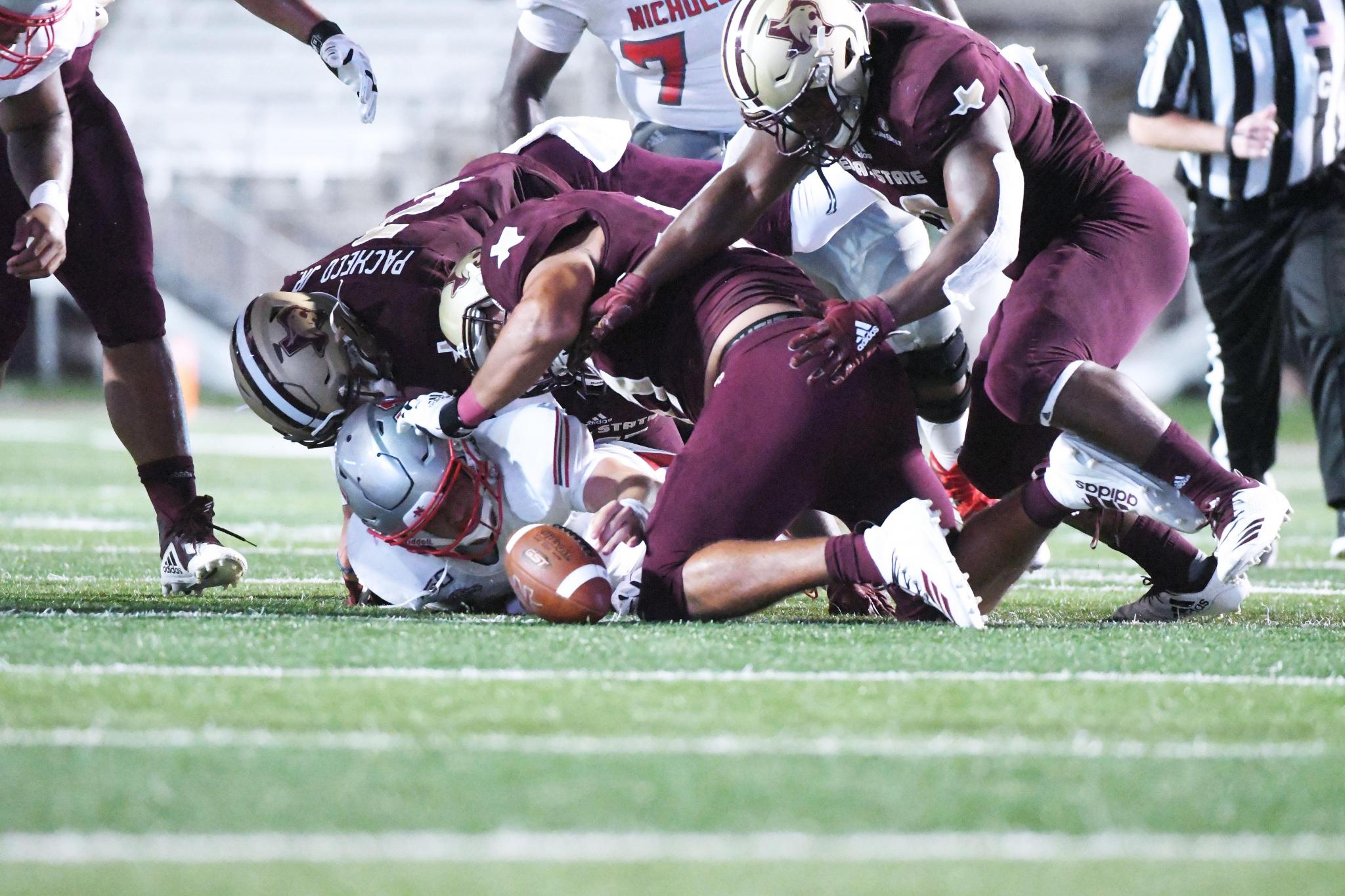 Complimentary ‘Cats come up with 24-3 win over Colonels

Jake Spavital called last week’s win against Georgia State “the most complimentary football game” Texas State had played all year. But the Bobcats might have topped themselves on Saturday.

Texas State held Nicholls to 220 yards in its game against the Colonels inside Bobcat Stadium and scored 21 unanswered points in the second half to take a 24-3 victory and win the Battle for the Paddle.

“I can't be more proud of this team and just how they've handled it and just how scrappy they are to just find wins,” head coach Jake Spavital said. “The whole goal was to be 2-0 after night. So we're sitting 2-0 in our new season that we've been talking about and I couldn't be happier for these kids.”

Both teams struggled to find a rhythm in the first half, leading to a 3-3 tie at the intermission. Nicholls (2-2, 1-0 Southland) outgained Texas State (2-3, 1-0 Sun Belt) 108 yards to 96, and picked off junior quarterback Gresch Jensen in the second quarter. Jensen led a turnaround for the offense on the first drive of the next half, though.

The Bobcats began the third quarter on their own 22-yard line. Junior running back Caleb Twyford rushed on the opening two plays for 15 yards. Jensen connected on his next three passes for another 21. Twyford picked up another two yards on the next play to move into Colonels territory and pick up a first down.

An 11-yard carry from Twyford pushed Texas State into the red zone and Jensen capped off the drive a with a short dart to freshman tight end Micah Hilts, who cashed in for a 12-yard touchdown to give the maroon and gold a 10-3 lead.

“I thought the defense played really well. And us as an offense, I think we got things going in the second half,” Jensen said. “We just kind of made the adjustments. And then we went from there. I thought guys really made plays on both sides of the ball.”

Two plays into Nicholls’ next series, Colonels senior quarterback Chase Fourcade targeted a receiver on the right side of the field, but the pass was broken up by sophomore cornerback Jarron Morris. Senior safety JaShon Waddy snagged the ball midair for an interception and returned it 12 yards to the visitors’ 26.

Multiple penalties on the return backed the Bobcats up to their own 44-yard line, but Jensen dialed Hilts up again for 21 yards to move to the Nicholls’ goal line. Jensen snuck it in for the score on the next play.

“We had a couple three-and-outs, forced the interception, we forced the field goal,” senior linebacker Nik Daniels said. “I think we did our part getting the ball back to the offense.”

Jensen finished the night completing 22-of-29 passes, throwing for 253 yards, two touchdowns and an interception and also ran four time for one yard and a score. Redshirt freshman wide receiver Jah’Marae Sheread was Jensen’s main target, grabbing five passes for 43 yards, but sophomore Javen Banks gained the most yards, reeling in a 77-yard dime for a touchdown. Twyford led the team on the ground with 17 carries for 73 yards.

Senior linebacker Bryan London II was shaken up on a play early in the first quarter and played sparingly throughout the rest of the game. Daniels picked up the slack in his absence, collecting nine tackles, one sack and two tackles for a loss.

The performances on both sides of the ball earned Texas State its widest winning scoring margin since Oct. 1, 2016 in a 48-17 home win over Incarnate Word.

“The defense is playing stout at times,” Spavital said. “And even when the offense isn't and having success, they're still playing at a high level.”

“That's probably one of the greatest feelings that you can have as a coach and a team, is having a win going into a pile of five weeks,” Spavital said. “I think these kids are excited for their performance. They're happy to win two games in a row … It's something to build off of. But you know, we still gotta keep stacking days and keep continuing to get better and make sure that we keep it healthy as well.”