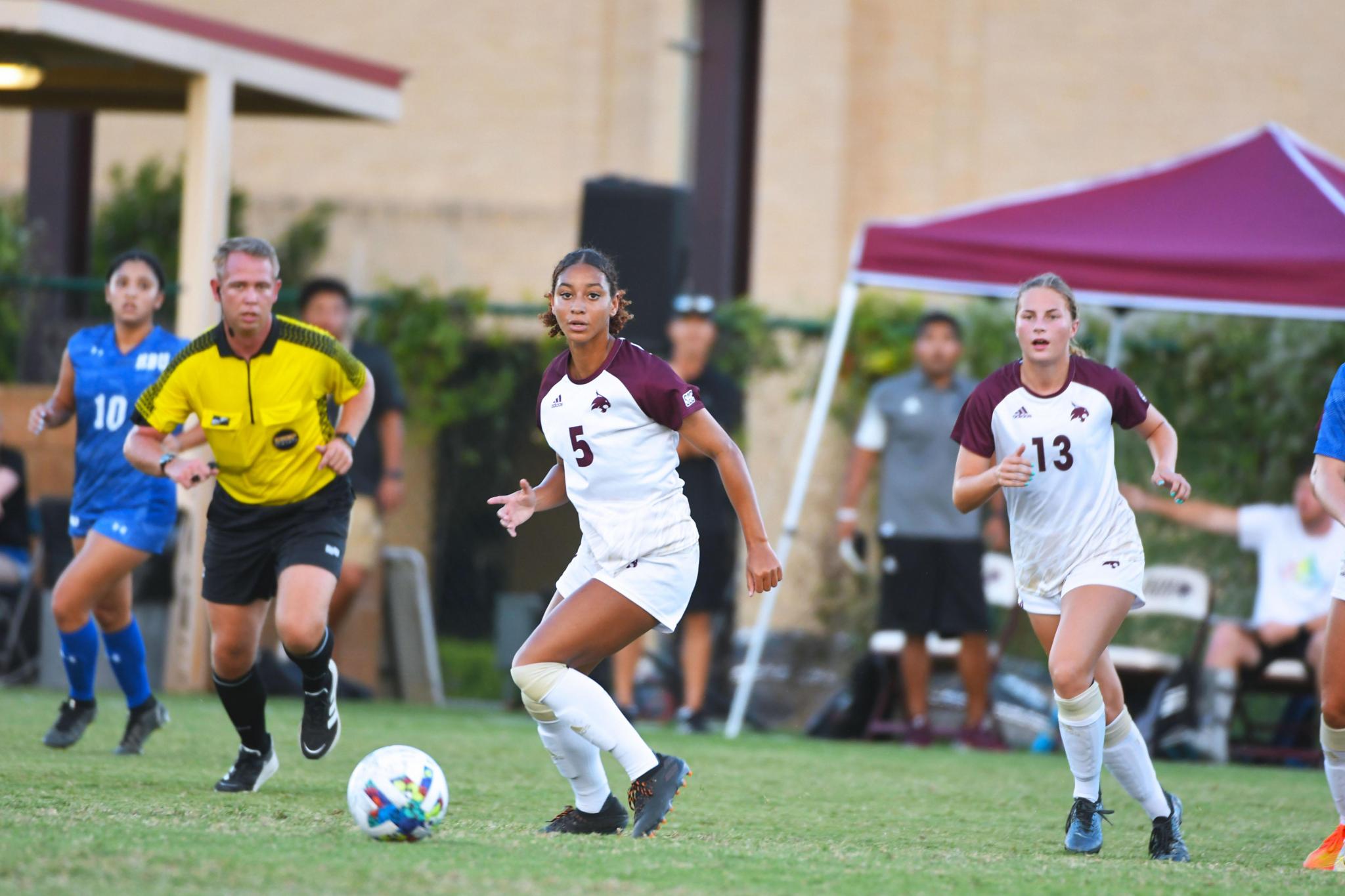 Texas State continued its undefeated streak Sunday night, as the ‘Cats came away with their fourth win of the 2022 season against Houston Baptist at Bobcat Soccer Complex.

An early penalty kick and suffocating defense propelled the Bobcats to a 2-1 victory, making them the second team in program history to start a season 4-0-0.

The maroon and gold have been stellar defensively to start the year, only allowing two goals from their opponents since the start of the season. Texas State’s relentlessness on offense was also showcased — the Bobcats tallied up ten shots on goal, adding to their Sun Belt-leading total of 36 on the season.

“We’ve got to change that from shots on goal, we’d rather (have) goals scored so that’s the part where we got to get better, but we know that we’re creating a lot of good opportunities,’’ head coach Steve Holeman said. “But, you know, when we get into conference play, we’re not going to get 20 shots every game and we know that so we’ll continue to work and improve and get better.”

Sophomore Madi Goss was able to get the Bobcats on the board within the first four minutes of the match, but after that both teams struggled to find the back of the net. It wasn’t until the 61st minute that sophomore Zoe Junior scored her second goal of the season, putting Texas State up 2-0 off of junior Haley Shaw’s assist.

“I knew that there was space behind, so I was making sure to time my slashing run across the backline and Haley played the perfect ball and I was able to keep composure, cut it back and shoot the ball,” Junior said. “I had a tough game finishing today, so I was really glad that I could finally put it away.”

The Huskies (0-2-1) were able to put pressure on the Bobcats late in the game after scoring and cutting the lead within one inside the last ten minutes. However, Texas State was able to hold on defensively to seal the match. Despite the success, Coach Holeman and the team have taken things one game at a time and will continue to do so.

Texas State is officially midway through non-conference play with four games left to go before the maroon and gold’s Sun Belt Conference opener against Arkansas State on Sept. 17.

With two exhibitions and four regular season matches under their belt, Holeman and his staff feel like they’re able to start identifying specific areas the team needs to focus on in the second half of non-conference play before games start to count in the standings. One of the keys is something the ‘Cats have been working on since their season opener — finishing at the net and capitalizing on their shots when they take them.

“Obviously (we) couldn’t ask for a better start to be 4-0, but we just talked to the team about keeping everything in perspective. (We’ve) got to learn from the games even when we win,” Holeman said. “I think we kind of left them hanging in the game, we gotta learn to avoid those situations.”

The Bobcats will look to continue their undefeated start to the regular season and jump back into action against Kansas City on Sept. 1 at Bobcat Soccer Complex in San Marcos at 7 p.m.