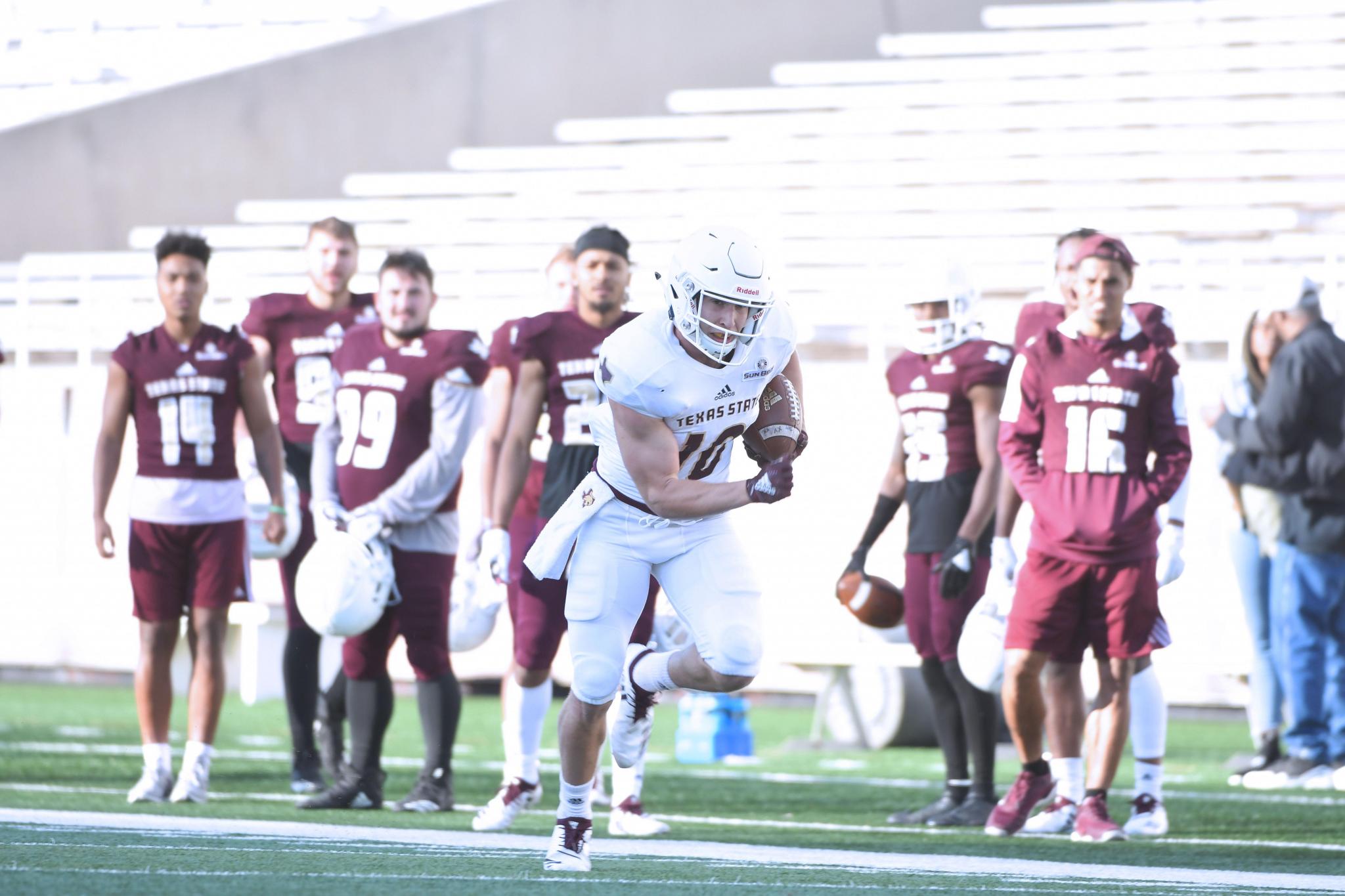 Countdown to Kickoff: Bobcats battle on the road with Red Wolves

Former head coach Everett Withers was dismissed the Sunday after a 12-7 loss at Troy on Nov. 17, 2018, leaving defensive coordinator and interim head coach Chris Woods less than a week to prepare the team for its season finale inside Bobcat Stadium.

Texas State defeated the Red Wolves once on Nov. 20, 2014, winning the game 45-27, but had lost in the other four matchups. This time was no different. Arkansas State won the Nov. 24 contest, 33-7, finishing the regular season at 8-5 and 5-3 in Sun Belt play and claiming the West Division’s runner-up spot. The team went on to fall to Nevada in overtime, 16-13, on Dec. 29 in the NOVA Home Loans Arizona Bowl.

The Red Wolves were recently voted to finish second in the West Division again and third overall in the league in the Sun Belt’s 2019 Coaches Poll. But trailing just four points behind favorites Appalachian State and Louisiana, with 42 points each, suggests Arkansas State has the potential to earn its place in the conference championship game.

“(Head coach Blake Anderson) managed to bring stability to one what was, coaching-wise, one of the more unstable places in FBS — in 2014, he became the fifth ASU head coach in five years,” Bill Connelly said in his preview of the Red Wolves on SB Nation. “ASU survived because of a strong, burgeoning football culture and continuity behind the scenes, but Anderson stabilized things up top. The Red Wolves have won more steadily than any Sun Belt team, having now attended bowls for eight straight years.”

Arkansas State’s offense was one of the best at moving the chains last season, ranking 16th in the NCAA with 466 yards per game. Most of them came from former quarterback Justin Hansen, who was 18th in the country with 3,447 passing yards to go along with 27 touchdowns. Junior Logan Bonner will likely be his replacement, but has only thrown the ball 53 times in his career.

Bonner should be supported by an experienced cast of playmakers. Sophomore running back Marcel Murray led the team with 860 rushing yards and eight scores. He now has the backfield mostly to himself with former tailback Warren Wand and Hansen, the second- and third-leading rushers last season, respectively, both gone. Senior receiver Kirk Merritt also returns after grabbing 83 passes for 1,005 yards and seven touchdowns. Junior tight end Javonis Isaac only caught 12 receptions in 2018, but converted them into a hyper-efficient 210 yards and four touchdowns.

“You don’t become the steadiest winner in your conference without generating layers of star talent, and ASU’s defense could improve enough to absorb a slight drop-off from the offense,” Connelly said. “This program is sturdily built, even if said sturdiness will get a bit more of a test than normal this fall.”

The Red Wolves were stingy defending the pass last year, giving 175.9 yards through the air per game, 12th fewest in the NCAA. However, they struggled with stopping the run, averaging 200.7 yards allowed, the 28th worst mark in the country.

Redshirt senior defensive back Darreon Jackson is back after posting a team-best 84 total tackles. Senior defensive back B.J. Edmonds and junior cornerback Jerry Jacobs will round out the secondary, as they combined for seven interceptions and 11 pass deflections last season.

Junior pass rusher William Bradley-King notched six sacks in 2018 and will be joined by seniors Forrest Merrill and Kevin Thurmon, who combined for 112 stops and 7.5 sacks, on the defensive line.

“The pass defense was aggressive and efficient for most of the season, but if a team could run on the Red Wolves, they would run on them for 60 full minutes,” Connelly said. “Alabama, Georgia Southern, App State, and UL-Lafayette averaged 43 rushes and 275 rushing yards per game.”

SB Nation ranks Arkansas State as the No. 70 team in the FBS, ahead of Texas State at No. 102. It gives the Red Wolves a 76 percent chance to beat the Bobcats on Oct. 26 at 6 p.m. in Jonesboro, Arkansas, predicting the hosts win by 12.3 points and projecting the team to finish the regular season at 8-4.