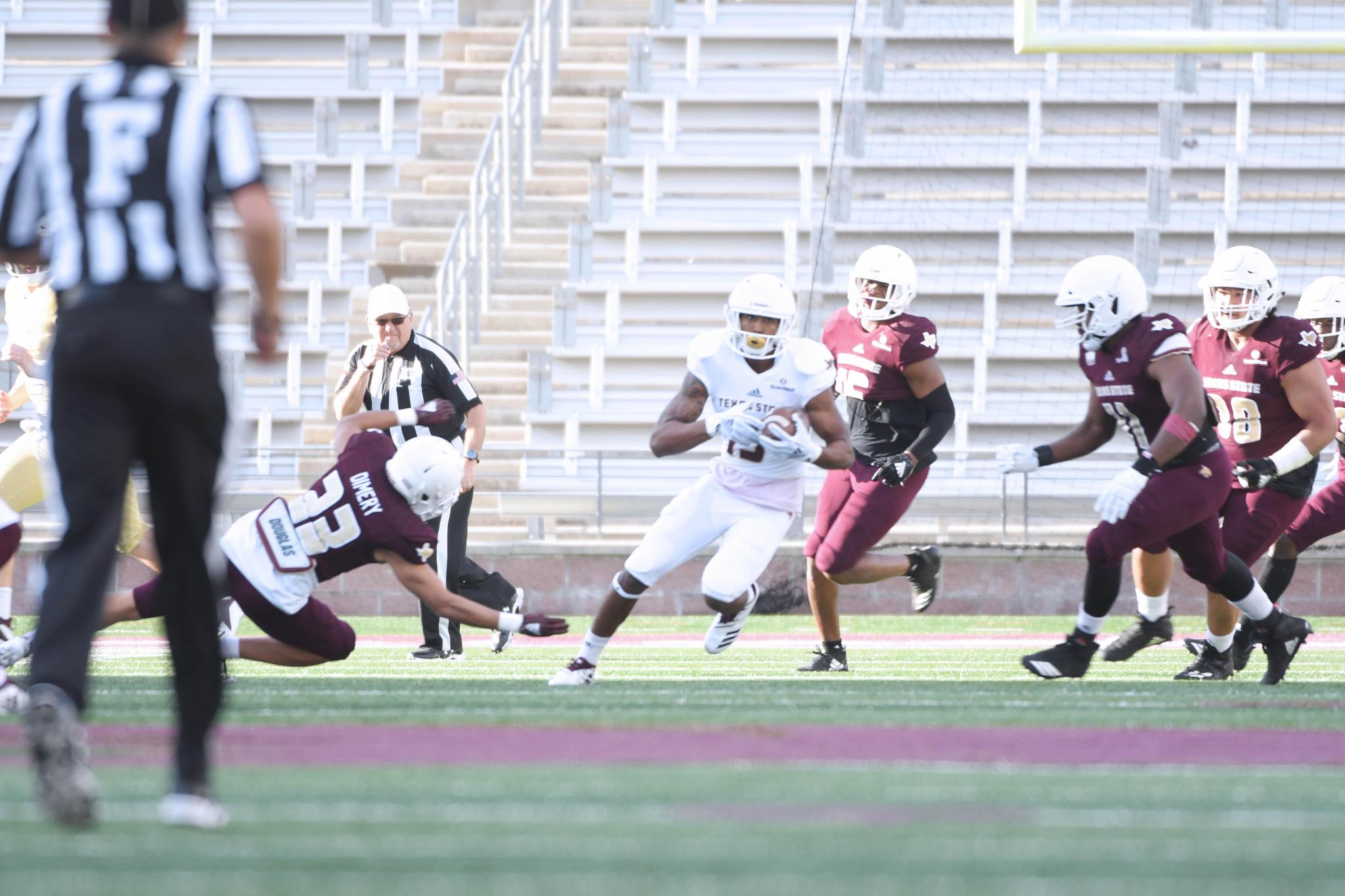 Texas State takes a break from non-conference play in week four of the season to begin league play against the only Sun Belt opponent it beat last season.

Georgia State comes to San Marcos on Sept. 21 to break the all-time record with the maroon and gold, currently tied at 3-3. Texas State’s 40-31 victory on Nov. 3, 2018 halted a three-game losing streak against the Panthers, two of the losses coming inside Bobcat Stadium. The Bobcats did win in their first two meetings with Georgia State in 2013 and 2014, including a 54-31 victory in Atlanta on Nov. 29, 2014, the largest margin of victory in the series.

The Panthers had one of the least experienced teams in the conference entering last year and suffered through a 2-10 season. Their two wins came against Kennesaw State and ULM and the team only stayed within single digits of their opponents two other times.

Now, Georgia State might be in for a bounce back year.

“The Panthers ended up finding more offensive answers than expected and now return more of last year’s defensive production than I would have anticipated a year ago,” SB Nation’s Bill Connelly said in his preview of Georgia State. “And after signing the No. 3 class in the Sun Belt in 2018, Elliott landed the fifth in 2019 despite the awful season.”

The offensive unit is surprisingly seasoned, with the majority of its top producers coming back this year. The Panthers were above average as the No. 62 rushing team in the NCAA. It’s top two running backs, senior Barnett along with sophomore Seth Paige, will look to build on their combined 892 yards and 11 touchdowns from last season. They’ll be guided by a solid offensive line featuring five players with some starting experience.

Starting quarterback Dan Ellington paced the team on the ground, though, carrying the ball 159 times for 625 yards and five scores. The senior was a little underwhelming with his arm, throwing for 2,119 yards, 12 touchdowns and five interceptions, but should find familiarity among his pass-catchers this season. All but one receiver returns, including sophomore Cornelius McCoy, who was second on the team with 35 catches for 495 yards.

“(Five of the returning) receivers were targeted at least 20 times; all of them produced at least a 60 percent catch rate and positive marginal efficiency numbers,” Connelly said. “And three of the five (Cornelius McCoy, Devin Gentry, Tamir Jones) averaged at least 13 yards per catch. Plus, star 2018 recruit Sam Pinckney caught three of five passes for 82 yards while redshirting.”

Defensively, the Panthers were one of the worst units in the country, ranked 126th with 490 yards allowed per game. To be fair, key players from their secondary were banged up for most of the season.

Senior defensive backs Remy Lazarus and Cedric Stone both started and played important roles in the win over Kennesaw State but both also missed time due to injury. They’ll be back this year and the team will hope to have them at full strength.

Georgia State was decent at times defending the run, but gave up too many big plays to be consistent.

“When you gained five yards on the ground, you probably gained another 15, too,” Connelly said. “GSU was 129th in rushing marginal explosiveness, which measures the magnitude of your successful plays. The Panthers had maybe the most all-or-nothing run defense in FBS.”

Senior linebacker Ed Curney returns after leading the team with 81 tackles, along with most of the defensive line. The Panthers only registered 13 sacks in 2018, the fewest in the Sun Belt, but that number should improve if the secondary can give the pass rushers more time. Junior defensive end Javonte Lain should lead the way after picking up two sacks last season.

SB Nation projects Georgia State to be the No. 114 team in the country, behind Texas State at No. 102. It gives the Panthers a 30 percent chance to beat the Bobcats, predicting the visitors lose by 8.9 points. SB Nation also expects GSU to finish the year at 4-8.