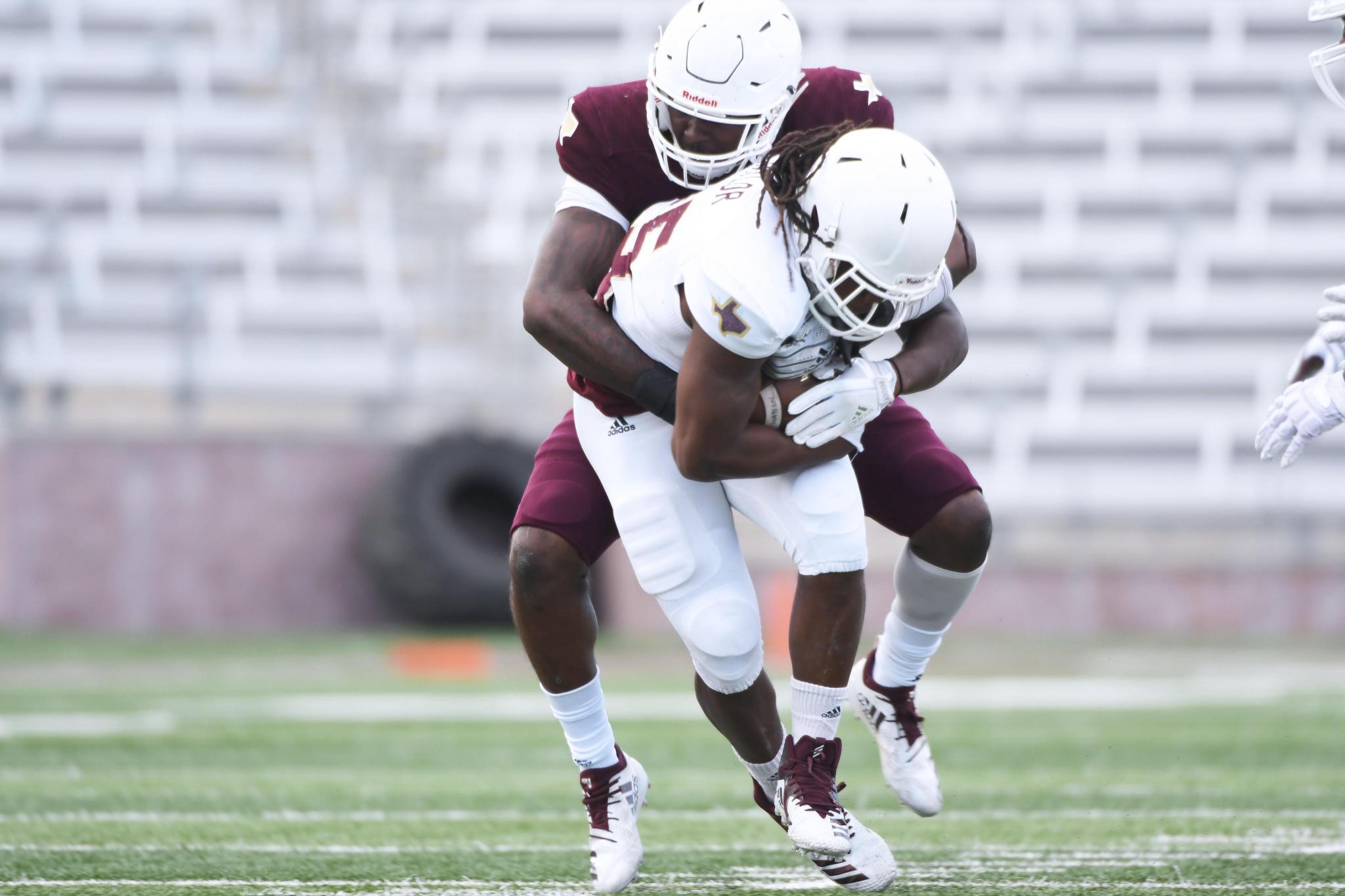 Countdown to Kickoff: Bobcats match up with Mustangs in Dallas

Texas State follows up its home opener with its second road trip of the season, heading north on I-35 to Dallas for a matchup with the Mustangs.

The Bobcats will square off with SMU on Sept. 7 at 6 p.m. inside Gerald J. Ford Stadium for the second time in history. The Mustangs won the first high-scoring contest against the maroon and gold, 47-36, on Sept. 6, 2008.

Head coach Sonny Dykes missed out on a bowl game in the 2018 season, his first full year with the team. SMU finished 5-7 overall and 4-4 in the American Athletic Conference.

“One other thing we know about Dykes by now: his team is going to be streaky as hell,” SB Nation’s Bill Connelly said in his preview of the Mustangs. “In his first season at SMU, his Mustangs went 0-3, then streaked to the precipice of bowl eligibility by winning five of seven. They then lost to Memphis (forgivable) and Tulsa (less so) to come up just short.”

Dykes runs an old-school air raid offense, with passing and tempo being his main focus. SMU did well throwing the ball last year, gaining 271.7 passing yards per game, which ranks 27th in the NCAA and third in the conference. Last year’s starting quarterback, senior Ben Hicks, transferred this offseason to Arkansas but Dykes brought in former University of Texas  at Austin starting quarterback Shane Buechele to supplant him.

Buechele, a four-star recruit out of Arlington Lamar, should be able to step onto the field immediately as a graduate transfer despite playing in all three of his years with the Longhorns. Buechele had a promising freshman season, completing 236 of his 391 passes for 2,958 yards and 21 touchdowns but struggled as a sophomore, dealing with injuries and competing with junior Sam Ehlinger for the starting spot. Ehlinger earned the job outright last season, relegating Buechele to backup status and motivating him to find a new home.

Buechele should settle into Dykes’ system nicely, with the Mustangs’ top two targets from last year both returning. Senior Shane Proche caught 93 passes for 1,199 yards and 12 touchdowns, leading the team in all three categories, and junior Reggie Roberson Jr. emerged as a strong No. 2 target with 52 receptions for 802 yards and six scores.

SMU’s passing game may be one of the strongest in the country, but its ground game is one of the weakest. The team ranked in the bottom 12 of the NCAA with 115.5 rushing yards per game and in the bottom 10 with 3.5 yards per carry. Connelly believes the issues stem up front.

“The offensive line was a pile of wreckage,” Connelly said. “Nine players started at least two games, and only two started all 12. Freshmen and sophomores accounted for 29 of 60 starts. There were two particularly experienced pieces up front (left tackle Chad Pursley and left guard Nick Natour), and they missed nine games between them.”

Still, the Mustangs lost their top rusher, Braeden West who carried the ball 138 times for 589 yards and six touchdowns, and will turn to a senior pairing who for just five more touches than West. Ke’Mon Freeman ran for 339 yards and six scores on 75 attempts last year and while Xavier Jones eclipsed the 1,000-yard mark in 2017, he only gained 311 yards and two touchdowns on 69 carries in 2018.

SMU’s defense is a little below average, ranking 93rd in the NCAA with 430 yards allowed per game, but there’s no glaring weaknesses within the unit.

The team had 22 players reach double-digit tackles last season. Sixteen of them return this year.

Senior linebacker Richard Moore led the team in both total tackles (92) and sacks (5) and was second with 13.5 tackles for a loss. He’ll patrol the opposing backfield along with senior defensive end Delontae Scott, who registered 4.5 sacks of his own.

Senior defensive back Rodney Clemons was third on the team with 72 total tackles and was a big help against the passing game, too, with four pass deflections and an interception. Senior cornerback Kevin Johnson and senior safety Patrick Nelson will round out the secondary, picking off two passes each in 2018.

SB Nation projects SMU to be the No. 85 team in the country, ahead of Texas State at No. 102. It gives the Mustangs a 70 percent chance to beat the Bobcats, predicting the hosts win by nine points. SB Nation also expects SMU to finish the year at 5-7.