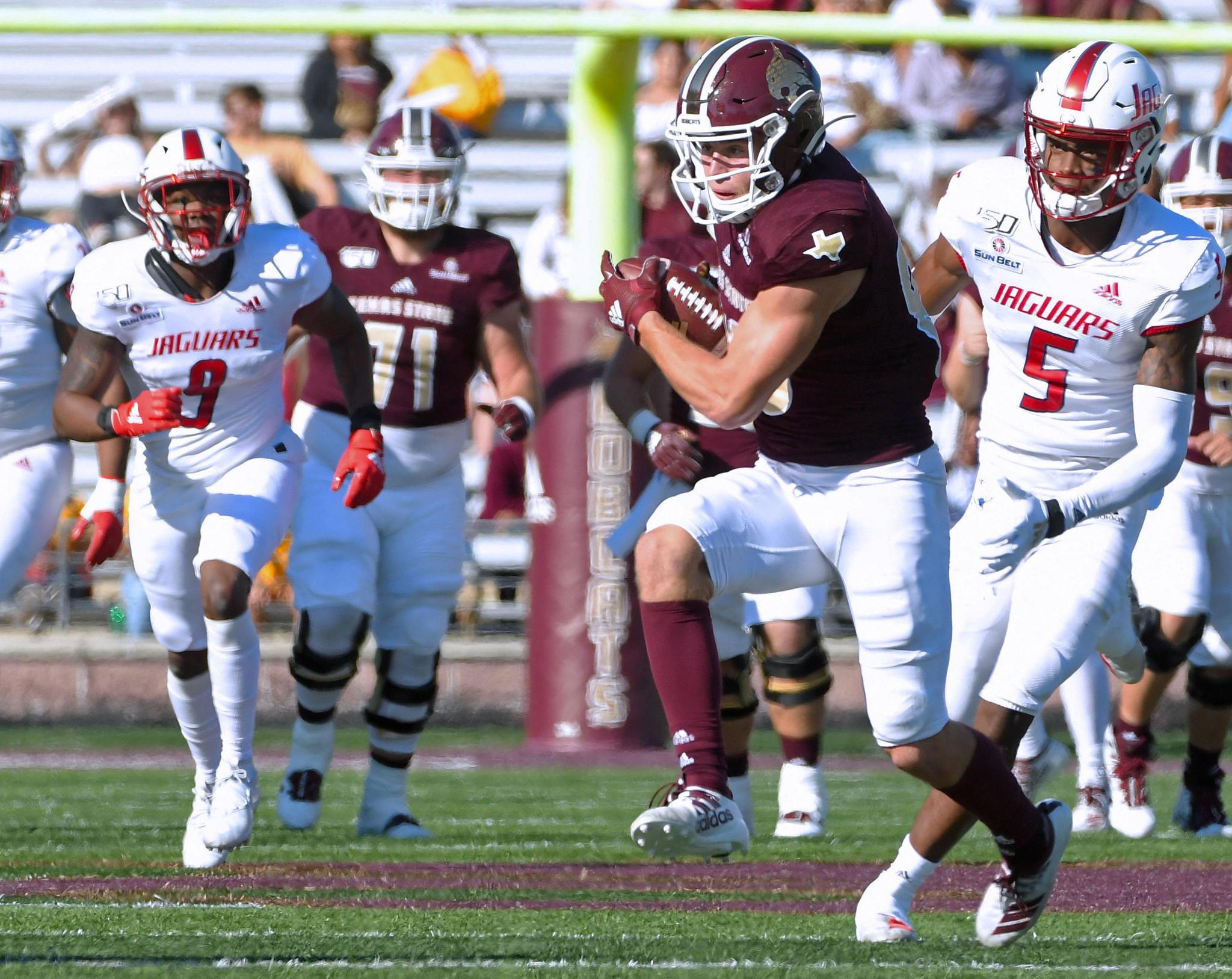 Texas State versus South Alabama has remained under the radar as one of the Sun Belt’s most competitive series.

The two schools are each 3-3 all-time against each other, with the average margin of victory being 7.7 points and the home team winning every game. The endings of each game are often dramatic. In 2018, the Bobcats coughed up a 24-10 lead, failing to score after their first drive of the third quarter and giving up 25 unanswered points to lose 41-31 in Mobile. The next year, the Jaguars made it down to the 11-yard line with 1:15 left in the game but missed a 28-yard field goal to lose in San Marcos, 30-28.

The teams were tied with 10:30 to go in 2020’s matchup, but South Alabama pulled away late, claiming the 30-20 win to tie up the series. The Jaguars went on to finish the season 4-7 overall and 3-5 in conference play, leading to the firing of former head coach Steve Campbell. They’ll now look to former Indiana defensive coordinator Kane Wommack to guide them through a tough schedule into bowl contention.

USA’s offense ranked second-to-last in the Sun Belt, generating 358.5 yards per game. Sophomore quarterback Desmond Trotter took the large majority of snaps behind center, throwing for 1,917 yards and 11 touchdowns with four interceptions. But he was also outplayed at times by redshirt freshman backup Tanner McGee, who came off the bench and sparked a 38-31 comeback win against Arkansas State late in the year. Senior signal-caller Jake Bentley also transferred in from Utah, making the team’s quarterback picture even murkier.

Whoever wins the starting job will have talented receivers to target. Junior wideout Jalen Tolbert finished seventh in the country with 1,085 yards on 64 catches to go along with eight touchdowns. Junior Jalen Wayne snagged 33 passes for 418 yards and a score and should see more opportunities after the departure of Kawaan Baker, who was drafted by the New Orleans Saints in the seventh round of the NFL Draft. But the run game will need to see major improvements after averaging just 2.9 yards per carry as a team. Mississippi State transfer running back Kareem Walker may help in that department.

The Jags’ defense performed slightly better, ranking seventh in the Sun Belt by giving up 436.4 yards per game. The unit lost two all-conference selections but bring back four of its top five tacklers, including All-Sun Belt Second Team junior safety Keith Gallmon, who ranked third on the team with 84 stops and also added 10 pass deflections and a pick. He’ll be joined in the secondary by corners Davyn Flenord and Devin Rockette, who combined for eight pass breakups and two interceptions. USA will rely on senior edge rushers Chris Henderson and Shawn Jennings up front — the pair produced 3.0 sacks and eight quarterback hurries combined.

Texas State hosts South Alabama inside Bobcat Stadium in the maroon and gold’s first league game on Oct. 9. Bill Connelly of ESPN’s SP+ projections predict a 4-8 overall record for the Jaguars in 2021, including a 2-6 record in Sun Belt play. Connelly gives the Bobcats a 59% chance to win, making the USA matchup a “relative toss-up.”