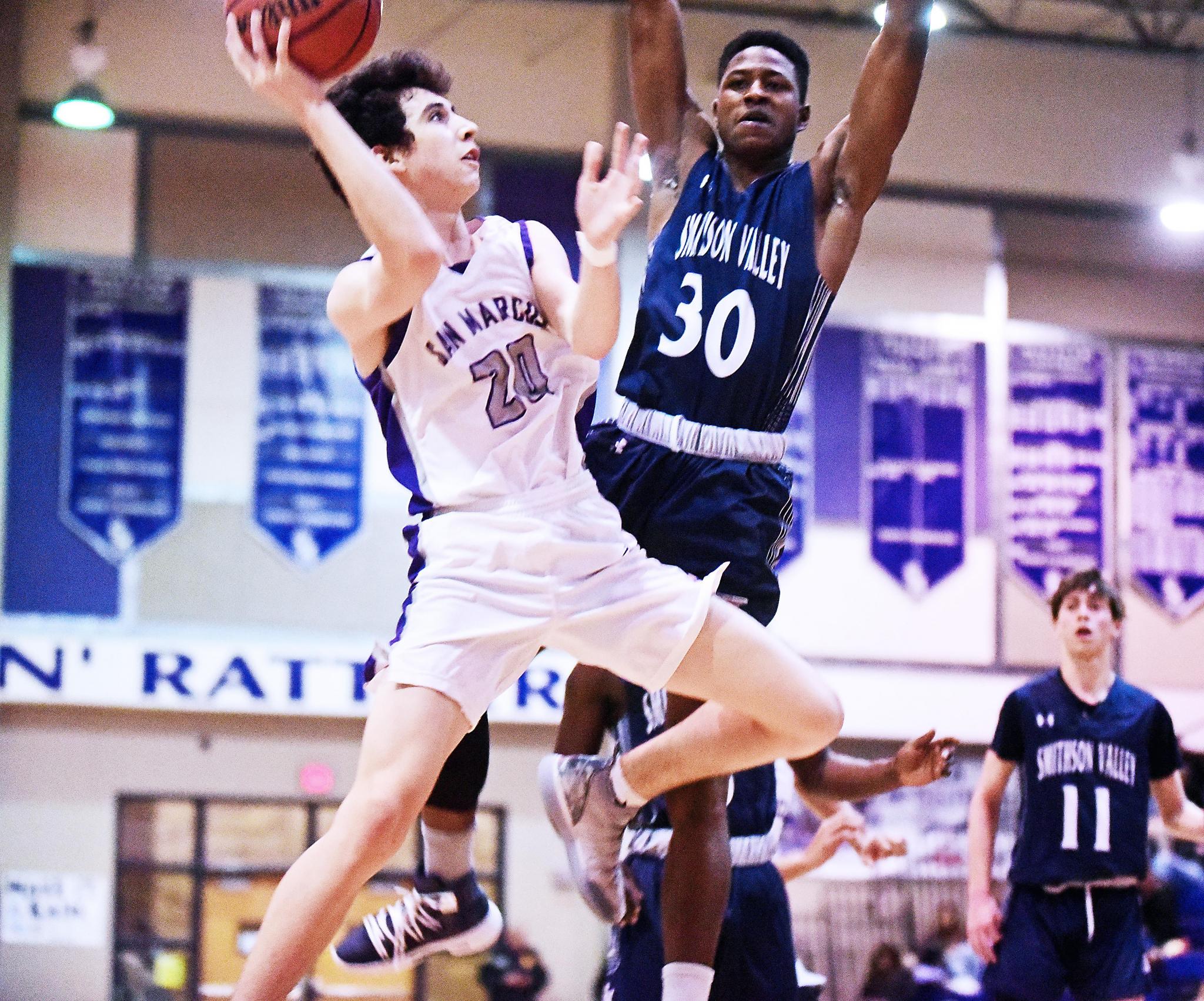 A 3-pointer at the halftime buzzer kept the Rattlers in the game.

Junior guard C.J. Valencia pushed the ball up to senior guard Pablo Rios IV on the fastbreak as the clock was ticking down. Valencia relocated to the left corner while Rios darted toward the rim. The senior drew the defensive attention inside and hooked a pass to the junior, who knocked down the trey in time to cut San Marcos’ deficit down to 33-26.

The Rattlers never seemed fully out of it, but could never take back the lead. San Marcos fell to Smithson Valley inside the Snake Pit Tuesday night, 73-54, in the final home game of the regular season.

The third quarter began the same way that it ended for the Rattlers. Valencia found junior wing Josh Deleon in the right corner on the opening play of the half, who canned the triple. The hosts kept turning to Deleon from there.

A minute and a half later, Deleon used a screen from senior forward Mason Green and the top of the key to get to the rim and convert an and-1 layup and free throw. Deleon went on to score the next five baskets for San Marcos, three of them coming behind the arc. Valencia drained one more shot from deep at the end of the half to bring the Rattlers within one point of the Rangers, down 52-51.

San Marcos scored 25 points in the third quarter. Twenty of them came from Deleon.

“I was just taking what I could get,” Deleon said. “My teammates were really getting me open and we were feeding off of each other and that just led to me getting good shots … I was just feeling more comfortable and I let it go and it just went in. I could just attribute that to my teammates. They were making plays, hitting me when I was open. I just got hot.”

The momentum didn’t carry over into the fourth, though. Smithson Valley’s defense was more intense, forcing the hosts into making bad decisions and turning the ball over. The team also struggled to find good shots, failing to make a field goal during the quarter.

Two free throws from Rios and one from Deleon were the only points Rattlers could find. The Rangers took the victory, 73-54.

Deleon led the team with 24 points on the night, followed by Valencia with 15 and Rios with seven.

San Marcos (9-24, 2-11) will conclude its season on Tuesday when it travels to face New Braunfels Canyon at 7 p.m. Acker said he expects his team to give its best effort of the season to end with a win.

“These guys are character guys,” Acker said. “They’ve battled through and been really resilient this year. They ain’t gonna lay down. So, they’re going to go over there with the intent to win the game. We’ll prep, we’ll do everything we’ve been doing and we hope the outcome’s in our favor.”