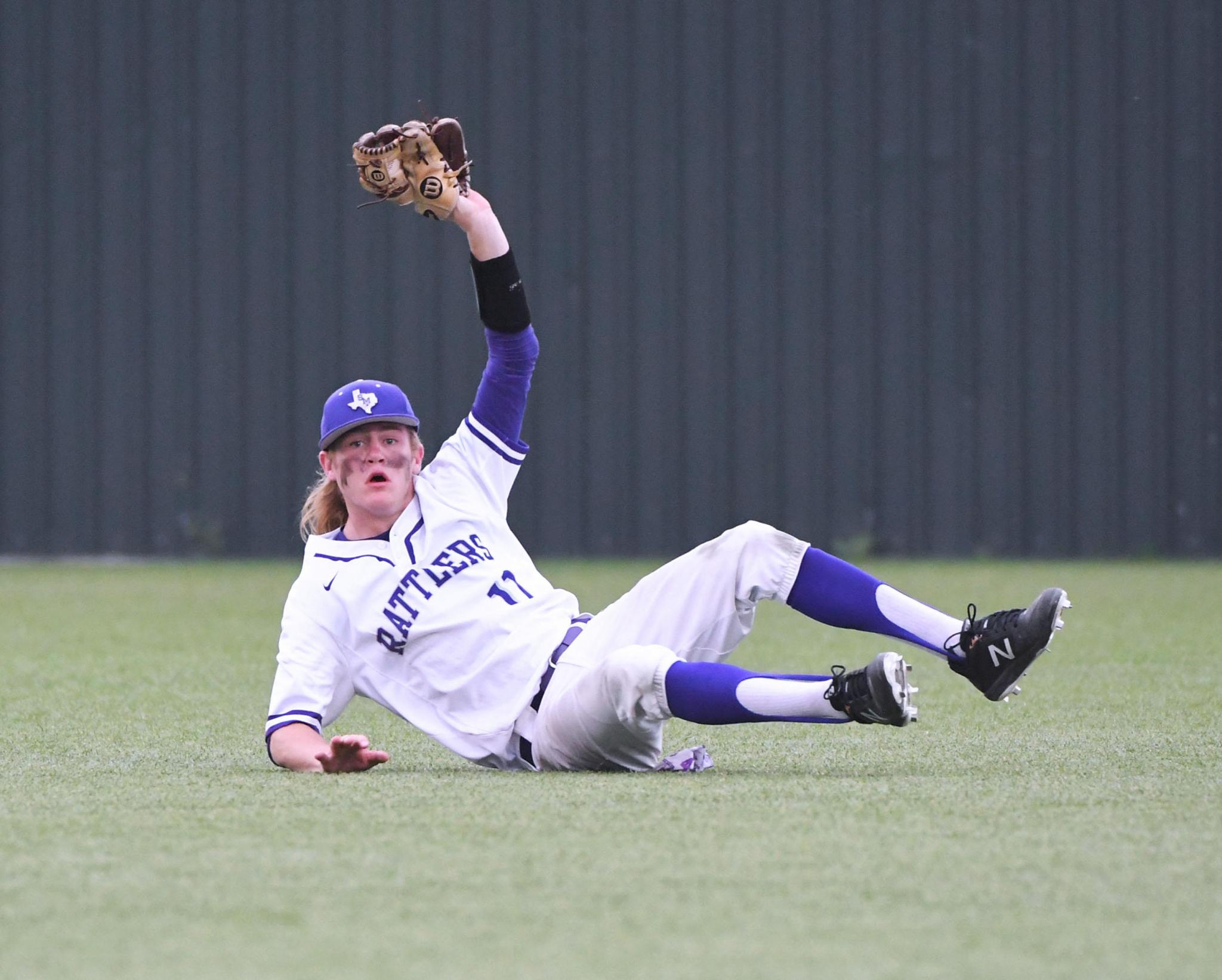 Coming into Tuesday night’s game, the Rattlers trailed school rival Buda Hays by two games in the District 26-6A standings, leaving the fate of their season in Hays’ hands. Two things would have had to happen in order for San Marcos to get into the postseason: Austin Bowie, the second place team in the district, had to sweep Hays in both games in their series. Meanwhile, San Marcos had to sweep Austin Akins on their end of things.

Head coach Bryan Webb spoke with his team about the scenarios of how the rest of the season could play out.

“That was something that we talked about yesterday,” Webb said. “It was a known fact that we put ourselves in a spot where somebody else controls our destiny and our faith and, you know, if it happens, it happens. If it doesn’t, we just gotta finish strong.”

And finish strong they did. San Marcos (21-8-2, 7-6 district), desperate for a win, started their ace freshman pitcher Reagan Chomel, who threw nine strikeouts in 6.0 innings of work, giving up only four hits to the Eagles offense with no walks. That kept Akins (3-17-1, 2-11) at bay. The purple and white scored two runs in the top of the first. Chomel wasn’t just pitching lights out, either. His two-run RBI in the bottom of the fifth extended the lead to 4-0 in favor of the Rattlers. They would go on to score one more run on a passed ball.

Akins wouldn’t give up. The final frame consisted of the Eagles getting two runners on base. Sophomore Gavin Gomez closed the game by forcing a groundout with runners in scoring position.

Cheers rang out as the team was half of the way to their postseason goal from their standpoint, but they knew they needed to check into what their I-35 rivals were doing against Bowie.

The mood changed immediately. Tears fell from eyes. Seniors walked to the home outfield one more time. Coaches stuttered trying to talk to their players. All because Hays had defeated the Bulldogs, 6-0, in the first game of its series, effectively ending San Marcos’ playoff hopes.

“It’s a sad deal, it made my chest hurt, it made my heart hurt looking at my son and all the young men that have grown up with him and been in my house and gone to school with him and seeing them in the halls” Webb said. “It’s a life lesson that when your time is called you gotta do it. Baseball teaches life, it teaches you how to handle situations and that’s what it’s all about. We want to win ball games, but we also want to make good young men and that’s what we’re producing out here.”

Webb described his team as “five hits away from being one of the best teams in the state of Texas.” Losing 17 seniors last season and dealing with youth learning curves, they’ve handled adversity all season. The team has eight losses on the year and seven of them are against top-13 teams in the state of Texas. He also thought it was a stepping stone to this team’s progress next season.

“Not going to the playoffs is not indicative of what this season was about. We turned it around,” Webb said. “We got it back on rolling again where we’re where we need to be again and the foundation has been built again. So we’re back and, you know, when I told the younger guys, ‘ingrain this feeling in your stomach right now and let’s not ever have this feeling again.’”

The win unfortunately marked the last time the seniors would play on their home field. Chomel said the connection between him and his senior catcher Selvin Anderson meant more than just the game. Before each inning they’d give each other a hug and go “shake and bake.”

“Everybody loves everybody,’’ Chomel said, struggling to speak as tears rolled down his cheeks. “First day I got here, everybody just loved me, especially Kannon (Webb) and Selvin. They both made it feel like home.”

San Marcos does have to finish its series against Akins on Friday at 5 p.m. Webb wanted the fans and the community to know he’s been proud to lead this team this season.

“Our fans are 100%. We travel well, we’ve got great crowds here. Our kids played extremely hard. I just want to say I love them, I love San Marcos,” Webb said. “I love everything about this program and what it represents, and I think we do a great job representing what San Marcos is about the blue collar, hard working environment community that we have and I’m proud to lead this program.”