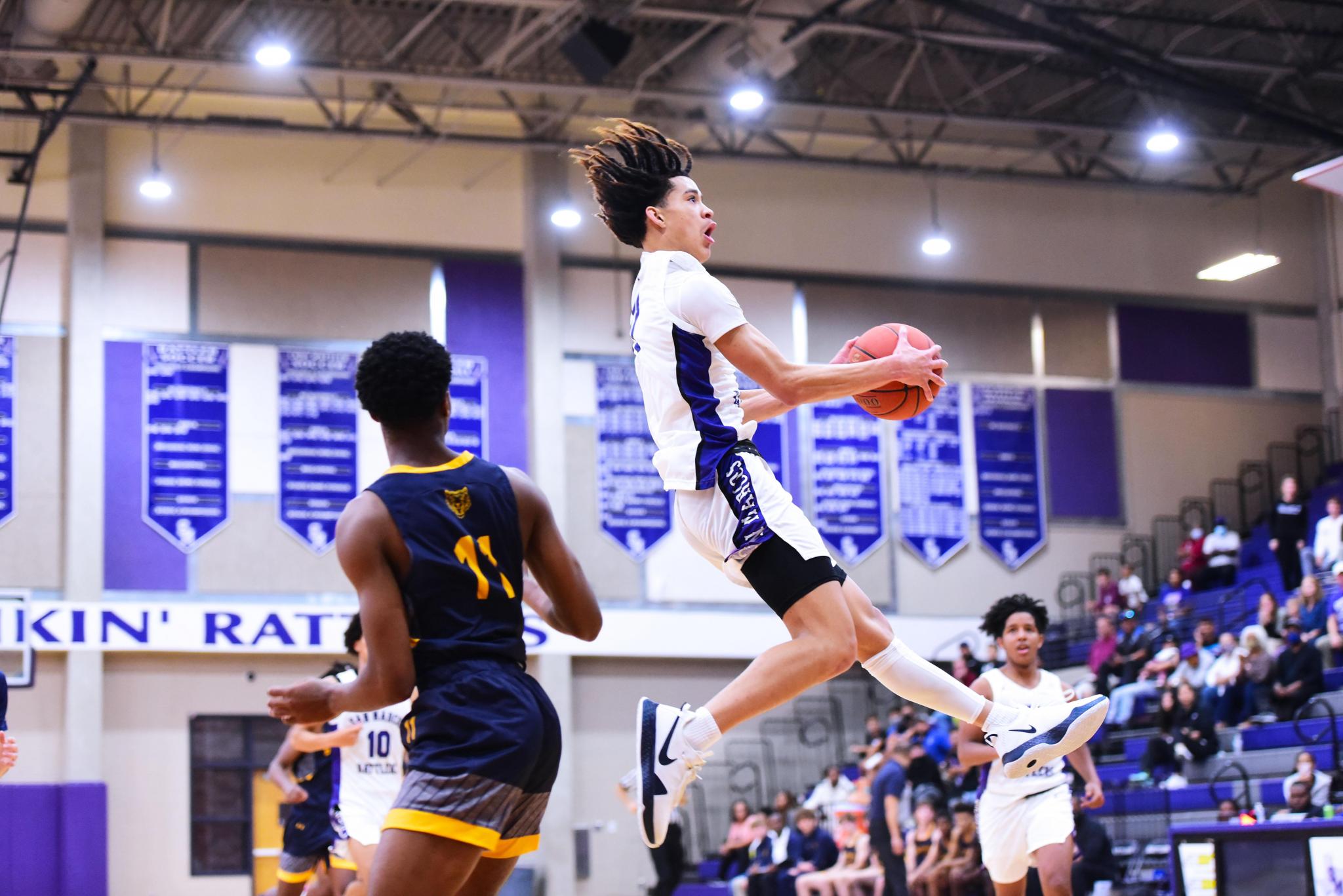 San Marcos first-year head coach Dan Miller told his leaders to get everyone together mentally.

High level intensity basketball took place in San Marcos’ 85-72 Snake Pit debut win over Round Rock Stony Point (2-2) Monday afternoon. Officials were critiqued out loud by fans, players were hit with technical fouls and both teams' fast-paced play style put them in the bonus with 4:07 left in the game.

There was one particular moment that stood out as the final minute closed — after Stony Point was penalized with a technical foul and emotions of the game began to show from both teams, Miller looked to junior forward Malik Presley to keep the team pushing down the stretch.

But in the team’s first visit to the Snake Pit, San Marcos (4-3) never relinquished the lead in the final half of play. The largest lead of the game came in the fourth quarter as the purple and white led by 15. The Tigers cut the hosts lead down to seven with 2:07 to play but late-game free throws and the experience of the invitational played a key role in the win.

“That's what we're really trying to teach with these guys is, to be champions, you gotta have championship players and winning plays from the start of the game, middle, and then finishing games,” Miller said. “What we were doing is kind of putting spurts together. We’re trying to get championship habits in everything we do, being on time, going hard in warmups, just some of the simple things. It's a great group of guys who are very together and we're just working on those habits. And you can see it, they didn't panic today. When the other team made some good plays, they just stayed with the plan and got it done today.”

Stony Point opened the game up in a 2-3 zone, which disrupted the San Marcos offense for a little bit in the first quarter — enough to score seven unanswered points after the Rattlers hit the first 3-pointer of the game. The visitors kept that zone look to build a 26-21 lead.

Three of junior guard Kaden Gumbs’ 25 points closed out a great three-minute stretch of basketball for San Marcos by doing what he’s known to do. Gumbs has already hit multiple buzzer-beaters this season including two in one game against Round Rock Westwood. He did it again, this time falling down with a hand in his face from beyond the arc to give San Marcos a 31-30 lead heading into halftime.

“It feels really good,” Gumbs said. “We know our roles on the team. We know we're gonna have to average about 20-plus between (myself and Presley), it's gonna help the team in the long run.”

Presley started to play-make for others as he dished out an assist to junior forward Mateus Perkins. He then hit his second triple from the top of the key. The pace of the game picked up dramatically. San Marcos’ 54 second-half points were because of stops.

“We really talked about guarding your yard better, guarding your guy and just getting down in a stance a little bit,” Miller explained. “(Stony Point) was getting to the rim too much and into the paint too much in the first half, and it wasn't necessarily just these great moves, it just we had bad closeouts and we were straight up in our stance. We're a fast team, we want to run, and to do that It's a lot easier when you get stops. And I thought we got more stops on the defensive end, which led to the offense.”

Even though they continued to trail, Stony Point did not give up in the fourth but San Marcos closed out an intense 85-72 win at home. Presley sees the differences in his team. The four-star forward feels like this year's team is special and with some new additional prices they have the right group to make a playoff push.

“We are a completely different team this year,” Presley said. “We got new players and we all got better, every single person on the team. We got some new additions like Jake Darling and Jaidyn Brown, who wasn't able to play last year because of the UIL transfer rules, but we got him back this year. It's just a different team and we came out with more energy than usual. And we got the dub.”

Presley finished with a game-high 30 points, closely followed by Gumbs’ 25. Perkins was a presence inside with seven points to go along with eight rebounds.

San Marcos clashes with Temple and San Antonio Central Catholic before returning home on Dec. 3 against Kerrville Tivy. Miller is optimistic about the team's ability to be good this season.

“It was cool to finally play against another team inside the Snake Pit,” Miller said. “I'm just proud of the guys and I love these guys. We have a lot of work to do but we can be a special team if we just stay the course.”