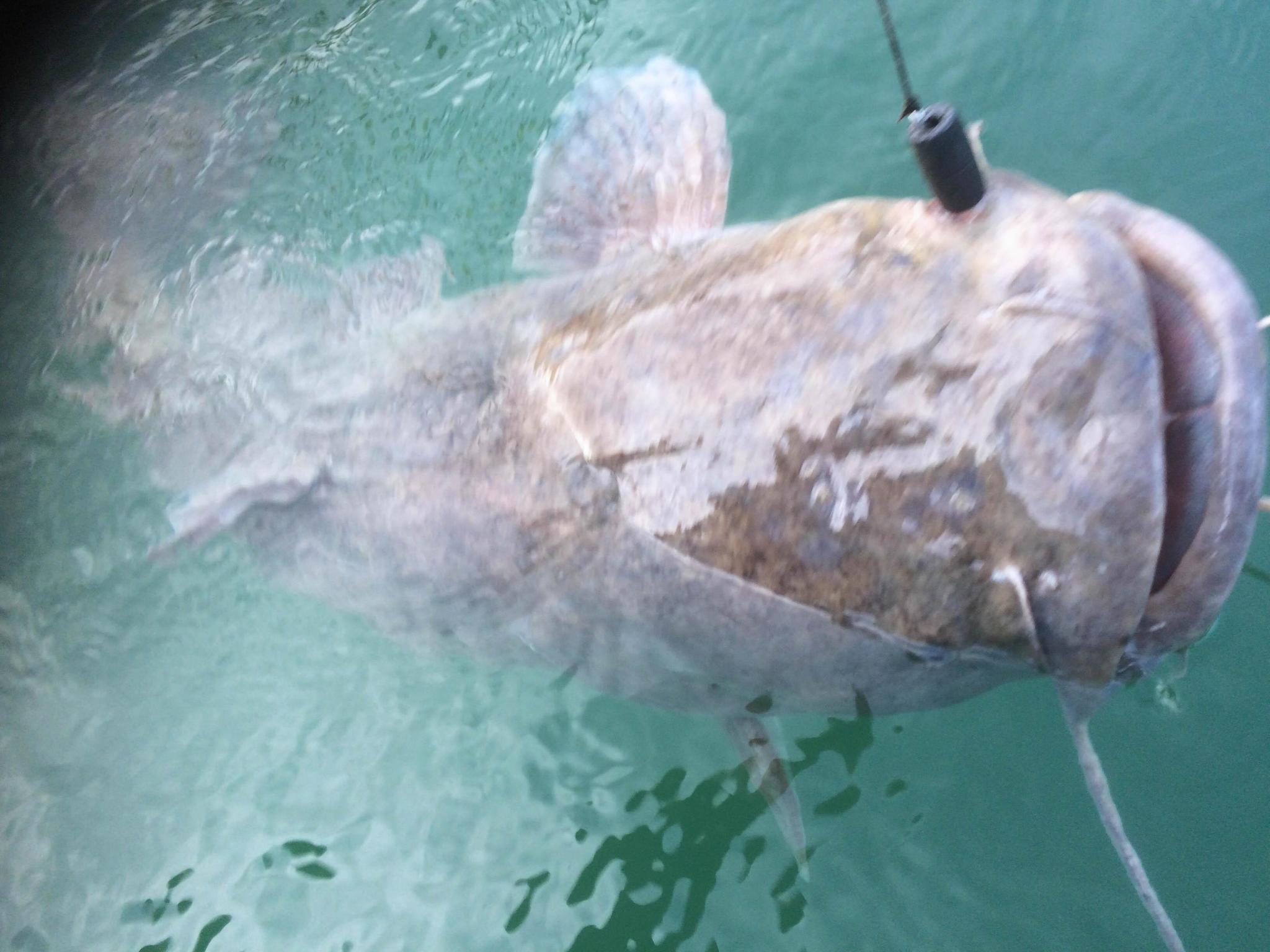 Finding a 38-pound catfish on the Guadalupe River

It was a beautiful day to be on the river. My neighbor, Tom Ray, and I were on the Guadalupe River about 6 miles above Canyon Lake. The white bass annual spring spawning run was overdue to start. But we love the river and decided to check it out. We caught a few white bass but other events overshadowed it.

A flock of about 35 Rio Grande turkeys were on the bank on the west side of the river. The toms were fanned out and strutting around the hens. They were not gobbling yet. That’s a few more days ahead as we move closer to the spring breeding season. As we idled on past them, the whole flock flew across the river. Tom was counting them like an accountant as they glided across. But even the turkeys were not the main event.

As we slow-trolled our crappie jigs upstream we saw a big limb on a dead tree shaking. Then a big fish tail appeared. Someone’s catfish limb line had a big catfish hooked. We pulled up to the tree and, to our amazement, a huge flathead catfish was swimming beneath the limb. A big hook was embedded in the corner of his mouth so we knew he was not going to escape. Tom eased the line up and I took photos as the fish slowly idled around.

The fish was huge. It was the largest flathead catfish that I had ever seen.

After pictures, we proceeded on upriver to one of our favorite areas. Soon a small boat could be heard coming up the river. The driver of the boat, who looked like an Arkansas hillbilly, began to check some catfish lines tied to another dead tree. The line had the same type of floats as the one we had seen earlier. We engaged the long-bearded catfisherman in conversation.

“We catch lots of catfish on this river,” he said. “Last year my friends and I caught over a thousand pounds.”

“Do you have a line about a mile downriver?” we asked.

“Yes, but I didn’t check it yet. I just headed upriver,” he replied.

“Well, that line has a flathead catfish over 30 pounds on it,” we exclaimed.

“I caught a 49 pounder several years ago,” he said.  “There are some big ones in the river. I’m going to go get my fish. Thanks for not stealing him.”

We later worked our way all the way upriver to the rapids. A pickup truck made its way down to the river’s edge.

“Catching any fish?” asked the driver.

“My friend who lives near here just caught a 38 pound flathead catfish,” he shouted.

“We saw that fish earlier and took pictures,” we said.

Flathead catfish are commonly called yellow cats or Opelousas cats. The flathead can grow very large, attaining weights of up to 100 pounds.

When I lived at home as a boy my Dad and I did lots of catfishing on the Sabine River. We had an old cypress leaky river boat with a 5 H.P. outboard. From that old boat we set limb lines and “trot” lines in the swift waters. We caught lots of blue catfish, channel catfish and some flatheads. Daddy called the flatheads, ops. They were our favorite.  Most of the mottled-colored ops that we caught were four to 12 pounders.  We never caught a huge one.

Flatheads (they get their name because their big heads are flat) prefer live baits. Live perch, small carp and big shad are all great baits for the yellow cats. The man we talked to on the Guadalupe was using live perch for bait.

Dad and I caught lots of blue cats on the Sabine. They were beautiful silver-bluish colored catfish. A nice 8 pound blue cat would be very thick from the dorsal fin to the belly. Dad called them “humpback blues.” Blue cats can also grow very large also, occasionally reaching 100 pounds.

Blue cats also like live bait but we often baited with big live minnows that we ran on the hook like a worm. The blues loved those fresh, dead minnows.

Many catfish - flatheads, blues and channel cats – are caught on “setlines” – limb lines, drop lines and trot lines – but many are caught on rod and reels by patient fishermen. I don’t have the patience to wait for a catfish to hit a bait. I have to keep moving and casting constantly for bass.

Occasionally, a catfish will hit a bass fisherman’s lure. I have caught some channel cats on deep crank baits and spinner baits.

Years ago my young son, Terry, caught a 20 pound flathead on a plastic worm. While Tom and I were taking pictures of the big 38 pound flathead, Bobby Whitehead and his fishing partner, Carl Adkins, were fishing on Decker Lake near Austin.  Carl hooked something big on his soft plastic bait. It sure wasn’t a bass.  Soon they lifted a 10 pound flathead into the boat.

You never know what you may catch if you just keep your hook in the water.