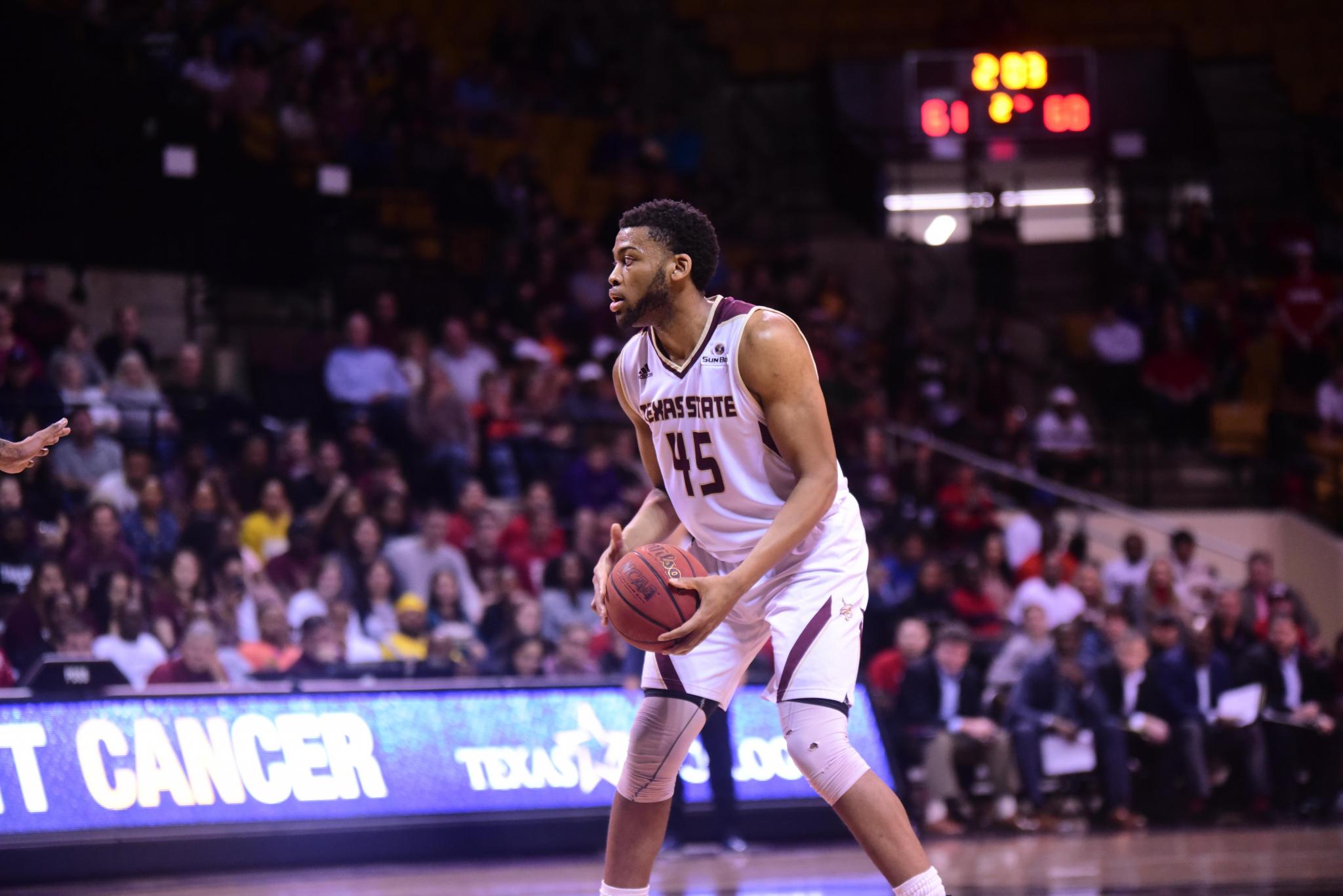 The ball found Eric Terry inside the paint with 11 seconds left and Texas State clinging to a one-point lead over Coastal Carolina on Jan. 11.

Terry rose up, bent his elbow, flicked his wrist and got the floater to go. The 6-foot-8 redshirt junior forward possesses a filthy hook shot and against the Chanticleers, it was just what the Bobcats needed to secure a 65-61 win.

“He’s been something like a glue guy,” junior guard Nijal Pearson said. “He takes charges. He rebounds. He finishes around the rim. That jump shot, jump hook is about as sweet as ever. He bails us out a lot of times with that jump hook. If we look for offense down there, he gives us an easy bucket.”

Senior forward Alex Peacock believes the Bobcats are almost guaranteed a win when Terry is playing well. Terry has increased his production this season with 8.9 points and 3.7 rebounds per game.

But becoming the presence inside the paint he is now took reshaping his body, making a drastic dietary change and adding a little more edge to his game.

“I started to be abnormally tall”

Terry began to get a better understanding of basketball in sixth grade.

He claims he was a chubby kid and didn’t think he’d be as tall as he is now when he was in middle school.

The post didn’t start dedicating himself to the game until middle school athletics began in the seventh grade.

He thanks his dad, Eric Sr., for helping him find his love for basketball.

“Even though (my dad) didn’t play basketball, he didn’t force me to play it. That right there helped me to love it more because I saw it as fun,” Terry said. “When you see something that’s fun, you want to keep doing it. So, I think my dad really taught me to really do what I want to do, what’s going to make me love and have fun with it.”

Terry finally hit his growth spurt the summer between eighth and ninth grade. He quickly stretched to 6-foot-5.

“I started to be abnormally tall,” Terry said. “I was kind of like quirky. I had big feet, big hands. I was trying to learn how to be that tall.”

Terry found himself a spot on the junior varsity team at Mayde Creek High School in Katy his freshman year. He played well on JV and was made a starter on the varsity squad the next season as the only sophomore on the team.

He only played three games his junior year before a concussion sidelined him for the rest of the season. Terry decided to transfer to Westside High School in Houston but due to University Interscholastic League transfer rules, he was forced to sit out his senior season.

Terry knew he still wanted to play basketball, so he went the junior college route and attended Temple College.

“I had a lot of setbacks (in high school) so I felt like going to a junior college would really help me mask those setbacks,” Terry said. “It really did help.”

Terry played one season with the Leopards, where he started in 30 games and averaged 8.7 points, 4.7 rebounds and 1.4 blocks per game. The Houston native called the JUCO experience humbling.

“I feel like no kid wants to go the junior college route because they feel like they’re (Division I) or nothing,” Terry said. “And so, they would never think of going junior college because that’s basically going back to high school. So, with that, it kind of humbled me because I was like the same person that everybody else was. I was the D1 or nothing.

“It really brought me back to my basics, back to my fundamentals. It really helped me learn the love of basketball again because I sat out my senior and junior years (in high school) so it really got me to the love of the game.”

Terry took an unofficial visit to Texas State and knew he’d like to be a Bobcat. He thought San Marcos and the river were beautiful. Terry also believed he could be a part of a change on the court.

“I didn’t really know much about the culture (at Texas State) but I knew it was bad,” Terry said. “I felt like it could change and I felt like I could be the change, and I feel like I’m a part of that change right now.”

Texas State coaches say Terry was doughy when he arrived in San Marcos in the summer of 2016.

He entered the program at 255 pounds. He and the coaching staff knew he had to become quicker and lose weight, so he redshirted his first season.

Terry spent extra time working out and became a pescatarian to lose the weight.

“I felt like pescatarian was the best for me because I like seafood a lot,” Terry said. “My mom is from Louisiana and so they eat a lot of crawfish, seafood, shrimp, all of that. You know, beef and chicken wasn’t really getting to me for the fact that it wasn’t as tasteful. So, I just felt like fish was the best route and so I felt like pescatarian (diet) helped me transform my body into what it is right now.”

The Houston native came into his second season at Texas State weighing in at 230 pounds.

Terry played in all 33 games during his redshirt sophomore campaign. He amassed 5.8 points and 2.7 rebounds in 15.7 minutes played per game.

“I was back to playing on a higher level,” Terry said. “It taught me how to play defense better because at that level everybody is good. Everybody is good, it’s not like the JUCO level, it’s not just one person, all five on the court are really good.”

Kaspar often refers to him as “A Gentle Ben,” a nod to the 1965 children’s novel by Walt Morey, where Ben, a brown bear, and a teenager named Mark become friends.

Terry gets his natural gentleness from the way he was brought up.

“I was raised to respect my elders and be considerate unto others,” Terry said. “But coach Kaspar really taught me that when you’re in between the lines you should be the meanest person on the court. I really took that to heart. I really dwelled on that.”

Kaspar believes Terry has gotten a little meaner on the court but there’s still room to grow out of his gentle ways.

“He’s a little more assertive but not as much as we’d like,” Kaspar said. “But he is who he is. I think you could yell at him until the cows come home and he wouldn’t change. He’s a gentle spirit. Like I told him, ‘I just need you to understand what you’ve got to be on the court. You don’t have to be a mean dude, a jackass. Just play like you want to win.’ He’s gotten better.”

Terry also likes to cook. “I want to be a chef one day. I want to own my own restaurant,” he said.

Away from the game, Peacock calls his teammate a funny guy.

“He’ll say funny stuff but it’ll be under his breath and some people don’t catch it,” Peacock said. “But I tend to catch it a lot. ET’s a funny dude.”

With Terry’s improvement this season, his teammates have taken notice. They know how important he’s been in this year’s successful season.

Terry may be a quiet person but he wants to do everything he can to help his team.

“I’m on the starting five on a really good team and not a lot of people can say that, so it’s really a role that I got to step up because even the players on the bench that we go to, I feel like I really got to be a leader on the court and off the court,” Terry said. “And even set the example because I don’t really talk a lot so I feel like I set the example and that’s starts with me on the court.”

Terry wants to show that he’s confidently growing in his role as an inside force.

“When you have confidence, you feel like you can climb to the moon,” Terry said. “It’s really just confidence. (The coaches) told me that nobody can stop you, nobody can do this and that if you just believe in yourself.”