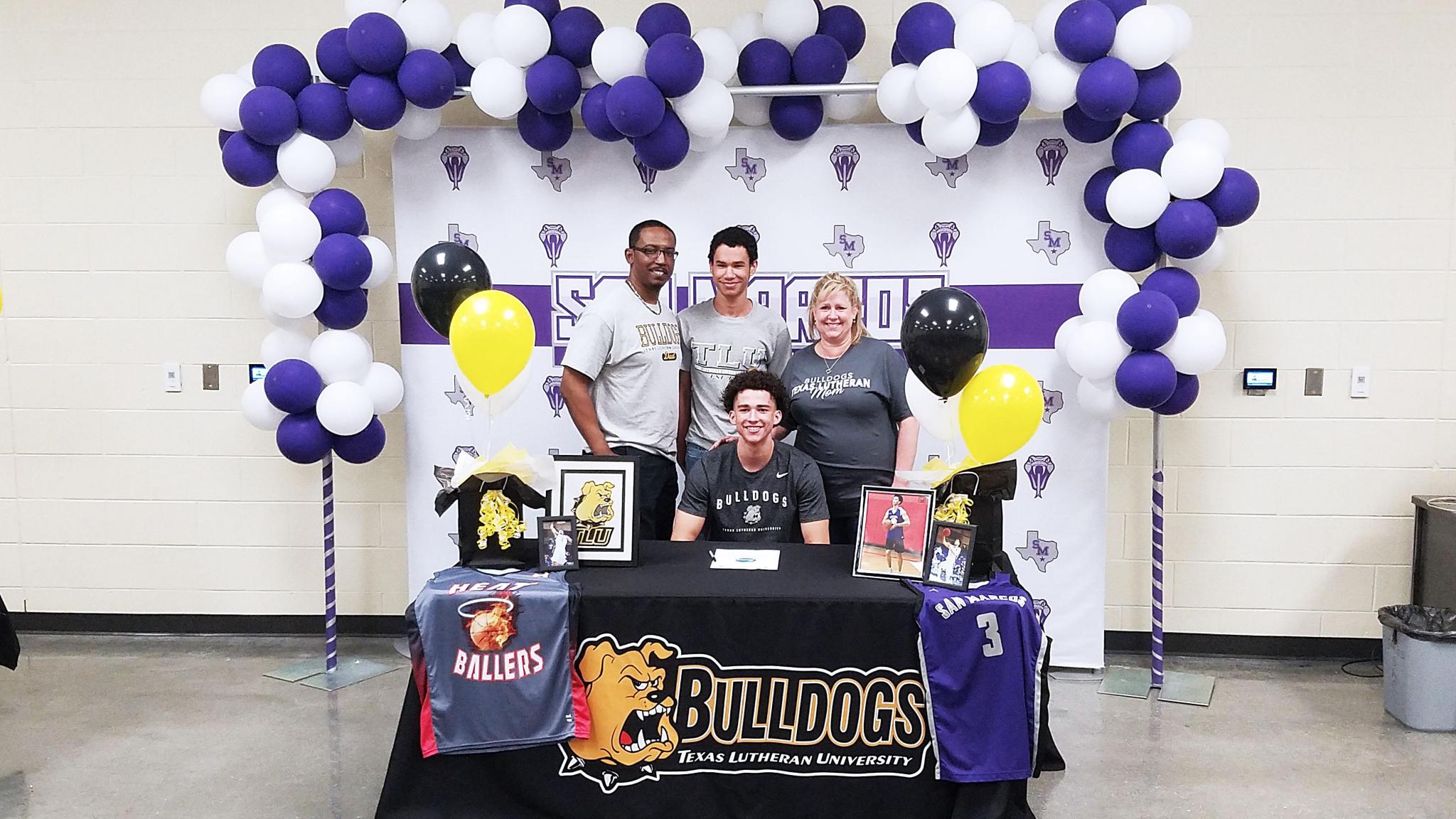 Green's ‘breakout’ year leads to letter of intent with Bulldogs

Mason Green has always had a ball in his hands.

When he was younger, his dad would spend his entire afternoon watching NFL games. But Mason wanted to play ball. To compromise, Green’s father would play catch with his son from his living room chair “for hours.”

Eventually, Green started playing more and more with an orange ball. He liked to hoop.

Now, Green gets to hold the ball in his hands for a while longer. On Friday, the senior signed a letter of intent to join the Texas Lutheran Bulldogs.

“I just always had a love for basketball,” Green said. “When I don’t do basketball, life is just weird. Basketball’s just a part of my life. I feel like anything I do, I have to be playing basketball at the same time. And so, when I was younger, I just knew I wanted to play basketball just as long as I could. It’s still that way.”

When San Marcos head coach Thomas Acker saw Green for the first time during the student’s sophomore year, he was surprised by Green’s skills on the court. He could envision the player someday bulldozing opponents to get to the rim and stopping them in their tracks on defense. Or at least, until he saw Green in the weight room.

At 6-feet and 150 pounds at the time, Green chose a pair of 15-pound dumbbells and to press overhead for the workout. Acker was unimpressed. But he knew if Green committed to transforming his body, he would be a nightmare for other teams to handle.

“(I liked) just his stature, first of all. Just the physicalness, he had a frame that would get bigger if he put the work in,” Acker said. “But he was a skilled player. He could get to the rack. He was an OK shooter then. He’s worked very hard on his shooting now, he’s much more of a consistent shooter now. You just see flashes. But that was his sophomore year, so he’s a young pup then.”

Both coach and player agreed, Green saved his best season for last. The senior became a gym rat and entered this year standing at 6-foot-4 and much closer to 200 pounds than 150. He was more powerful than ever.

Acker noted that Green — typically quiet and introverted — had a new demeanor.

It came in handy during the season. Unfortunately, there weren’t many other players on the Rattlers’ roster with his size. Green has a natural skill set to play on the wing. But because he was the biggest player on his team, Acker often had to shoehorn him into the post, usually pitting Green against the other team’s biggest player.

San Marcos finished the season at 10-24, missing the playoffs. But the two-year letterman still racked up a handful of accolades. He was voted to the 26-6A All-District second team, earned academic All-District honors for the second year in a row, was selected for the Chicken Express All-Star Classic and chosen by his teammates as the Rattlers’ MVP and Defensive Player of the Year.

Green knows he still has a long way to go to become a successful college student-athlete. He plans on majoring in education to potentially become a basketball coach, like Acker. He’ll have an opportunity to play more on the perimeter, though the coaches at TLU have told him they like that he has experience in the post.

He also knows he has the support to help him reach his potential. He’ll only be a 30-minute drive from home, allowing his family and friends to keep coming to his games.

“It felt like a little town. It felt like a real good place to be for me,” Green said. “It’s been a goal my whole life to get to the highest level that I could. And I still think I can get higher than this. But as of right now, I’m just gonna grow from this.”

Acker thinks Green's best basketball is yet to come.

“He’s been a great beacon for our entire Rattler nation, for our school. He’s done it the right way. He’s represented us, this school and this program the right way and I couldn’t be prouder.”