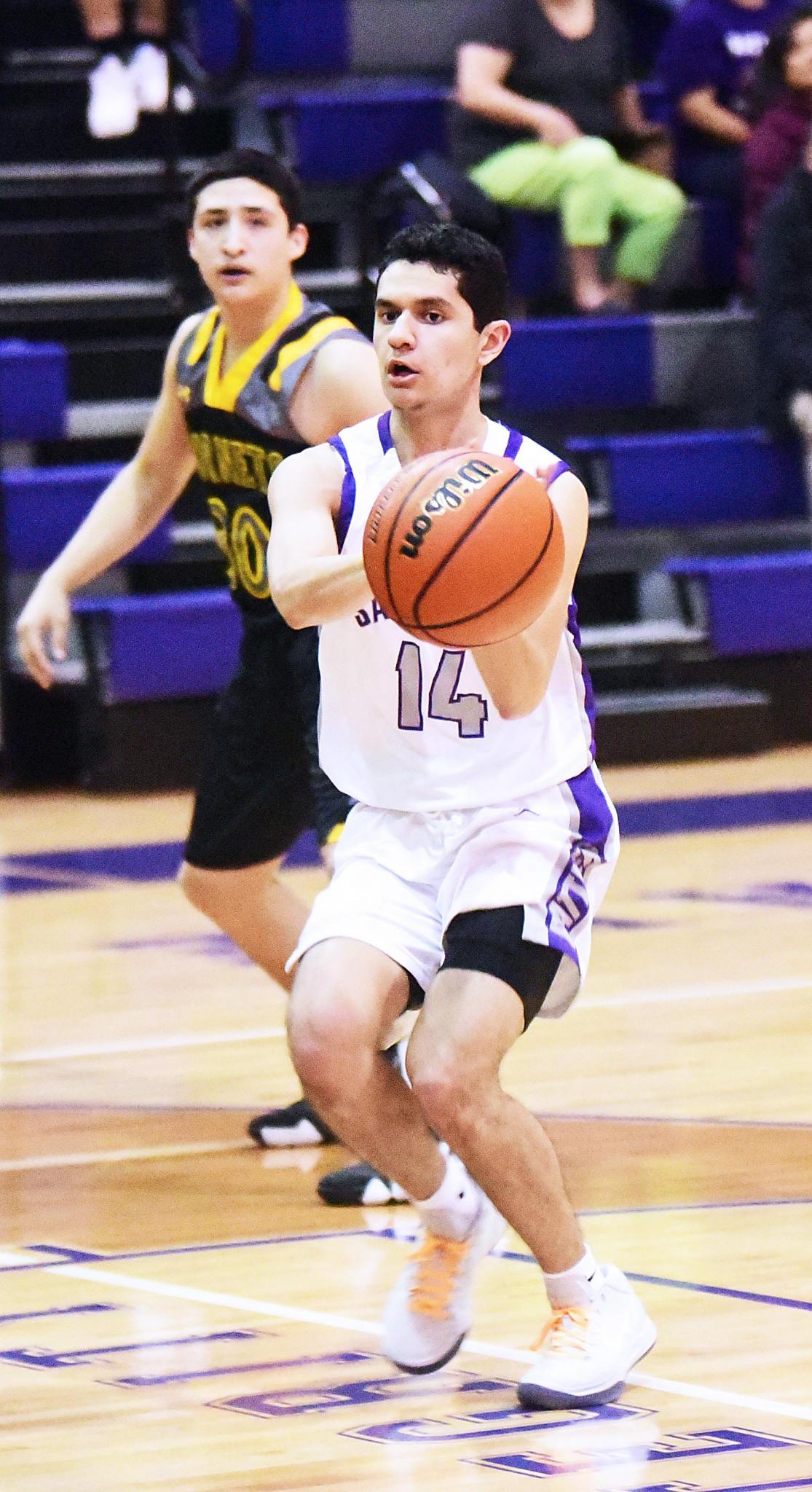 NEW BRAUNFELS — The Rattlers have a knack for hitting buzzer beaters.

Senior guard Pablo Rios IV clinched the team’s first win on Dec. 1, 2018 with a half-court prayer, beating Kingwood Park 38-36 in the Cedar Creek Tournament. Junior wing Josh Deleon canned a triple from the left corner on Jan. 15 to earn a 59-56 victory on the road against Smithson Valley, San Marcos’ first district win. And in their final game of the season, the Rattlers got one last shot off.

Junior guard Joey Hernandez sank a 3-pointer from the right wing, leaving just half a second left on the clock and San Marcos up, 61-58, at New Braunfels Canyon on Tuesday. The visitors hung on to seal their 10th victory of the year.

Rattlers win their final game of the season defeating Canyon on a buzzer beater 3!!! The Coaching staff couldn’t be prouder of this team’s resiliency.

And, a big shout out to our seniors who ended their Rattler BBall career tonight with a DUB!!#RattlerPrideNeverDies🐍 pic.twitter.com/GK9RECIFEL

“Our main goal was coming in here, getting the W, finishing off the season strong,” Hernandez said. “So, for our seniors, who have done an incredible job all season long, it was really about making it something memorable for them.”

Head coach Thomas Acker said his team did a solid job of executing its offense all night long, but that his players struggled to make their shots in the opening half. It cost the Rattlers, as they found themselves down 29-19 at the end of the second quarter.

The Cougars grew the lead to 13 points, the largest of the game, twice in the third quarter. But San Marcos kept fighting back. The team went on a 10-0 run in the last two minutes of the period, cutting its deficit to just one point, down 40-39.

“We were more motivated knowing that it was our last game for us seniors,” senior forward Mason Green said. “I feel like as a team, we came out and we had the hot hand. And I feel like we rode that momentum into the fourth quarter and we hit some clutch shots that led to more momentum on our side.”

Senior wing Taylor Dickerson poked the ball away on Canyon’s first possession of the fourth and cashed in for a fastbreak layup on the other end to give the visitors their first lead of the game since the 4:42 mark in the first quarter. Neither team gave an inch, though, as the lead changed another 10 times.

With 33 seconds left, Dickerson found Deleon in the left corner on a fastbreak, who knocked down the trey and pushed San Marcos back ahead, leading 58-57. But the Cougars were fouled on the other end and tied the game up with a free throw.

The Rattlers slowed down to hold the last possession of the game. Deleon dribbled the ball high above the arc on the right side of the court. Green set a screen, but Deleon only got as far as the top of the key before the defense caught back up.

Green set another screen another screen and Deleon darted into the paint. Canyon’s defense crashed all around him. As the junior approached the rim, he noticed Hernandez wide open on the perimeter and lasered the ball out to the guard. Hernandez nailed the shot.

“All credit to Josh, man. What an incredible find,” Hernandez said. “I practice that shot a lot, just waiting for the big moment. So, when my name’s called, I’m ready.”

The Cougars full-court heave was off the mark, and the visitors took the 61-58 win.

San Marcos finished the season going 3-11 in district and 10-24 overall. Seniors Dickerson, Green, Rios, Gabe Sanchez, Gambitt Soto and Devin Tovar will all move on after this season, but the team will retain seven juniors from this year’s roster.

“We had a lot of adversity. And we didn’t have a good record this year,” Rios said. “But the main thing is we all stuck together and no one broke down each other and we just kept fighting through.”

Acker is looking forward to taking a little bit of time off and then get back to work in spring training. But he’ll miss the resiliency this team display all season.

“I’m sure they’ll look back on it with fond memories with this, “Acker said. “(I’ll remember them for) their camaraderie. They’re a pretty tight group.”