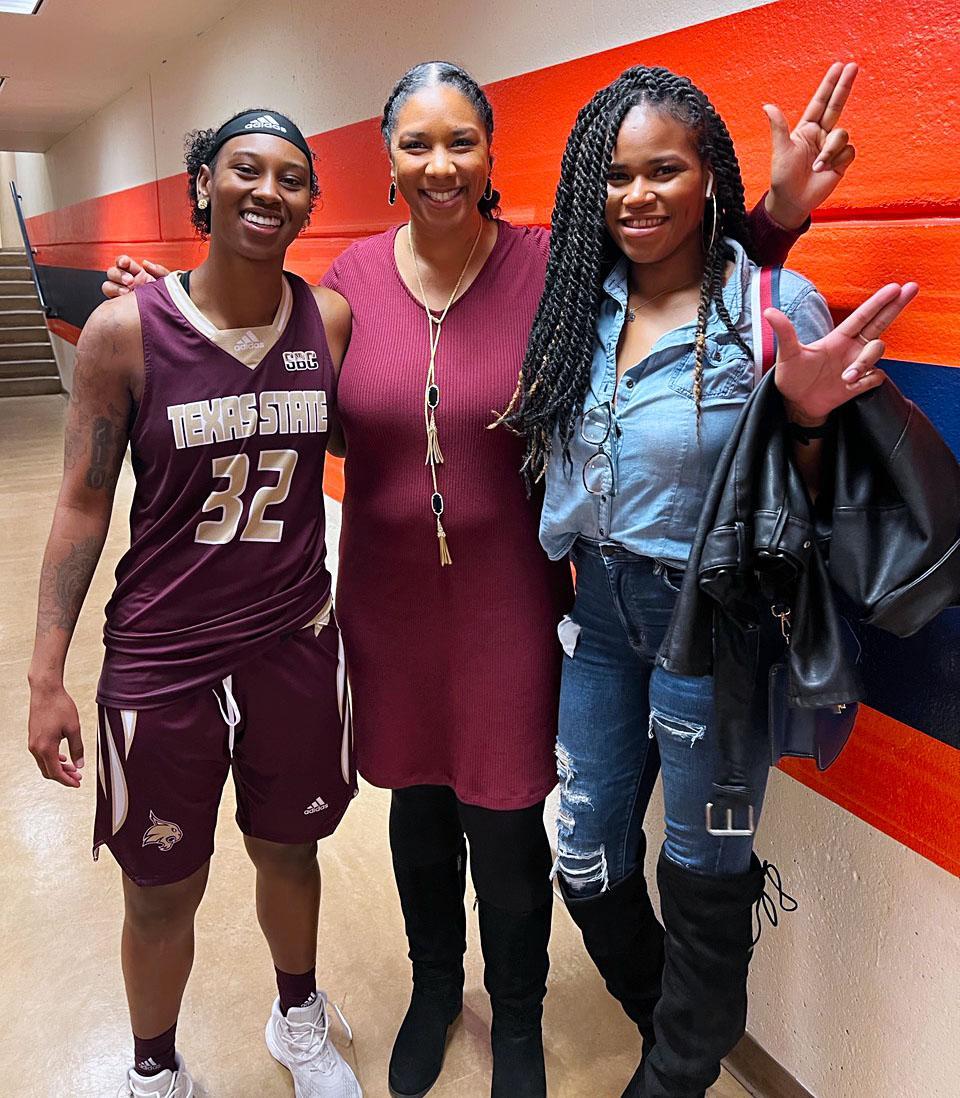 SAN ANTONIO — Zenarae Antoine was excited to take a picture with two of her 1,000-point scorers.

One told the Texas State head coach she was coming before the Bobcats’ game at UTSA on Thursday. Former forward Erin Peoples (2012-17), who scored 1,122 points in her career, watched from the stands as the maroon and gold took a 76-62 win over the Roadrunners.

The other had to earn her way into the frame. Before Thursday’s contest tipped off, Da’Nasia Hood had 988 career points, 12 shy from becoming the 20th player in program history to reach quadruple digits.

The senior forward who spent her high school career 25 miles away at San Antonio Wagner finished the night scoring 14 at the UTSA Convocation Center in front of her hometown crowd.

“It meant a lot, especially being from San Antonio. Getting to play in front of a lot of family, it meant a lot,” Hood said. “It wasn't my best game but I'm still glad that we were able to come out with the W.”

“I was just really happy,” Antoine said. “For me, I'm happy because she is here at home, in front of her home crowd. And then the cherry for me was having Erin Peoples also here in the stands, she was a phenomenal player for us as well. To watch another player kind of pass the torch in that scoring category is just really fun and exciting.”

Hood was one of four Bobcats to post double-digit points on the night. Both teams played at a frenetic pace, unafraid to pull up early in the shot clock. Texas State found its range almost immediately, sinking five 3-pointers on 10 attempts in the first quarter and establishing a 23-18 lead.

The Roadrunners erased it at the start of the second, hitting a triple and a mid-range jumper to tie things up. But the visitors countered with a 12-0 run, all of the team’s points coming from Hood and senior point guard Kennedy Taylor.

“It's just the will of the players, honestly, just understanding what we needed from them on the offensive end, the patience that we needed,” Antoine said. “And then defensively, finding ways to get stops. And I really put that all back on our players' ability to just grow and mature. And I love that, I love that about this team, I love this team.”

The Bobcats held the hosts at arm's length for the rest of the quarter, heading into halftime up 45-37. But UTSA mounted a second comeback attempt, holding the maroon and gold to one point in the first 4:28 of the third quarter and scoring six points to trim the deficit to three.

Texas State hit the gas again. Taylor knifed her way into the paint for a layup, then hit senior guard Ja’Kayla Bowie with a pass in the corner on the next possesion for a 3 to extend the lead back to a safe distance. The team kept coming, forcing turnovers and feeding redshirt junior forward Lauryn Thompson in the post to make it another 12-0 run.

“We just were remembering our game plan,” Taylor said. “We just kept giving each other positive reminders of what we needed to do and then we went out there and executed.”

The Bobcats finished the third quarter leading 60-48, then stayed in front the rest of the way to take the 76-62 win. Taylor led the team with 15 points, followed by Hood with 14, Bowie with 13 and Thompson with 12. The team forced 30 turnovers, including a career-high-tying six steals from Taylor.

The Bobcats will take on their second Big 12 opponent of the season on Monday, tipping off with Texas Tech on the road at 7 p.m. They’ll be coming off the satisfaction of defeating their I-35 rivals for the fourth consecutive time.

“I'll be honest, anytime you have the I-35 rivalry, where you’re able to come into UTSA's house and get a win, regardless of what the score is, all records out the door — it feels pretty damn good,” Antoine said.