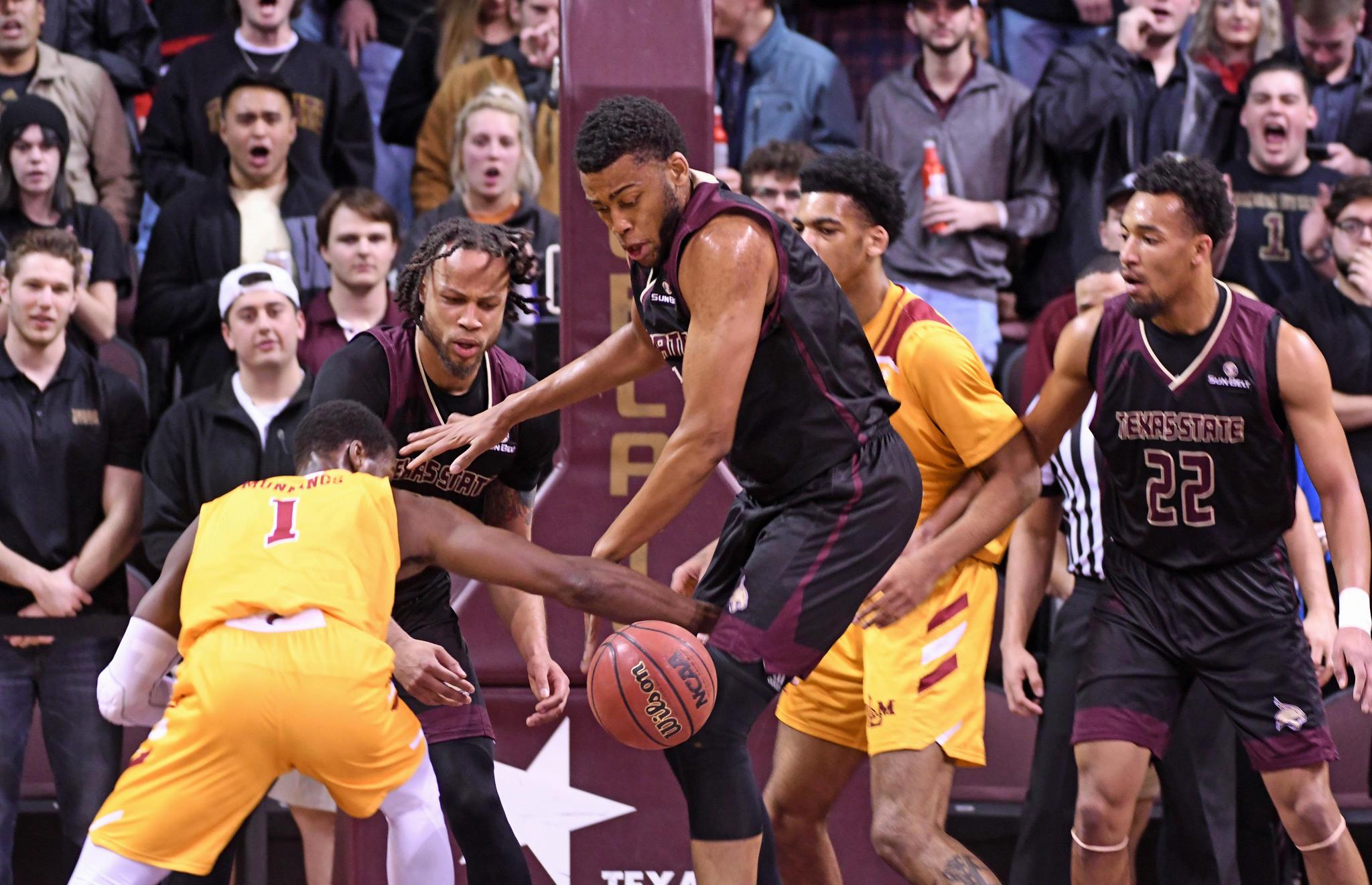 Despite falling behind by 14 against Louisiana-Monroe, the Bobcats had two chances at tying the game in the final seconds.

With under four seconds remaining, senior guard Tre Nottingham put up a 3-point shot but it was rejected by Warhawk senior guard Daishon Smith. Nottingham, however, came up with the rebound, collected the ball and heaved another game-tying attempt. But the ball sailed wide left as the buzzer sounded.

“I misread the clock. I felt like when I caught the ball, the space between me and my defender was a lot more than I thought it was,” Nottingham said. “(Smith) made a great play. He read my move. I was going up for the shot, he read it, he blocked it and he just played good defense.”

The Bobcat offense had trouble finding its rhythm Thursday night in front of 4,342 fans draped in black for their “Blackout Night” inside Strahan Arena. But Texas State found junior forward Eric Terry inside early and often. He racked up 11 quick points. Terry finished with 19 points and 10 rebounds

“Just posting up hard and just positioning, if I get angles and positioning that’s easy buckets right there,” Terry said of his double-double performance. “(ULM’s) post-man isn’t really a true 5-man, so the coaches told me to take advantage of that and so I did.”

The Warhawks adjusted after Terry’s early rampage and made life difficult inside the paint for the Bobcats.

ULM's defense packed the lane and gave Texas State wide open looks beyond the arc. But the Bobcats couldn’t take advantage, finishing the night with a 21.4 shooting percentage from 3.

“This was not just a bad shooting night, it was a horrendous shooting night on our home court in front of another good crowd,” Kaspar said.

Texas State got off to a slow start Thursday, falling behind 6-0. But junior guard Nijal Pearson capped off a quick 8-0 run to give the Bobcats an 8-6 lead.

Both teams traded points midway through the first period. But ULM seized control when junior forward Andre Washington put the Warhawks on top, 27-26, with over three minutes left in the half.

ULM extended its lead out to as large as 10 points in the opening period. But Texas State cut the deficit to 36-28 at the intermission.

The Bobcats quickly brought the Warhawk advantage down to four points in the second half after Terry converted a layup. Texas State kept things close early in the final period.

But ULM saw itself with a 54-40 advantage after senior forward Travis Munnings sank back-to-back 3-pointers.

Texas State cut the Warhawk lead to single-digits with a 3-pointer from Nottingham with 5:44 remaining in the half. Pearson sliced the deficit to 61-55 and a Nottingham 3 got the Bobcats to within five.

Terry’s final bucket of the game gave the Bobcats hope, lowering the deficit to 63-60.

Texas State’s defense came up with a stop with 12 seconds left but the Bobcats couldn’t complete the comeback.

The loss drops Texas State back into a tie with Georgia State for first in the Sun Belt.

Nottingham led the Bobcats with 22 points followed by Terry’s 19-point effort. No other Texas State player finished in double digits. Pearson — the team’s leading scorer — was limited to nine points and four rebounds on Thursday.

“It was very difficult (shooting),” Nottingham said. “Obviously, Nijal (Pearson) being our leading scorer, couldn’t buy a shot tonight. We know what he’s capable of. We know what he brings to the table. So, we’re not going to stress too much on his performance tonight. We know he’s going to come to play when it’s time to play. It’s just Monroe played harder tonight. They were the better team. We didn’t match their energy.”

Texas State has another difficult task in front of it. The Bobcats take on Louisiana (16-10, 7-6) during senior day on Saturday at 4 p.m. The Ragin’ Cajuns hold a 12-1 all-time record over Texas State but the Bobcats know they have to play harder against Louisiana than they did Thursday.

“We didn’t make shots tonight,” Nottingham said. “We understand we can beat (Louisiana). On any given night, if we make shots, keep playing hard on defense, we can beat anybody in the country. Tonight, it was just strictly missed shots … We just got to keep our heads high and let this game go. We’re going to be fine."