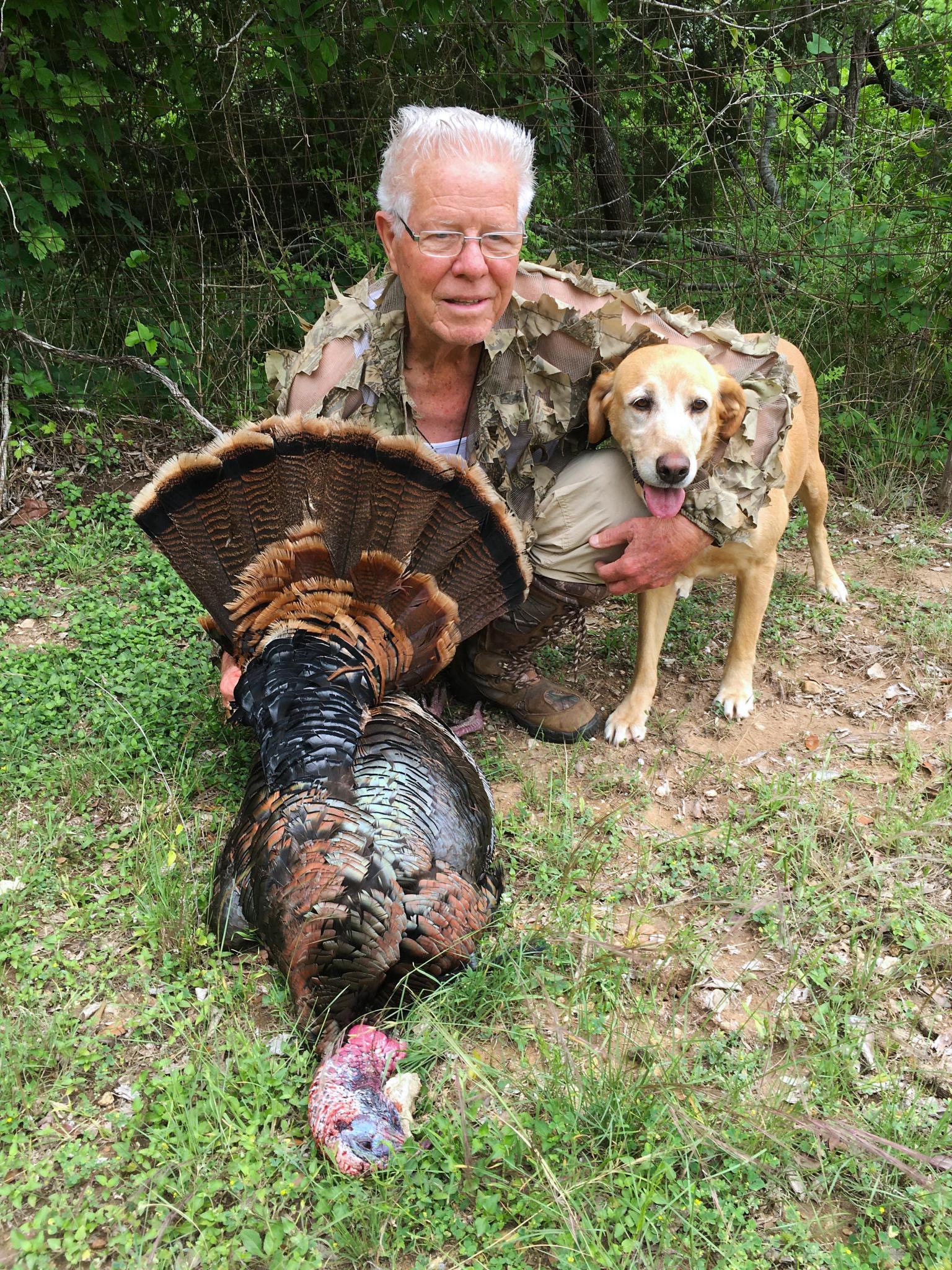 Hunting gobblers near Panna Maria during a challenging season

It has been a different kind of spring gobbler season for me. One ranch that I hunt near the Blanco River, which usually is crawling with turkeys, produced zero. I never saw a bird crossing the dirt ranch roads. I never heard a gobbler. Maybe the big freeze killed them. Or, the ranch hands have cleared much brush on the ranch. But there is still plenty of hiding cover.

On opening day, March 20, I hunted my lease near Panna Maria on Cibolo Creek. As I parked my truck in the dark I could hear two gobblers sounding off very near on the creek. I thought “This will be a slam dunk.” But it was not to be. They never answered my call and flew off to roost in the opposite direction.

Two days later I made a late afternoon hunt. I sat down by my corn feeder and began to call. In less than an hour, five young jakes (first-year gobblers) came out of the brush. I don’t know if they were coming to the call or the corn — probably the corn. I was not well hidden. They saw me pull my camo face mask down. I knew I had to shoot quickly. I picked out the biggest jake and pulled the trigger on the Browning A-5. He collapsed.

About two weeks later I was driving into the lease when a jake ran across the county road. I watched him travel across a field and into some heavy brush. I drove down the ranch road, thinking I might spot him. I did. His red and white head stood out like a stop sign.

Then, to my surprise, he began to move toward my truck. I jumped out, loaded the 12 gauge and slipped behind a tree. That jake wasn’t very smart. He traveled at a 45-degree angle toward the dirt road. He passed my tree at about 35 yards. Another turkey in the freezer.

But the real fun of spring turkey season is in calling a gobbler to you, within shotgun range. Actually, calling gobblers is opposite to nature. He gobbles to bring hens to him. We call, sounding like a hen, to bring him to us. I had two turkeys in the freezer, but I wanted to call one to me.

With only five days left in the season, I went back to Panna Maria. I couldn’t get Mike Mosel or any of my other hunting buddies to go with me. By yourself, it’s a long, dark, lonely drive to Panna Maria. So I decided to take my duck-retrieving yellow labrador, Annie, with me. She’s good company. But on a turkey hunt? Probably not a good idea.

Years before, on the same Cibolo Creek Ranch, I was hunting doves. My yellow lab, Lady, was retrieving for me. Suddenly, I saw a flock of about 30 turkeys coming down the creek bottom toward me. The fall turkey season was open so I tried to hold Lady still. No luck. She broke free and scattered those turkeys to the four winds. But it turned out OK. One big bird flew right toward me. I only had my little 20 gauge shotgun loaded with a No. 8 dove shot. But the turkey flew straight over me at only about 20 yards high. I counted about 40 little holes in him after he hit the ground.

Maybe Annie would behave better than Lady. I built a little blind with some camo netting. Annie and I climbed in for possibly a long wait. I clipped her leash on a stake and she laid down like a good girl. I heard a gobbler far down the creek, probably a half mile away. Then just little birds chirping were all that broke the silence.

I got real sleepy so I laid down on the ground next to Annie. But her big tongue kept licking my face. I did manage to get a 30-minute nap.

Things were not looking very promising. I decided to stay until 10 a.m. At about 9:15, Mike Mosel texted me to see if I had seen any turkeys.

Then I heard a cackle but in the woods far down the creek. I called with my loudest yelp. He answered. I waited a while before calling again. He answered again and was closer. I knew I had him on a string now.

I pulled my face mask down and petted Annie. The gobbler sounded off again. I waited about two minutes and made a very soft yelp. To hear that soft call he would be very near. He was. Soon I saw his red and white head go under the fence. He came right into my open field in full strut. Those beautiful tail feathers looked like a huge fan. He was a very large bird.

The big tom headed right toward me. I knew I didn’t need to call again. Normally, I would not shoot a gobbler in a full strut because they pull their neck and head in close to the body. But he had his neck stretched high looking for the “hen.”

At 34 steps, I pulled the trigger. He never even flopped. I released Annie. She thought she would retrieve the “duck.” What a surprise. She attacked the dead gobbler and began tearing feathers off the breast.

It had been a classic call and shot. Sometimes, late in the season, when most of the hens are already nesting, a gobbler will be eager to find one hot hen that hasn’t been bred. Too bad for him. He should have been content with his past success with the hens.