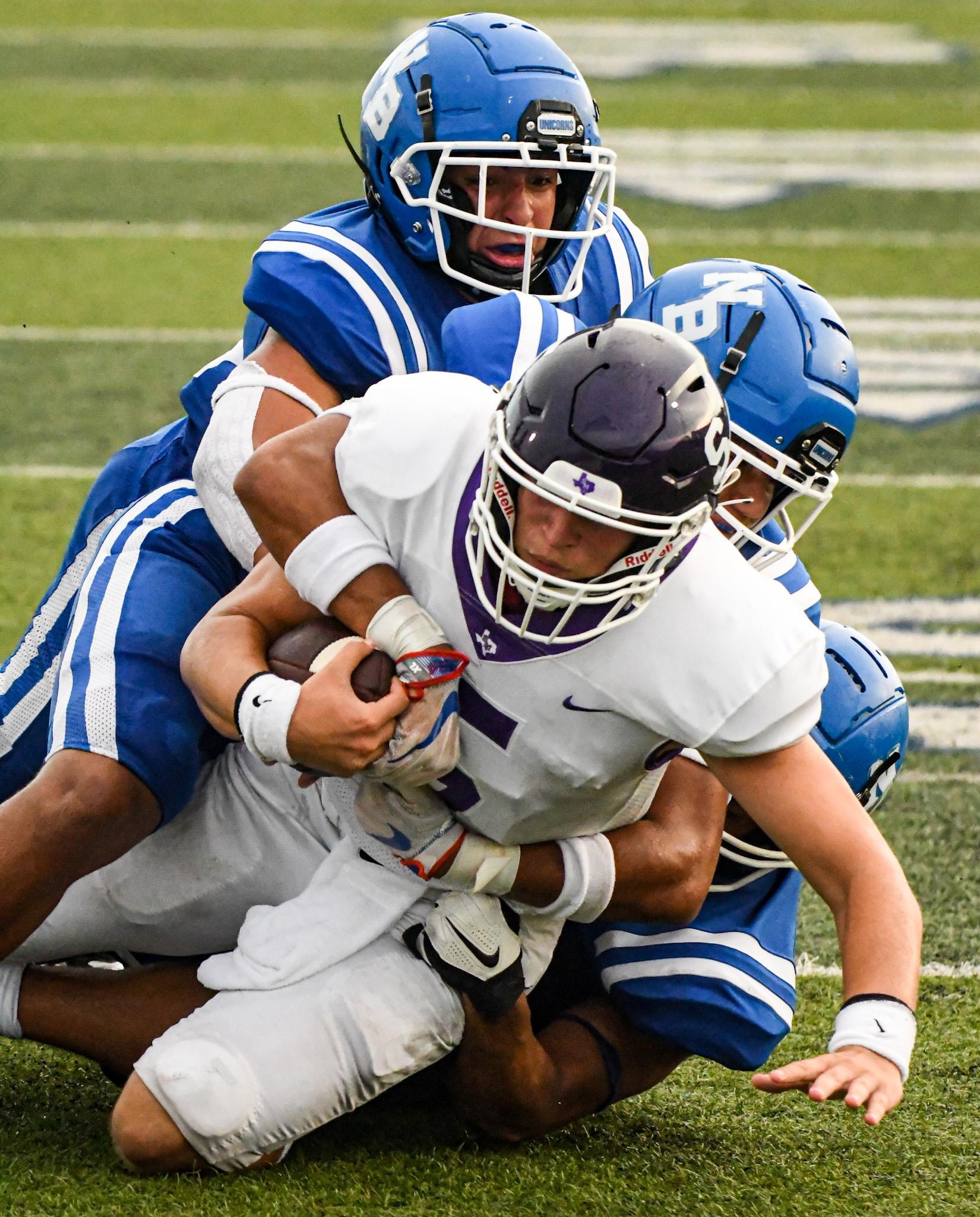 After Friday night’s 35-34 loss to San Antonio Holmes (2-0), head coach John Walsh read off his play sheet out loud. The card had seven names on it, all skill position players who were hurt and had to miss time at some point in the last two weeks. In the end, the durability of the team might’ve cost it a chance to grasp its first win of the season. Instead, Holmes outscored San Marcos (0-2) 14-6 in the second half, stealing the Rattlers’ hope right from their hands.

The bug jumped from player to player. Senior running back Kanui Guidry was tackled on the opening kickoff return and went down grabbing his right leg. He got up but was assisted off the field by trainers. Luckily with the offense the Rattlers run, multiple backs are needed and they came up huge. Senior Jake Rodriguez-Scholz filled in nicely, scoring his first touchdown of the night from one yard out. Holmes found the end zone on its next possession as senior quarterback Christopher Medelez broke containment for a 43-yard rushing touchdown, tying the game at 7-7.

DeLeon got hot before halftime, leading his team on a 12-play, 63-yard drive ending with a 5-yard passing touchdown to sophomore receiver Tony Diaz, giving the visitors a 21-14 lead with 4:08 left in the second quarter. DeLeon went 4-6 and 49 yards on that possession.

But during the next one, he was on the sideline dealing with what Walsh said was wrist swelling in his arm. Backup sophomore quarterback Kutter-Gage Webb trotted onto the field instead. His first career throw on varsity, a 87-yard touchdown to Diaz, another backup, set up by perfect pocket presence and an impressive shoulder fake to throw the defense off. The Huskies would go on to score with three seconds left in the half as San Marcos took its injuries and a 28-21 lead into halftime.

With Guidry and DeLeon out, and starting running back Jaidyn Brown, receiver Jamil Gordon and defensive back Malik Gordon all unavailable ahead of the game, the others had to step up. But that’s easier said than done.

The first play of the second half was an 80-yard kickoff return by Huskies senior Joaquin Ramirez. All momentum had swung to the hosts as Medelez connected with junior receiver Nathan Gonzales, who bobbled the ball, gathered himself and scored near the left pylon. The 35-28 score was Holmes’ first lead of the night with 8:26 left in the third.

Both teams’ offenses went silent. Rodriguez-Scholz scored again from two yards out to bring the game to one point. Walsh and company had a decision to make: kick the field goal and go to overtime or go for two and solidify the first win of the season. The staff chose the latter.

“We got the play where we line up in the stack and we shift. If they jump offsides and we get five yards then we’re on the one-, one-and-a-half-yard line, then we’re gonna go for it. If they didn’t give us that call, we were gonna kick the extra point and go to overtime,” Walsh said. “So once they called offsides on them and we’re on the one-and-a-half-yard line, we’ve been moving the ball in eight yard chunks. We gotta get behind the big boys. We were gonna run the ball for one yard, so we had to run that ball for one yard.”

Here is a slight replay of the two-point conversion stop at the one by Holmes. pic.twitter.com/QViQ86ImQl

The Rattlers ground game was averaging 6.5 yards per carry on the same drive, so they decided to go for it and were stopped at the goal line. The defense retaliated with three-straight stops. The visitors had one last chance to steal a win on the road with its reserves but Webb was picked off on the first play of the drive, sealing San Marcos’ fate, 35-34.

San Marcos finally gets a taste of a home game next Friday night against San Antonio East Central (2-0) inside San Marcos Toyota Rattler Stadium at 7:30 p.m.