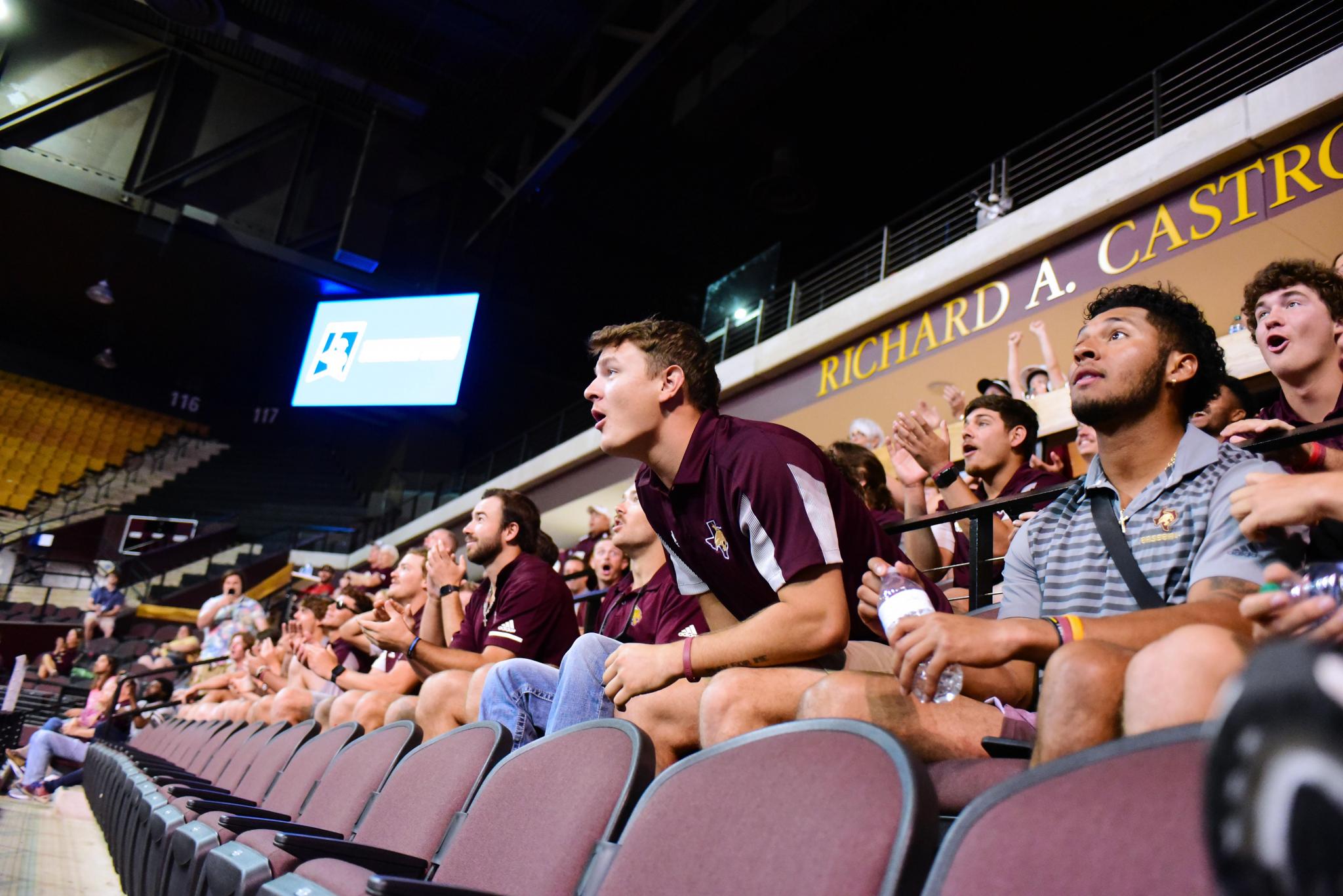 After gathering in the Richard A. Castro Legacy Club inside the University Events Center earlier in the morning, the Texas State baseball team moved to the stands directly underneath the club to watch the NCAA Selection Show on Strahan Arena’s jumbotron. Cameras were set up on the floor of the stadium, capturing the group’s reaction on a live feed sent to ESPN.

The Bobcats were joined by friends and family, as well as some Texas State legends in former head baseball coach Ty Harrington and former head volleyball coach Karen Chisum. University President Denise Trauth was also in attendance along with Director of Athletics Don Coryell.

Texas State went into the selection show joking and laughing, enjoying the event Coryell and the baseball staff put together. None of the players ate any of the catered food before the selection show — partially because it arrived after the team sat down, but also due to the team’s eagerness to find out its destination.

Texas State’s first potential regional in mind was revealed early on in the release of the 64-team bracket, and it was also the place where the Bobcats took down then-No. 1 Texas on March 9: Disch-Falk Field in Austin. Playing in a regional just 31 miles away would’ve been accessible to many of the maroon and gold’s fans but the NCAA had other plans in mind.

Louisiana Tech, Air Force and Dallas Baptist were all selected to join Texas in the regional. The Bobcats’ name wasn’t called, with claps, laughs and even a “dangit” coming from the crowd of players when they learned they wouldn’t have the easy travel of heading north up I-35. Some nerves were visible, with players shaking their legs and biting their nails in eagerness to learn where they’d go instead.

It was mainly quiet until the next Texas-based regional appeared on the jumbotron. Senior outfielder John Wuthrich was seen rubbing his hands together next to many other Bobcats doing the same as soon as Texas A&M footage and the NCAA’s College Station Regional graphic appeared on the big screen.

Once again though, the Bobcats were hit with a little bit of confusion.

Texas State watched Oral Roberts, TCU and Sun Belt tournament champion Louisiana get sent out to Blue Bell Park — making the Bobcats question themselves for the first time during the selection show.

“Being here for five years, we did the show one time in 2019 and we were (in) the first four out,” Wuthrich said. “So we got halfway through it and I was like ‘No way we’re gonna get snubbed here, right? Like, there’s no way,’ We were thinking that we were gonna go to Texas (or) A&M, somewhere we’d been before.”

Even though there were a few more jitters felt in the room after Austin and College Station passed, the overall optimistic vibe in the seats under the Castro Legacy Club remained the same heading into the second half of the bracket.

The selection show went to commercial break for the first time after naming half of the 64 teams competing for a trip to Omaha. By this time, three schools from the Sun Belt had already been selected. Coastal Carolina gets ready for a No. 2 versus No.3 matchup with Virginia. Louisiana — a No. 3 regional seed — plays TCU in the College Station Regional. No. 16 overall seed Georgia Southern hosts its own regional in Statesboro, Ga., for the first time in program history, playing UNC Greensboro in the opener.

Texas State head coach Steven Trout’s demeanor didn’t change but one Bobcat was heard saying “if we don’t get selected, again …” It displayed the nervousness of the team, even as the Sun Belt’s regular season champion.

Texas State was engaged in the show the whole time it was on. Phones appeared to keep the attention of the Bobcats during the break as players went on social media sites while looking up the bracket and projections.

After watching the closer regions such as Austin and College Station pass them by, the animation of No. 2 overall seed Stanford’s regional made the watch party’s reaction peak.

Texas State was selected as the No. 2 team in the regional, going up against No. 3 UC Santa Barbara in the opener. The Cardinal and Binghamton rounded out the group. Although no players stood in excitement, they did throw up Bobcat signs and clap for themselves. Some players were late, not knowing they were about to be selected, but some got their phones out just in time to record the first at-large berth the school had since 2011.

The Bobcats and Gauchos are slated to play in Palo Alto, Calif., on Friday at 8 p.m.

After a couple more teams received the same news as the Bobcats did, players made their way up the stairs in Strahan Arena and headed back into the Castro Club. In the corner, head coach Steven Trout and head softball coach Ricci Woodard spoke to each other about the day. Trout told Woodard “thank you so much for coming” as the softball coach made a swift exit.

Players found family and gave them hugs. Senior outfielder Isaiah Ortega-Jones said he would have rather been in Austin or somewhere close but “California isn’t too bad.”

Coryell brought everyone in the Castro Club together to talk about the team.

His opening statement thanked everyone who came out to support the team. Coryell said, “we’ve gotten to a regional, now we’re gonna add to that a little bit.”

Immediately after, Trout, standing next to Coryell, started off by thanking multiple people including Trauth and Coryell for everything they did to make these things possible.

“It’s unbelievable what you guys have done to give our guys the resources to be successful,” Trout said. “It takes everyone to make that happen, the entire administration. This is a full team effort.”

Before finishing his final statement, Trout choked up a little as he got emotional thinking about his team and how far they’ve come since last season.