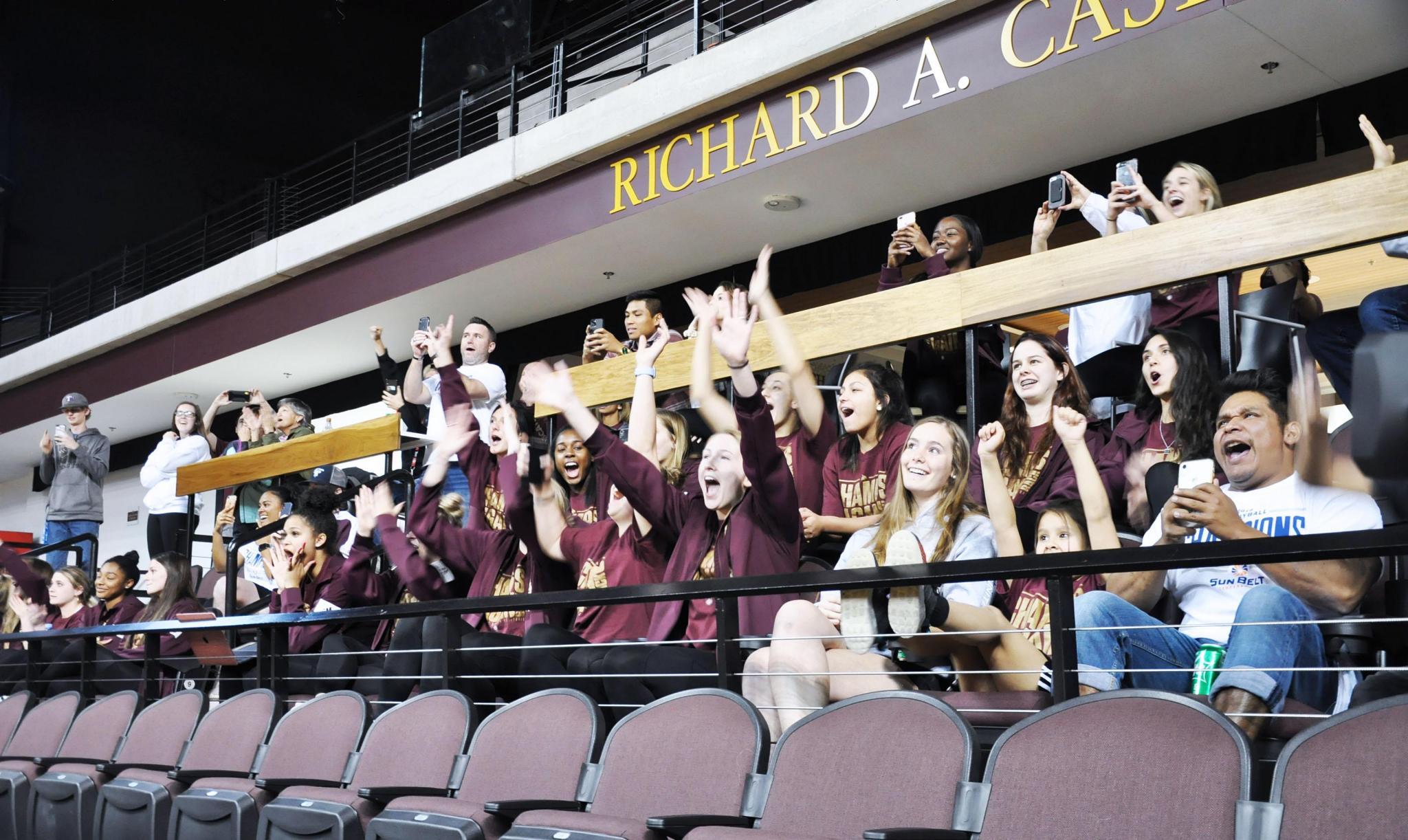 A line of 15 cookie cakes sat on the counter of the Richard A. Castro Legacy Club Room inside Strahan Arena Sunday night.

The deserts were about a foot in diameter, with the message “Go Bobcats!” spelled out in icing, along with a volleyball logo in the center and maroon and gold puffs lining the perimeter. The treats were slowly consumed by players, coaches, athletic directors and fans waiting to find out where Texas State would be seeded in the 2019 NCAA Division I Women’s Volleyball Championship. 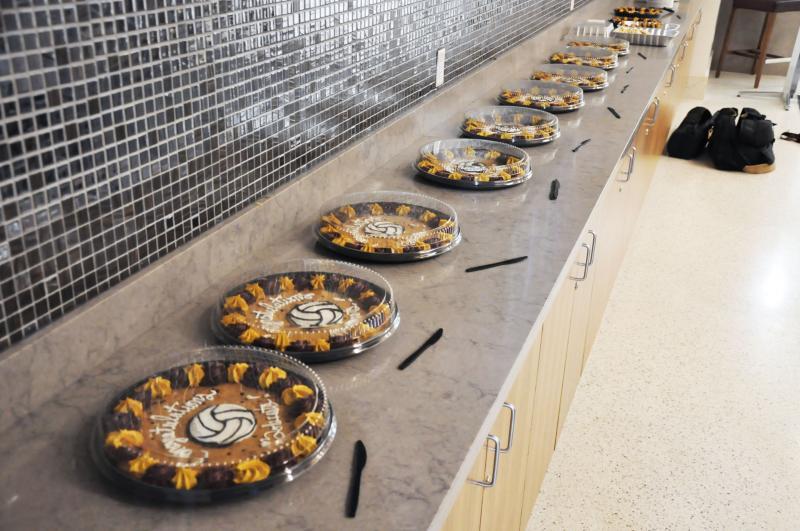 The team received an automatic bid last week after defeating Coastal Carolina in the Sun Belt championship match at home, 3-1. Karen Chisum gave her players Wednesday through Saturday off to recover from the conference tournament and enjoy the Thanksgiving holiday. She called them back on Sunday to keep them from rusting.

“It was good,” Chisum said. “The kids hadn't touched a ball in four days, they were in great moods, they were good with the ball. I think we're better now than maybe we were last year. And I thought we were pretty good.”

Still, there was an hour and a half to kill before the selection show got underway. Sophomore setter Emily DeWalt, senior defensive specialist Micah Dinwiddie, sophomore outside hitter Kenedi Rutherford and freshman defensive specialist Kayla Tello filled the time by learning a dance routine on the Strahan Arena floor, choreographed by graduate assistant coach Michelle Maxwell and recorded to TikTok, a social media app, by freshman middle blocker Tessa Marshall.

“We just had to learn the dance,” DeWalt said. “I have no idea (what song it was), they just put me in it.” 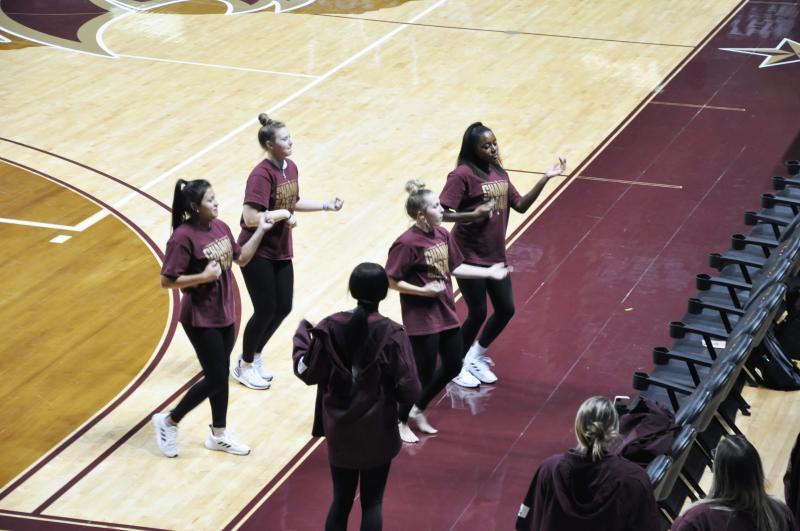 A handful of players stayed inside the club, enjoying the refreshments. Chisum made the rounds, mingling with everyone in attendance.

At 7:30 p.m., all the TVs inside the arena were changed to the selection show on ESPNU. However, the only audio came out of the stadium’s speakers, so the crowd of viewers migrated to the bar area of the club to watch on Strahan Arena’s big screen as the players took their seats in the bleachers.

Baylor, the No. 1 overall seed in the tournament, was the first team to be revealed in the bracket. A few spectators cheered when Texas State was not one of the next three teams named, meaning the Bobcats wouldn’t have to face the Bears in the first two rounds.

Junior libero Brooke Johnson crossed both her fingers while No. 12 seed Hawaii’s regional was being announced, hoping the team would be awarded a Pacific getaway. She sighed when Washington State was the last team picked.

Texas A&M was the next team named, claiming the No. 13 seed. A few Bobcats held their breath in anticipation. But it still wasn’t their time. They had to wait until the final regional was announced to hear their name called.

Texas, the No. 2 seed in the tournament, was slated against Albany (NY), leaving one final match to be revealed. UC Santa Barbara was named Texas State’s opponent and the maroon and gold were the final team shown on the bracket to end the unveiling.

Chisum was left a little confused. She had heard from multiple sources in her volleyball tree that the selection committee wouldn’t send her team to Austin two seasons in a row. She was expecting to head to Waco or College Station.

She sensed a bit of disappointment from her players after discovering that wasn’t the case. She understood. She wanted them to experience a new site after last year. But she also knew they had to view returning to Gregory Gymnasium as a positive.

“We felt pretty comfortable that we weren't going to Austin. But again, we're very comfortable with Austin. It's close to home and we're going to have a good — great crowd,” Chisum said. “I told them, 'Hey you guys, we've done this before. We know that we know that facility. Relax. I know you're a little disappointed you're not going someplace else, but we're in the national championship. Be excited.”

Chisum said she knows “nothing” about UC Santa Barbara. The Gauchos received an at-large bid to the tournament, finishing third in the Big West Conference. They have one common opponent with the Bobcats in Long Beach State. UCSB beat the 49ers 3-1 at home on Oct. 29 but were swept by them 3-0 on the road on Nov. 15. Texas State defeated the team 3-2 at the Long Beach State Mizuno Classic on Sept. 5.

DeWalt expects the Bobcats will watch the tape on both of the Gauchos’ matches to prepare for their first round matchup.

“I think we just have to step up another level,” DeWalt said. I mean, we came in today from break just rejuvenized and we've had a really good practice. So as long as we continue that this week, we should be good.”

Texas State (24-8, 14-2 Sun Belt) and UC Santa Barbara (22-5, 12-4 Big West) will square off at Gregory Gym in Austin this Thursday at 4:30 p.m. Chisum knows there’s a possibility of playing the Longhorns in the near future, but for now, her sole focus is on the Gauchos.

“We're prepping for Santa Barbara. They are different, we haven't played them,” Chisum said. “We invite all the Texas State fans and Bobcat friends Bobcat nation and get up to Austin … It's a plus going at Gregory Gym. All except our freshmen have played there before. So, I don't know that you'll see a lot of nerves Thursday night.” 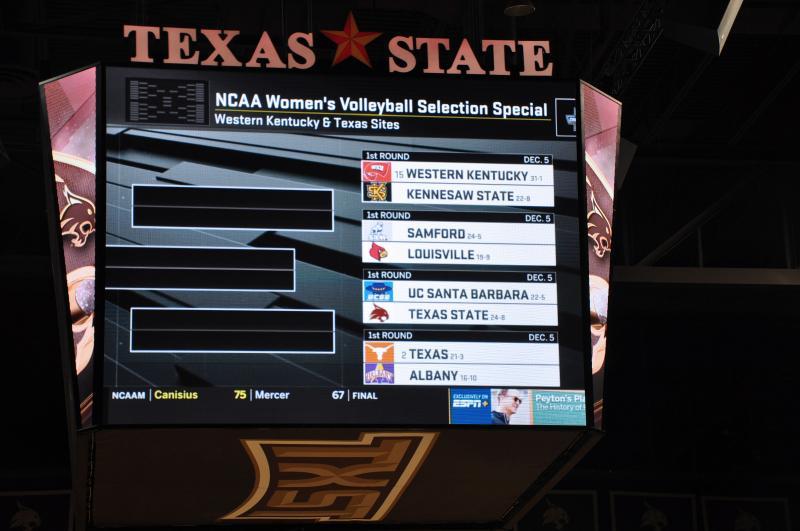