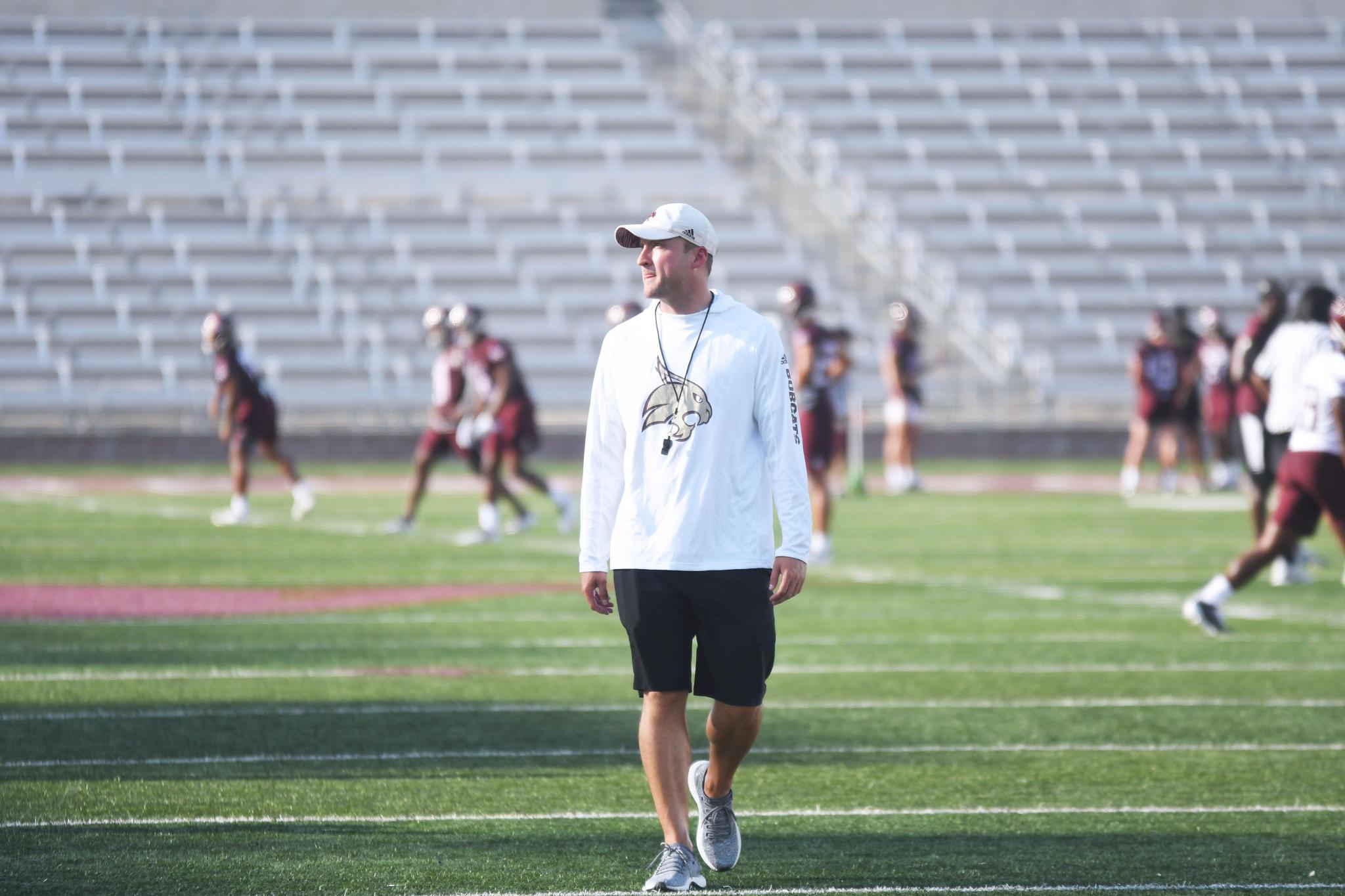 Kyle Field is tough to simulate.

Texas State tried. The team blared music as loud as the Bobcat Stadium speakers could go during practice this week to imitate the 102,733 fans the College Station stadium holds.

“It doesn't give it justice on how loud that place can be,” head coach Jake Spavital said. “There's a reason why they call it the 12th man. It's a loud place. It's the loudest venue in college football.”

Spavital knows the site well. He coached on the sidelines for three seasons as Texas A&M’s offensive coordinator. It was the first place he held the position. The first place he called plays.

And now, in his first game as a head coach, he’s heading back for the first time since leaving.

“It's interesting that when you take this job and you know, you don't really look at the schedule until after you kind of really look at, like, if you can win here or not. And then you realize the first game is in Kyle Field,” Spavital said. “It's kind of a surreal moment … And from where I was then till now, you know, I've made a lot of progress, learned from my mistakes.”

Kevin Sumlin was in need of an offensive coordinator in 2013 after Kliff Kingsbury left to become the head coach at Texas Tech. Kingsbury elevated Texas A&M’s offense from No. 55 to No. 7 in his lone season with the Aggies and helped junior quarterback Johnny Manziel earn the 2012 Heisman Trophy.

Sumlin didn’t want to lose the momentum. He needed somebody young enough to relate to Johnny Manziel, just as Kingsbury did, who also already knew the ins and outs of the offensive system.

Spavital crossed paths with Sumlin and Kingsbury in 2009 when the trio coached at Houston. Sumlin was at the helm for the Cougars. Kingsbury was an offensive quality control coach. Spavital was a 24-year-old graduate assistant.

Spavital spent the next season as a GA at Oklahoma State and was then hired at West Virginia as a quarterbacks coach in 2011, working directly with Geno Smith. Smith’s quarterback rating improved in both years under Spavital.

Sumlin brought Spavital in for an interview.

“He was afraid that if you put a guy that came in that's completely the opposite of Kliff Kingsbury, you probably wouldn't have the right mesh,” Spavital said. “And at the time, I knew the offense better than anybody else.”

Spavital informed Mountaineers head coach Dana Holgerson he was leaving to join the Aggies on Jan. 10, 2013, taking the title of co-offensive coordinator and quarterbacks coach. Texas A&M became the No. 3 offense in the NCAA that season, averaging 558.5 yards per game, and finished the year at 9-4, defeating Duke in the Chick-fil-A Bowl. Manziel threw for a career-high 4,114 yards and 37 touchdowns in his senior season.

The next two years in College Station were “interesting” for Spavital. He was given the outright offensive coordinator title at the end of his first year. Kenny Hill, the first recruit Spavital signed with the Aggies, was named the starting quarterback for the 2014 season and threw for 511 yards and three touchdowns in the team’s season opener against South Carolina. But after a three-game losing streak that ended with a 59-0 loss at Alabama, Spavital elected to start true freshman Kyle Allen — the No. 1-rated pro-style quarterback in the 2014 class. Texas A&M finished the year as the No. 4 offense, with a 8-5 record.

Spavital signed No. 1-rated dual-threat Kyler Murray and No. 9-rated JUCO quarterback Jake Hubenak during the offseason. It caused a bit of tension between the players and the coach.Spavital could only start one. Allen won the job, but only held it for seven games before Murray and Hubenak were given chances. Spavital cycled through all three of them in the final five games. The Aggies fell to No. 30 in total offense and repeated at 8-5.

“Going into my last year there, I knew that we had to win, like, nine, 10 games for me to keep my job. And we didn't do it,” Spavital said. “Halfway through the season I knew it was done, so I'd already started dialogue with a lot of other places. And that's how the (Southeastern Conference) is, you know, it's a results-driven league where if you're not winning the league, you're probably get fired.”

Sumlin and Spavital mutually parted ways at the end of the 2015 season. Spavital went on to become the offensive coordinator and quarterbacks coach at California and West Virginia, and now head coach at Texas State.

Spavital still remembers the crowds he saw at Kyle Field. He told his players they’ll need to over-communicate against the No. 11-ranked team to navigate through the noise.

Sumlin and most of his staff are no longer at Texas A&M. Neither are most of the players from the Aggies’ 2015 roster. But Spavital still has some idea of what he’ll be up against and is ready to begin his head coaching career in a familiar place on Thursday at 7:30 p.m.

“I'm excited, you know?” Spavital said. “As coaches, you know, once you get through that, once the ball’s kicked off, you're focused on the task at hand. But I'm going to enjoy going back into College Station.”