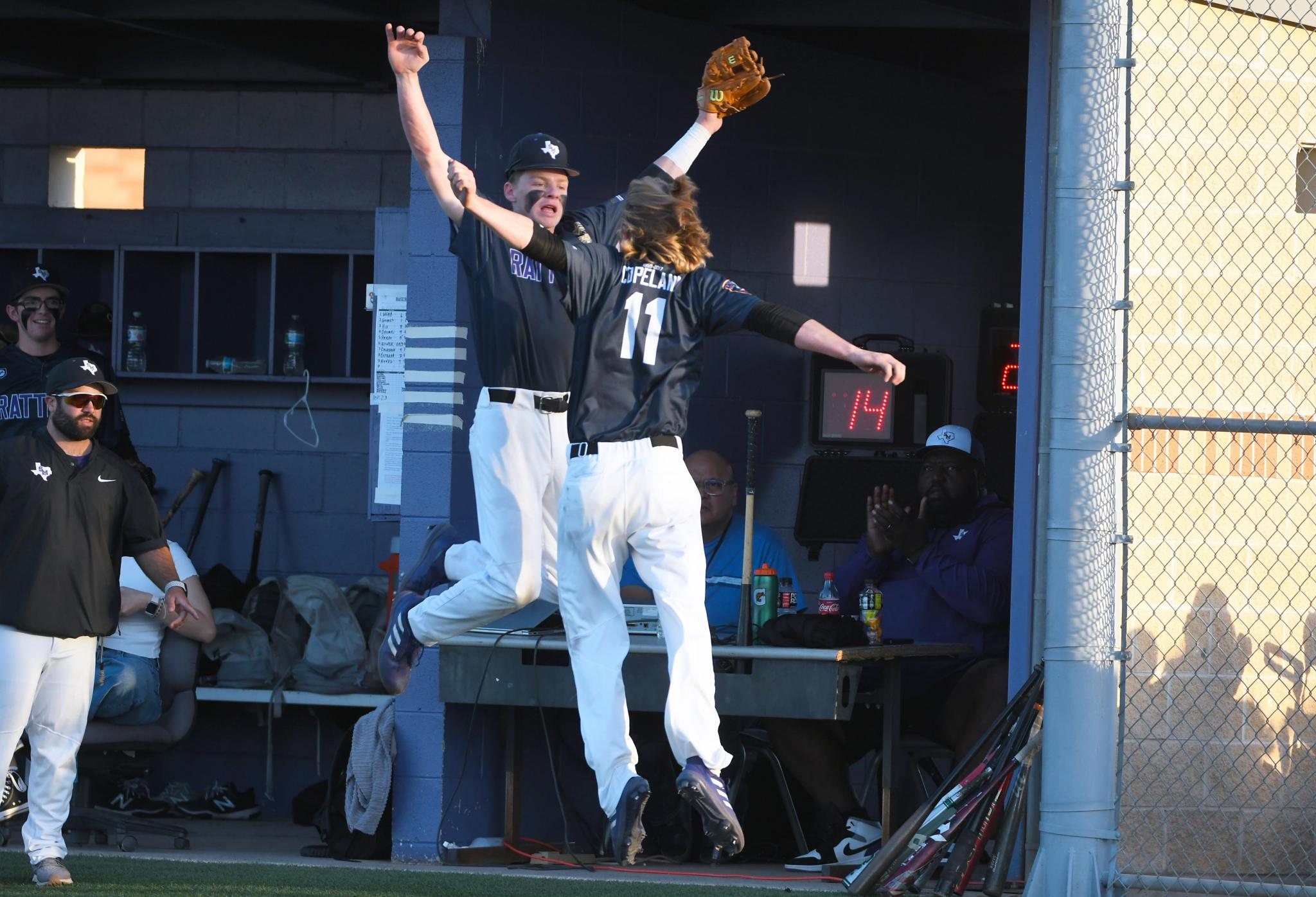 Over the course of the 2020s, the last name “Webb” and sports in San Marcos have become more and more intertwined.

Bryan Webb has been the head baseball coach at San Marcos high school for 16 seasons. Kannon Webb, Bryan’s second son, is currently in his second season playing wide receiver for the Texas State football team, and before that became Rattler football’s all-time tackles leader while also starting on the baseball team. Gunnar Webb, Bryan’s oldest son, lettered in football and baseball as well, and Britney Webb, Bryan’s wife and Gunnar and Kannon’s mother, is an athletic training professor in Texas State’s health and human performance department.

That leaves Rattler infielder Kutter Gage, the youngest of the Webbs, who Kannon calls “the best athlete in the family.”

“KG,” as his teammates like to call him, has already begun to build his own legacy in San Marcos and it won’t be over when he graduates from the purple and white — in fact, it’ll just be getting started. On Mar. 19, Kutter Gage announced his verbal commitment to Texas State Baseball midway through his sophomore season.

Dream come true. Blessed to announce my commitment to play in my hometown at Texas State University 🐾 #EatEmUp pic.twitter.com/sibpjaP61h

“When (Bobcats head coach Steve) Trout called me, it was nothing but relief,” Kutter Gage said. “It was relief and happiness. And I’ve worked all my life to go. I mean, it’s always been a goal to go D1. Especially (with) them being a top 20 program now, it’s good. It’s emotional, but it’s a big next step for me and my family. The coaches are great. San Marcos is great. You got the river right here.

“And growing up here, it’s always been Texas State. I’ve always gone to every single football (and) baseball game. So I’ve been growing up around (Texas State) most of the time. It’s a great town (with) great coaches, (plus) now they’re a top 20 program so it’s even better.”

The prospect of being able to play in his hometown, going to school with his brother and being close to his family made the decision an easy one.

The Webbs had a family meeting of sorts to break the news. Britney, Gunnar and Kannon were almost completely oblivious to the decision while Bryan had some inklings it may be coming down the pipe.

“It was emotional. When (Texas State) called and I had them all in the room, you know, Kannon, Gunner and my wife and me,” Bryan said. “We were sitting there and I don’t think they really knew what was happening. I got pretty emotional, his mama got pretty emotional, Gunnar was pretty emotional. It was a great day because you got two kids going to a great college and I get to drive five minutes up the road and go watch both of them play. So when the day the call came in, it was a satisfying day. But like I told Kutter Gage, I said, ‘Now the work just begins. You’ve got enough to get there and now you got to go keep it.’ So it was an emotional day.”

Kannon had the unique opportunity to come hear the news in person because of his decision to play in town at Texas State. One of the main appeals for Kannon becoming a Bobcat was getting to watch Kutter Gage grow up and go to his baseball games in the spring.

Now, he’ll get to watch his brother at Bobcat Ballpark before he graduates, and the pair will have the opportunity to go to school together at the university they grew up around.

“Since we were little, we always knew Kutter Gage was going to be something special,” Kannon said. “I was just hoping that he could stay pretty close. Because I mean, I stayed in San Marcos and went to Texas State so I could see my little brother grow up. So the fact that he gets to come to Texas State and be around for even longer, it just brings me so much joy. It’s just kind of surreal.

“I always made a joke. I said, ‘They’re gonna take down the Lyndon B. Johnson statue and put up my dad’s statue up there for bringing two Bobcats.’ But it’s a blessing. Just to have one big Bobcat family and see my little brother accomplish his dreams, I’m extremely grateful for it and joyful. I’m happy for my little brother.”

Only halfway through his sophomore season, Kutter Gage has already made one of his childhood dreams come true. Now, the future Bobcat will get to fully focus on leaving his legacy at San Marcos High School before driving 10 minutes up Highway 123 in 2024 to begin a new one at Texas State.

“I moved here when I was six from Abilene and ever since I’ve grown up and I’ve been at the river with my brothers’ friends,” Kutter Gage said. “I’ve been here all my life (at) San Marcos High School, and I’ve just grown up through the community and everybody’s welcoming and nobody’s better than anybody. We all just bond as a family, even though we’re different colors and look different, everybody bonds as a family and it makes it a welcoming community.”