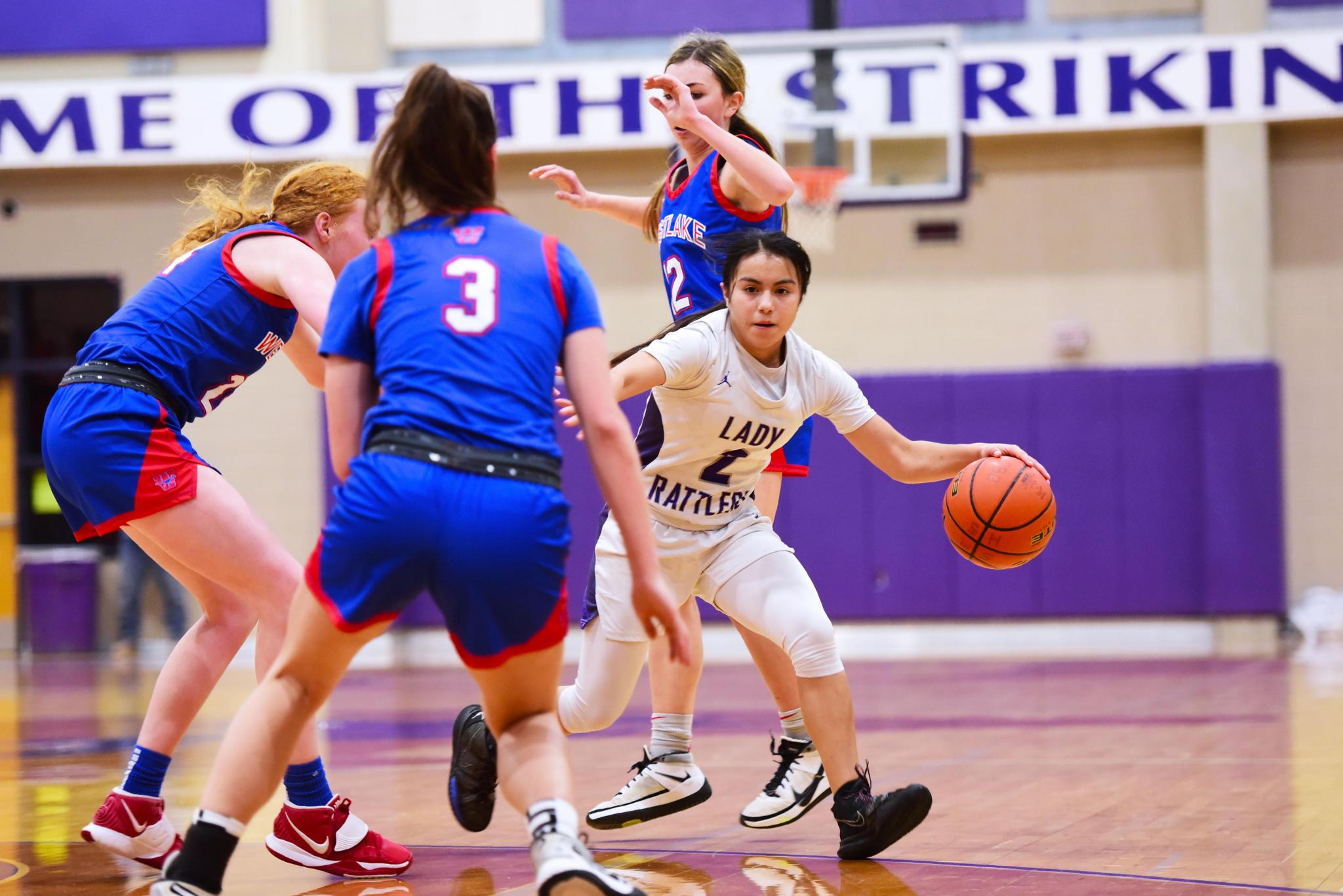 Friday night’s game in the Snake Pit was a tale of two halves.

Despite San Marcos’ fast start hitting three 3-pointers in the first quarter and maintaining a six-point edge heading into halftime, the purple and white had to fight their way to the free throw line to pull off a season sweep of Austin Westlake in Jermaine Ervin’s first year as head coach.

The Lady Chaparrals came out in the second half running a 2-1-2 zone on defense to counter the Lady Rattlers’ potent offensive attack in the first half. It worked so well in the third quarter that San Marcos’ first field goal of the second half didn’t come until the last 10 seconds of the period.

Still, the purple and white’s stingy defense consisting of 10 steals and 20 forced turnovers kept the Lady Rattlers’ deficit at just one heading into the fourth quarter. A seven-point run led by freshman guard Ezra Tobias and senior guard Angelina Sotelo in the latter half of the period led to San Marcos retaking the lead at an opportune time — right as they entered the double bonus. The purple and white capitalized, drawing fouls and going 6-6 from the free throw line in the clutch to secure the 40-33 victory.

“I was very impressed by the ladies, one to nine, all the way down the bench. The support on the bench, the support in the game, the fight in the game, (we) played with a little bit of edge tonight,” Ervin said. “We've gone through some adversity through the week. We came together for a common goal. We focused on the task at hand, (we) hit a lot of adversity in that second half. But we were able to rely on our defense a little bit to keep it close (and) not let them get too far away from us, and then made a couple timely plays and big free throws at the end to seal the game.”

Senior guards Dede Pierson and Sotelo led the way for the purple and white in their victory, combining for 23 points, seven rebounds and five steals. Pierson and Sotelo were perfect at the line in crunch time, and also created the turnovers that led to their free throws. While in the middle of the game the senior tandem was slowed down by Westlake, their strong start and finish to the game was irreplaceable for San Marcos.

“(Pierson) came in with a fire, (and played) hungry, (and) Angelina's our floor general. She tries to get us into everything. So it was good to get her going with some timely shots and buckets (in the first),” Ervin said. “(In the fourth,) we had all of our frontcourt girls and our backcourt girls starting to connect when we were struggling and our defense was still solid. Dede went out there and got us two steals. So we were able to fight through that and Angelina figured out that she needed to be off the ball to find some shots to create.”

The Lady Rattlers will look to continue their playoff push and complete another district sweep against cross-county rival Buda Hays next Tuesday on Jan. 25 at 7 p.m. inside the Snake Pit. San Marcos won the first half of the rivalry 47-43 on the road on Dec. 21 of last year.

“We got a big game Tuesday night, and that's going to be our teacher appreciation night against Hays,” Ervin said. “They're coming across town and they're going to come down here and they're going to play their best. We had a tough, highly contested game at their gym. They’re big, they’re fast, they’re strong, so we're going to have our work cut out there.”

(Accidentally recorded one clip in slow-mo, so bask in its glory 😂)@smdrsports pic.twitter.com/DsPmJsgjwT