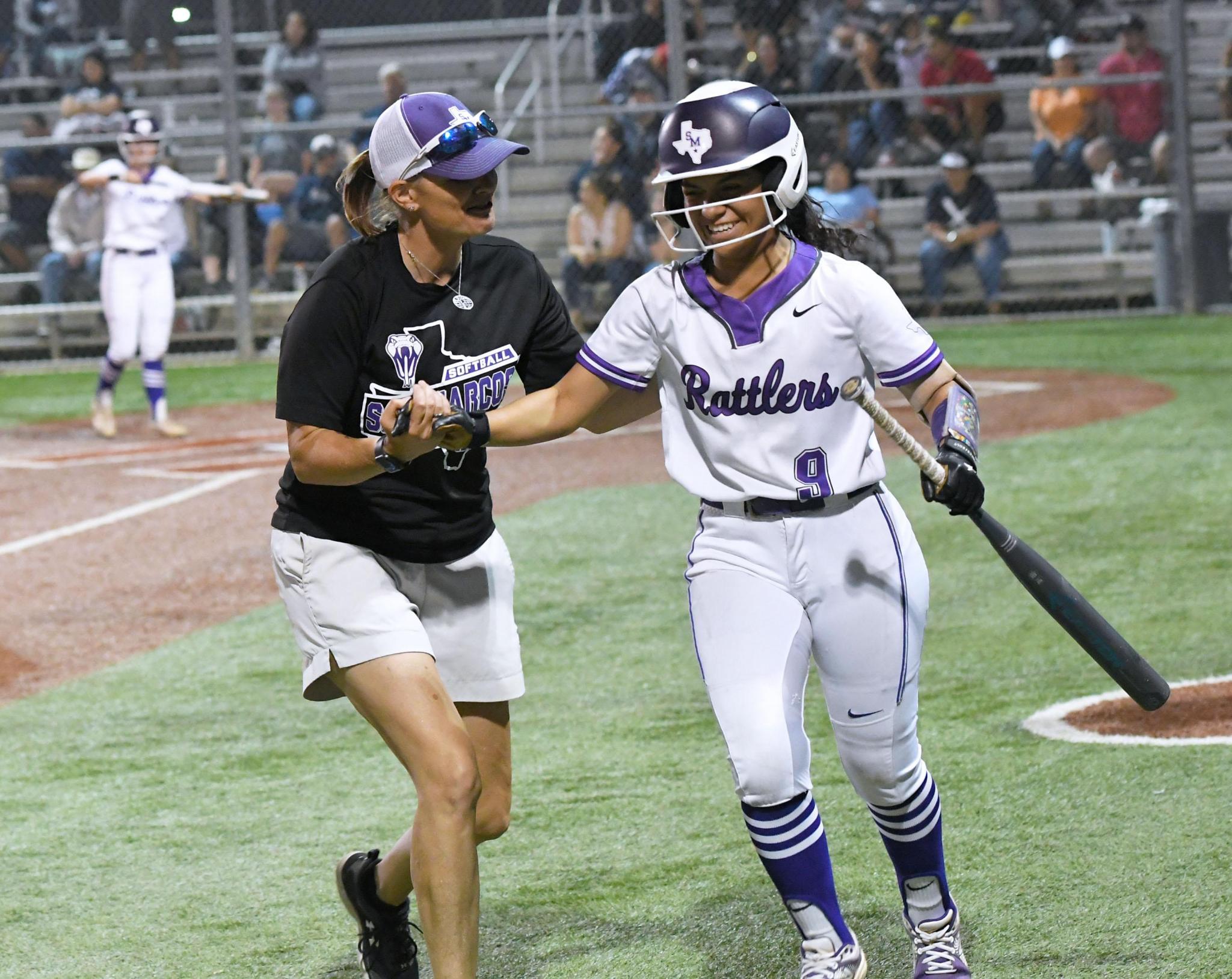 During its time in District 26-6A, San Marcos had yet to make a postseason appearance or notch a win over Austin Akins.

The Lady Rattlers did both Friday evening, beating the Lady Eagles 12-3 in dominant fashion and earning their first playoff berth since 2018.

After both teams put up donuts in the first inning, Austin Akins pushed a run across home plate in the top of the second inning. In the bottom of the second, the purple and white loaded the bases and drove in two runs on RBI singles to take the lead — but then struck out three straight times to hold the score at 2-1.

San Marcos would allow one run from the Lady Eagles, which tied things up at 2-2 heading to the bottom of the third. That’s when the Lady Rattlers took complete control of the game, putting up seven runs and building a nine-run lead in the process.

“When we loaded the bases in the second inning and had three straight strikeouts, I told them we can't win a ballgame like that,” head coach Cathy Stoughton said. “You've got to find a way to scratch out at least one (run). So when she came in and got those three strikeouts, I was a little worried that the momentum was (going to) shift. So for us to come back and make an adjustment in the box with a faster pitcher, (it was huge). McKeanne (Saenz) got us going (with a double off the wall). That was critical. Perfect (that it was) on Senior Night, it was a great shot and that’s what we needed.

“After those three strikeouts, I think we had four strikeouts in a row. For McKeanne to come in and do that, it was something that kind of gave us confidence like, ‘Wow, we can do this. We can hit.’ I think that was really the momentum change.”

The purple and white would carry their momentum through the final three innings, with junior infielder Angelina Alvarez hitting a two-run moonshot over the left field wall to extend the Lady Rattler lead to 11-2 in the fifth. The Lady Rattlers would push one more run across home plate in the sixth, where junior outfielder CJ Castilla hit an RBI single to left field.

The circle was held by junior right-handed pitcher Kayli Saenz for five innings and one out after she subbed in for senior Mercedes Layton in the second inning. Saenz held the lead for San Marcos, allowing only one earned run in the top of the sixth inning while earning the win.

“I had asked the pitcher that started (Layton) what (the umpire’s) strike zone was so I knew what to work with,” Saenz said. “And then I felt all the pressure and saw everyone looking at me, so I made sure to not mess up and be tight with everything.”

Saenz would make a highlight-reel diving catch in foul territory in the top of the seventh inning, where she’d finish off Austin Akins leading the purple and white to celebrate in unison in the middle of the diamond.

It was the last home game for eight of the senior Lady Rattlers — Bela Davila, Mercedes Layton, Annaleah Lombardo, Maya Richards, McKeanne Saenz, Bitsy Silva, Bianca Velasquez and manager Ana Martinez. The group of upperclassmen will now be tasked with leading the team through an unfamiliar environment in the playoffs.

But for just Friday night, the Lady Rattlers (12-17, 6-8 District 26-6A) relished in controlling what they could control and advancing to postseason play.

“I think tonight, too, we fell behind again. So at times, (we were) taking good pitches and swinging at pitches that we shouldn't have been swinging at, but we did make adjustments. So I think those will be keys for us going forward.”