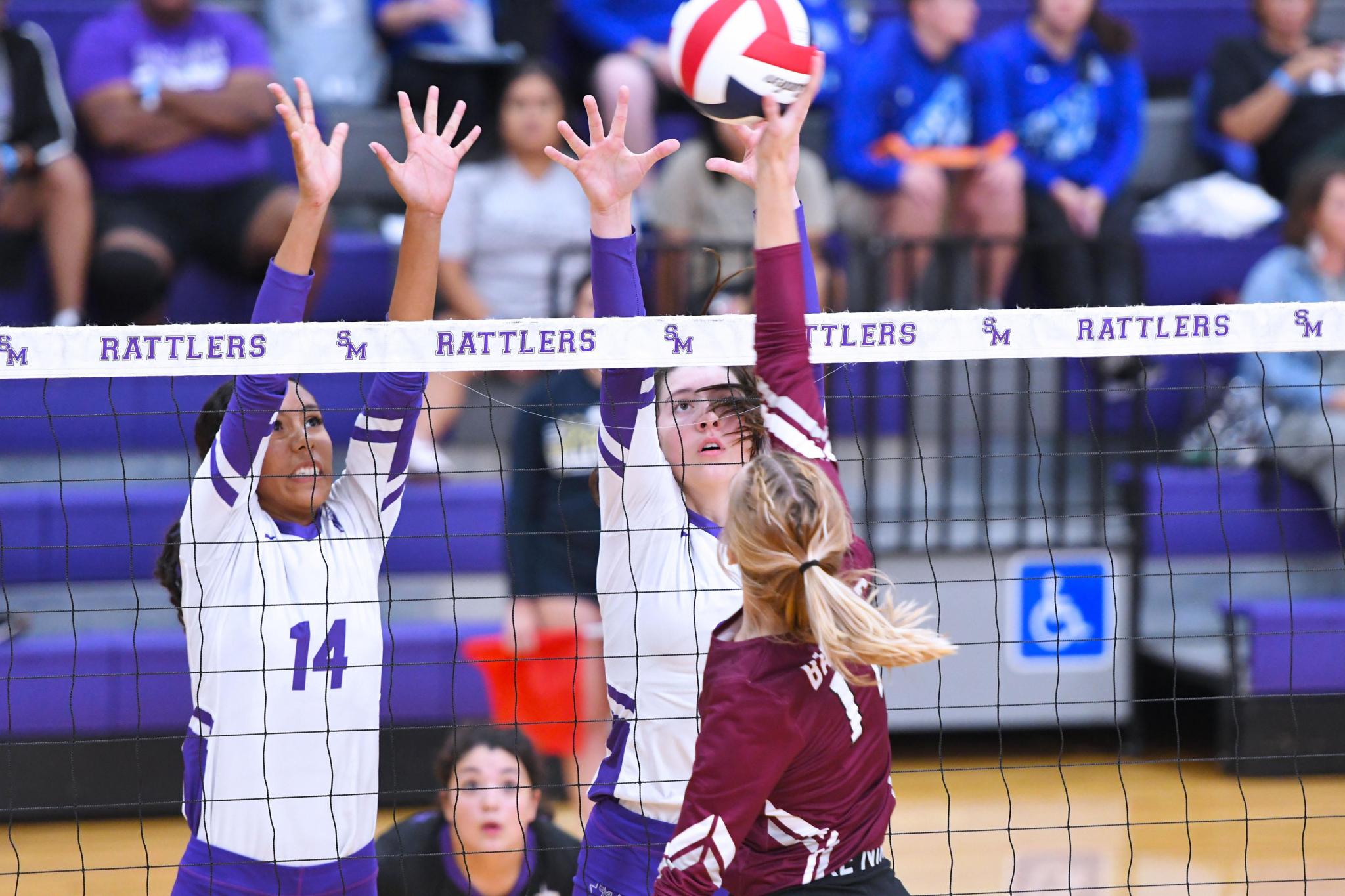 After traveling to Corpus Christi and Bastrop for San Marcos’ (14-10) first two tournaments of the 2022 season, the Lady Rattlers returned home for their annual Ragin’ Rattler tournament.

The purple and white played six matches of pool play throughout the first two days of the tournament, with three matches on Thursday and another three on Friday. Due to time constraints for the tournament, teams played three-set matches instead of five sets.

San Marcos began the tournament with local 5A opponent Kyle Lehman, where the Lady Rattlers prevailed 25-17 and 25-15 in a sweep. In their second match of pool play, the purple and white continued their hot streak to beat former District 26-6A foe Austin Akins 25-14 and 25-12.

In their third and final match of pool play on Thursday, the Lady Rattlers matched up with Bastrop. San Marcos struggled to get in rhythm during the first set, scratching out the win 25-22. The purple and white responded in the second set, jumping out to a 16-4 lead which led to a 25-10 victory in set two to finish the day 3-0 overall.

“I liked seeing other kids pick up, right now (senior Liana Guerra) is out with a sore rotator cuff so we don’t have our full lineup going and she was one of our big hitters,” head coach Megann Ollett said. “So that’s hurting us a little bit. But other kids are picking up the slack and going in there and taking care of business. So that’s nice to see, and just watching the whole team figure out their roles, come together and find their spot so that they’re unified together to keep moving forward — it’s been great to see. We’ve had some come to Jesus meetings and things are starting to turn. But now it’s just making this consistent all the time.”

Replacing two NCAA Division I outside hitters isn’t easy, but sophomore Brinkley Reeves and senior Elizabeth Salmon have done about as solid of a job as you can picking up the slack. The pair is still learning each game, but were forces on the outside throughout the first two days of tournament play.

“I feel like we did good (going 3-0), (and) — not to be rude — but the teams we were playing weren’t higher level teams,” Reeves said. “There’s other teams at this tournament that are a lot better than those teams. So I think we did get lucky with who we were playing today. (But) it gave us a good day to work on us as a team. Instead of worrying about the opponent, we were worrying about ourselves. As a team, we’ve been needing to work on keeping leads and starting off strong. So I think we worked on that a lot today—”

“I felt (like) the energy throughout the day would plummet and then go up. But, I feel like when we’re all having fun, the culture is there, and (when) we bring that we come back right away when we’re down.” Salmon added.

Senior setter Ruby Gordon and senior libero Callissa Castro also stood out on the floor for the Lady Rattlers, with Gordon dishing assists and setting up the offense while Castro made multiple diving digs throughout the matches.

Day two of pool play stiffened the competition for San Marcos, but it didn’t deter the purple and white. The Lady Rattlers were swept 3-0 by Austin Anderson on Aug. 16 in a non-district match, but started Friday beating the Lady Trojans in a 2-1 three-set thriller. San Marcos won the first set 25-23, then fell behind in set two to fall 15-25, but bounced back in set three to win 25-17.

The next opponent for the Lady Rattlers was another former District 26-6A opponent in Austin Bowie. The purple and white had another roller coaster of a match against the Lady Bulldogs. San Marcos lost set one 25-27 going to extra points, but came back to win set two 25-20 and finished the job in set three 25-22 to pull out the match 2-1.

After starting Friday 2-0 and the tournament 5-0, the Lady Rattlers were matched up against Justin Northwest — the team that’s won the Ragin’ Rattler tournament the past two seasons and advanced to the third round of the UIL Texas State Volleyball Championships in 2021.

“From Friday, I’m happy to see them bounce back (from not playing their best). They could have caved against Anderson — we lost to them the first time we played them — (and) they’re a talented team. Beating them in that first set (it) was good to see them finish. Then the second set didn’t go so well and I feel like we had a growing point. A lot of times in those tipping points, we’ll cradle, pack up our bags and call it a day (but) they fought back to win that third set. So that was good to see.

“And then (against) Bowie they had a lead and got comfortable. We came back to win the next two sets after that, so there was a lot of growth (and) people stepping up (and) taking care of business. We played Northwest, (and they’re a) great program (with) great athletes, everything like that. And to see them have fun and work on what they can control for the most part, was good and (we got) out there and worked on putting some new tools in our pocket.”

The Lady Rattlers will play in the gold bracket of their home tournament on Aug. 27, matching up with Keller Central at 10 a.m. The Lady Rattlers’ next non-tournament match is on the road against Canyon Lake on Aug. 30 at 6:30 p.m.

“We’re gonna see a lot of great competition tomorrow,” Ollett said. “At the end of the day, my goal every time they step on the court is we have to get better. Whatever happens on the score happens, but we have to learn from every play and get better because we still have a lot (left in the season). We still have two months ahead of us and we can’t plateau now, we need to keep on the up and up.”