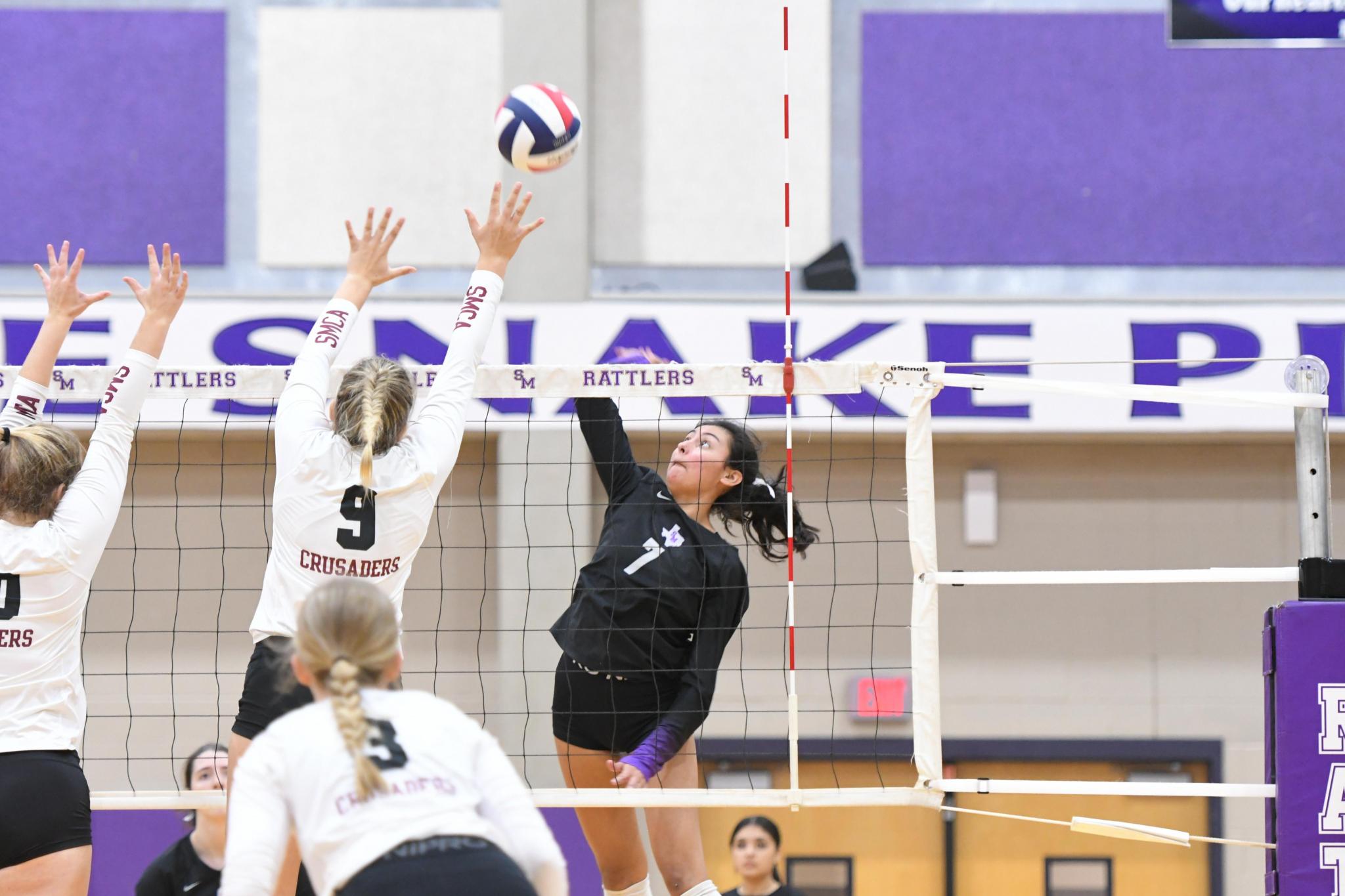 San Marcos left it all out on the floor conquering St. Michael’s in the Snake Pit on Tuesday night.

After taking the first set 25-23, San Marcos’ momentum took a hit. The Lady Rattlers dropped the next two sets due to miscommunication and internal mistakes.

Head coach Megann Ollett spoke on the team’s discipline after the game as a reason they fell behind early on. Nonetheless, San Marcos regained composure and enough momentum to take the match.

“I’m excited that they pushed through and were able to finish the game. I think there’s some discipline in our play that we need to work on so we don’t get ourselves in those situations or don’t get caught in the rally,” Ollett said. “But I am impressed that they were able to keep their cool and move forward because that is something we’ve been working on.”

At moments in the match, it looked bleak for San Marcos. Serving errors and other mishaps plagued the Lady Rattlers, putting the visiting Crusaders in an advantageous position. Ollett said depth helped her team find the momentum to get back into the match heading into the fourth set.

“I (made) some changes in the rotation and I think it added a little freshness to us. Then we also switched up some stuff on server seats,” Ollett said. “I think once they have moments (that make them) think that they can believe (in themselves) they get after it, but (for us) it’s (about) keeping them believing every point of every match.”

Sophomore Brinkley Reeves, senior Elizabeth Salmon and senior Liana Guerra all made their presence known producing multiple highlight-reel kills and blocks. These plays produced the energy San Marcos needed to pull out the victory. Looking ahead to district play, Coach Ollett is looking towards her bench to make the plays necessary for success.

“I think we’ve had a lot of growth and I would like to see us be able to utilize our bench a little bit more by taking care of business and opening that up,” Ollett said. “I think the bench is getting stronger and (now they’re) able to (contribute more so our goal is to) just keep them all on the same page moving forward and fully trust each other.”

The Lady Rattlers will be back in action Sept. 20 inside the Snake Pit against Johnson City. The purple and white also begin play in District 27-6A next week, matching up with Schertz Clemens on Sept. 23 at 6:30 p.m.