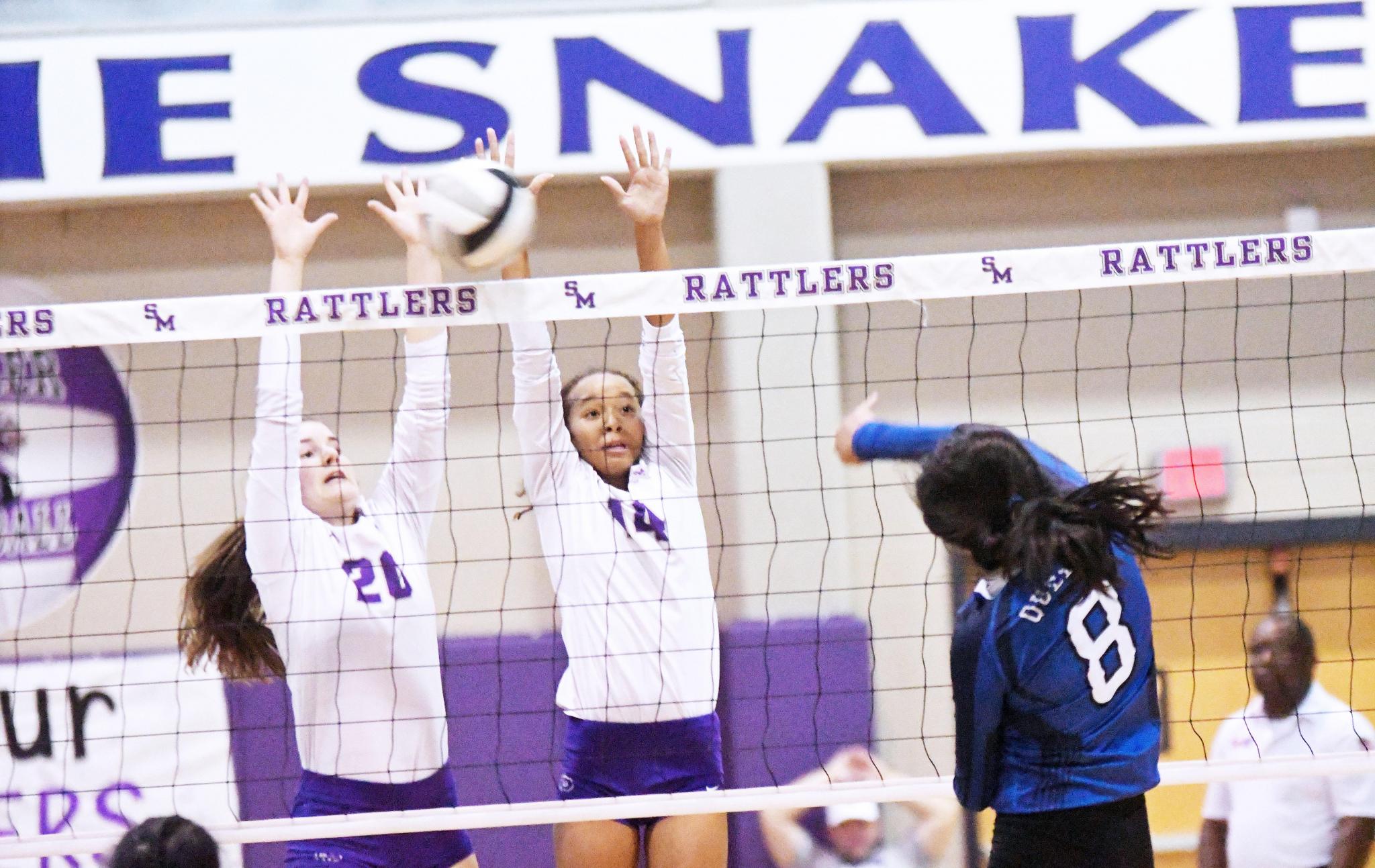 San Marcos went undefeated this week after beating Del Rio 3-1 in the Snake Pit, but it didn't come easy.

Friday night’s matchup was a scrappy one as both teams made multiple runs of four or more points while shutting out their opponent. The home team was able to keep the crowd engaged even with momentum swinging back and forth, boosting their energy up just enough to grab the win.

“It was head-to-head and I'm just really proud that the girls stayed on top. And even when we did fall behind, we kept composed and pursued every ball and worked through it,” head coach Michelle Moreno said. “A game like that is really good going into district. We knew Del Rio was going to be hustlers and competitors, so to see it head-to-head the entire game and see us finish on top is something to really be proud of.”

The connection between junior setter Julia Antu and junior outside hitter Layla Diaz picked up where it left off the last match early in the action. Antu put the ball right in Diaz’s sweet spot leading to the first of many kills on the night for the junior. As the score tugged back and forth between both teams, the purple and white found a way to create a little separation by sharpening their defense at the net. Back-to-back blocks from junior middle hitter Samantha Booth gave her team a 9-5 advantage before forcing Del Rio to call a timeout.

The visitors went on a 3-0 run out of the break but were halted by third-year outside hitter Riley Dow, who’s spike went directly to the left side of the court where no defender could get to it.

The Lady Rams wouldn’t allow a deficit to hurt their morale. As the tug of war for momentum kept each team within striking distance, costly defensive errors by the visitors set the senior captain and outside hitter Jordan Helbig up for the set-winning kill. San Marcos took the frame, 30-28.

Del Rio opened up set two 4-0, but the venomous snakes rattled back into it after completing plays with outstanding hustle and timely scoring. Diaz dove on the ground to save a ball off the net as Booth hit it in the air back to Diaz for the kill of the night. The crowd stood up and erupted in cheers.

A couple of defensive lapses from both teams kept each in position to win. With the score knotted up at 20, Booth blocked the ball right back at her opponents. The Lady Rams called another timeout. Antu passed the ball to Jordan Helbig, similiar to set one, who ended the set once again, 25-21.

The Lady Rattlers had won five consecutive sets until they dropped set three after jumping out to a 4-0 lead. Del Rio showed a lot of poise and resolved when trailing by four or more twice during the match. The team didn't gain their first lead of the set until about a quarter of the way through it, battling every step of the way.

Things started to pick up for the host with the stuck at 11-11. Olivo’s kill, which was originally called Del Rio’s point, was rescinded by the referee and awarded her team their 14th point of the set. Booth and Diaz both picked up a key block at the net, followed by senior defensive specialist Aubrey Reina’s perfectly placed ace, which pushed the home team’s lead back up to four.

Del Rio called timeout, then stormed back in front. Diaz spiked a ball into the net, ending the Lady Rattlers hopes of a sweep, 25-21.

The final set proved to be the best for the home team, as they never trailed during the action. Antu passed it up to Diaz, who’s kill electrified the crowd once again, leaving the scoreboard at 6-2. Immediately, she was back in the air for another kill.

“I get up so high it's to the point where you see the whole court, so you know where you want to angle it and you have the girls behind you calling what you want, so it's easier and it's thrilling and amazing,” Diaz said.

Up in the set 18-17, the Lady Rattlers scored four unanswered points before the other team could get a chance to get possession. Freshman middle blocker Liana Guerra received a ball that went straight into the air, while she came down with a fearsome strike that landed straight near the out of bounds line, pushing the team to set point. With hopes of grabbing their 14th win on the season, Jordan Helbig recorded her final kill on the night, ending the set 25-19 for the match win.

“Were on the road headed to San Antonio to play Macarthur, another tough team that were going to be facing on their court,” Moreno said. “We need that heading into district. (It’s) another tough competitor and we’re going to try to continue our momentum on the road and be ready and prepared for East Central next Friday.

The Lady Rattlers (14-16) will look to keep their streak alive when they travel to San Antonio, taking on the Macarthur Lady Brahmas (9-12) at 7 p.m. in their final non-district matchup of the season.