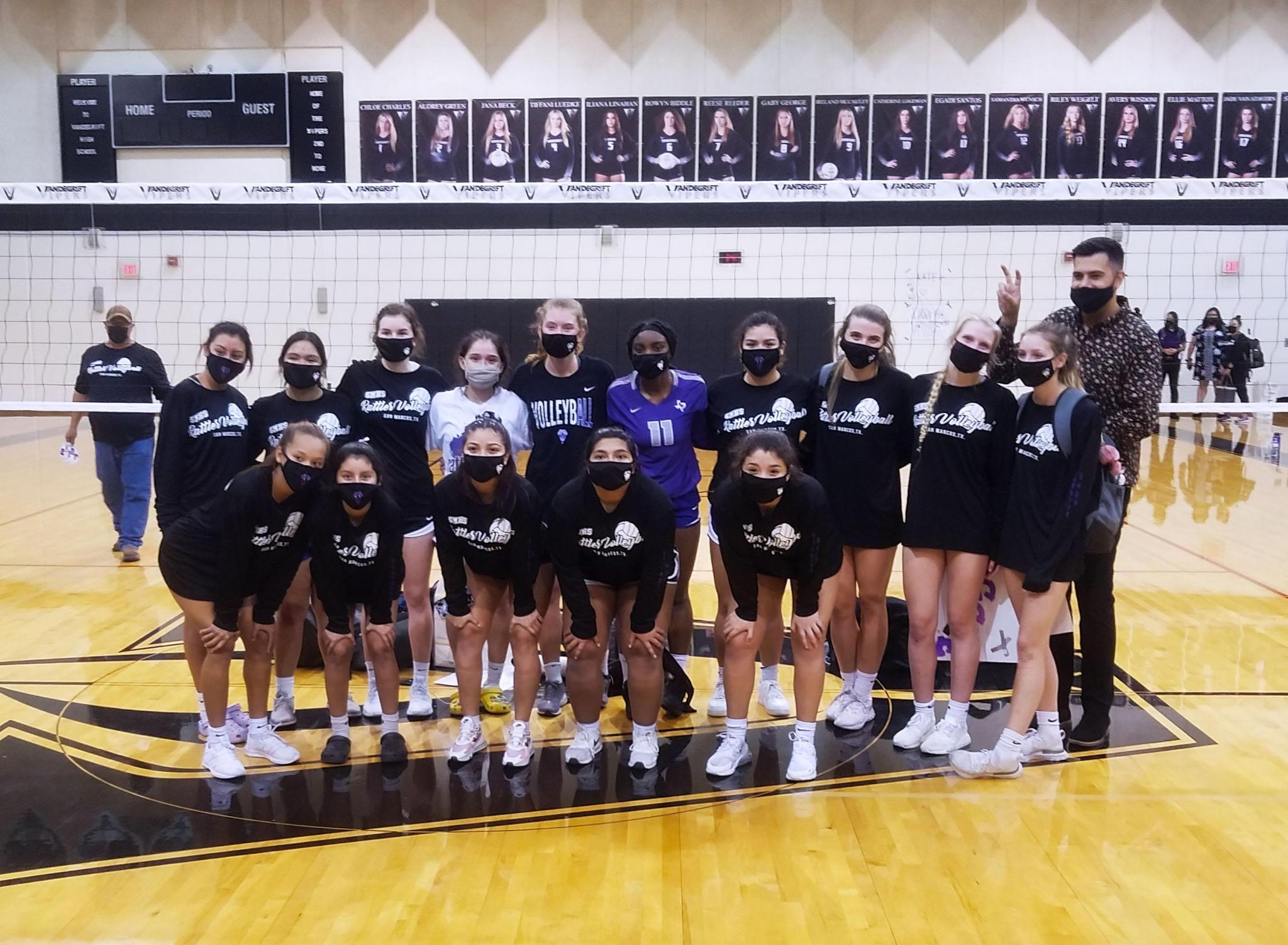 He donned a black button-down, black pants and black shoes. It’s a personal tradition for Te’o to wear dark clothes during the biggest games of his career — he doesn’t want you to see how much he’s sweating.

“A headache has never felt so good before,” he told his assistant coaches passing by in the Austin Vandegrift hallway.

The San Marcos head coach remembers evaluating his team after the first game of the 2020 season against Pflugerville Hendrickson and realizing his team had a fighting spirit but that they needed to work on fundamentals, increasing their skill and perfecting the X’s and O’s.

The coach told the Lady Rattlers their goal was to make the playoffs. Little did they know his goal was to actually win a playoff game. That’s exactly what San Marcos did when it knocked off District 25-6A champion Lady Vipers on the road Friday night, 3-1 (23-25, 27-25, 25-12, 27-25), securing the program’s first playoff win since 2001.

“I'm just so proud of them. I think they did exactly what we talked about. They made commitments in the locker before we went out and (I asked) ‘What’s something you can promise to do that you can control? You don't have to play well, but what can you promise to do?” Te'o said. “Almost unanimously, everybody said give a lot of energy and support their teammates. There were moments where we didn't but overall, as a whole, that was probably the best match we’ve ever had as far as supporting one another.”

No. 4 San Marcos takes down the No. 1 seed from 25-6A and advances to the second round of the playoffs.@smdrsports pic.twitter.com/CdTQH0tBci

A point of emphasis that’s been talked about in the Lady Rattler locker room has been women empowerment and supporting each of your teammates. Every rotation San Marcos (11-9, 8-6 district) made on the floor was indicative of the support the players have grown for each other over the season.

Junior outside hitter Maggie Walsh found success everywhere on the floor. A kill from her usual outside spot made the score 15-11 in the first set. Walsh then scored consecutive kills, which put the team up 22-20. Vandegrift (14-5, 11-3) recovered, though, going on to outscore San Marcos 5-1 and take a 25-23 first set win.

After playing a high-level first frame, fatigue started to catch up to the Lady Rattlers but they had bigger plans. They took a 24-19 lead late in the second set and seemed to have it put away until the Vipers went on a 5-0 run and tied the game. Senior outside hitter Layla Diaz scored on the next play, then the defense at the net for San Marcos showed up in the clutch with a block that secured the win 27-25.

Walsh admitted the team was fatigued but it didn’t matter.

“We did get tired but winning doesn’t care how tired you are. We had to push through,” Walsh said.

Junior middle blocker Emery Jones’ play continued to be a spark over the middle for her team and that’s why her coach believes in her ability. The empowerment doesn’t stop with Te’o. Senior libero Julia Antu and Jones keep each other confident.

“Coach Te’o pulled me aside at the beginning of the game and said ‘Make yourself available for (sophomore setter) Ruby (Gordon)’ — mostly staying away from the libero and just cutting around the blockers,” Jones said. “Julia and I also have this thing called our ‘confidence hat.’ So having that person to give you reassurance and confidence helps.”

Throughout the season, San Marcos hasn’t faced many middles their size or shorter. Jones took advantage of the matchup in the third set. After scoring twice, Jones came across the court, jumped off of her left leg and slammed the ball with her right hand, leaving the score at 16-9. The Lady Rattlers controlled the whole set and held Vandegrift to its lowest point total since Oct. 31, 25-12.

“I think some of these kids … they have a lot of skill but they just have never, I think, really believed in themselves or had someone kind of push them to that level,” Te’o explained. “I told Emery at one point. I remember pulling down my mask and saying ‘You're a really good player. Just go.’ And she was phenomenal. I knew she could do it and it was nice to see her on the biggest stage.”

The belief the ladies have in each other is what pushed them past the top team in the bi-district. After taking the No. 1 seed to extra points in the first set, players on the team voiced their confidence to each other.

“I felt like we let the first set slip away,” Walsh said. “But we knew if we just followed Coach Te’o’s game plan we would be fine.”

That mentally secured the final set, 27-25, and pushed San Marcos into the next round of the playoffs. The last time the Lady Rattlers won a playoff game, they went all the way to the 2001 4A Regional Finals.

With the win, San Marcos is slated to go up against San Antonio Reagan in the Area round of the playoff next week inside Virgil T Blossom Stadium.

“They're good,” Te’o said. “They've got two phenomenal pins. So you know, kind of the same mentality is we've got to serve tough, they're really well coached. But they're a great team. Like it's going to be, you know, tough, but I just would never count us out. Who knows.”