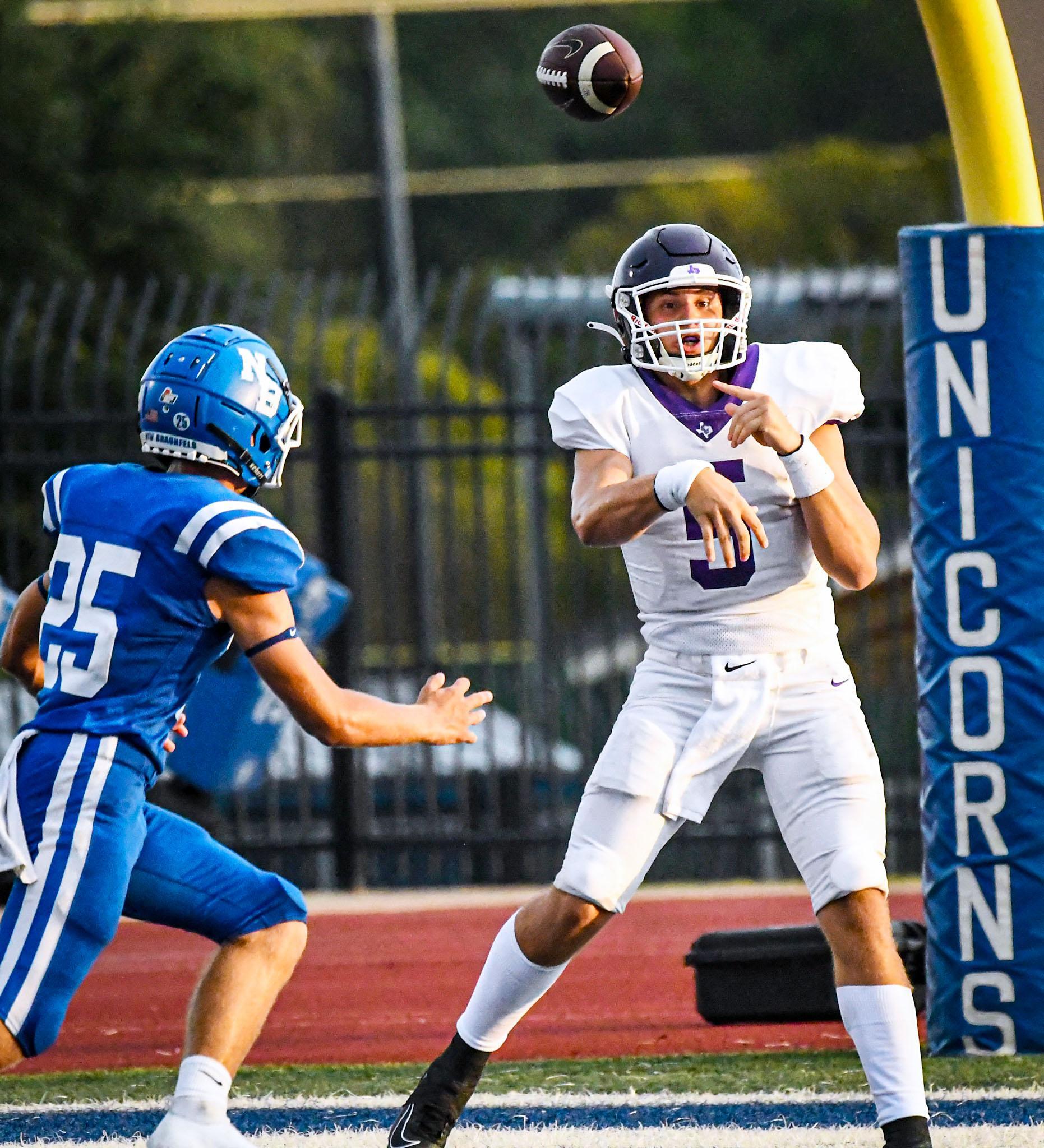 NEW BRAUNFELS — The damage the Rattlers took in their season opener was self-inflicted.

San Marcos traveled to Unicorn Stadium Friday night where it was tacked with seven first half penalties, resulting in a 49-30 loss to New Braunfels (1-0).

Head coach John Walsh and the staff talked about it in the locker room and took full responsibility for his team's first 24 minutes of the game. The mishaps included losing 79 yards to penalties alone in the first half.

“The only people that stopped us in the first half were ourselves. We were on the 2-yard line twice and didn't score a touchdown because of mental mistakes. I told them there's a difference between P.E. (classes) and lining up, playing backyard football and playing Texas high school football,” Walsh said. “In the first half, we looked like a football team in spurts. We were moving in chunks. I thought the second half, we came out and looked like a Texas high school football team on offense and moved the ball.”

The Rattlers came out filled with adrenaline and it oozed out on the first two drives of the game. Defensively, the team forced the hosts into a three-and-out, allowing the new-look Rattler offense onto the field. The purple and white flashed offensive explosiveness with a quick first-play strike from starting sophomore quarterback Isaiah DeLeon to senior wide receiver Jamill Gordon for 56 yards.

But even when they made plays, one mistake would stall most of the momentum. The first was by way of a pass interference call on 2nd and 1. However, San Marcos was able to recover and get into field goal range. Sophomore kicker Joseph Mendoza’s kick went straight through the uprights and gave San Marcos a 3-0 lead early in the first quarter.

New Braunfels responded by scoring on three of its next four drives before entering halftime with a 21-9 lead over the Rattlers.

“(I told them) ‘You need to prove to me we've made progress and how you do that, make it a one score game and make it a ball game,’” Walsh said. “And they did three times,”

The offense for San Marcos went full read option in the second half with 12 straight run plays, resulting in a 1-yard touchdown run by senior running back Kanui Guidry, cutting the Unicorn lead to 21-16. The drive ran off seven minutes of the clock.

From then on, New Braunfels would score on every possession for the rest of the game. Senior quarterback Aiden Baumann connected with sophomore wide receiver Lance Beeghley for the second time on a 14-yard touchdown, which left the score 28-16 with 11:18 left in the fourth.

The ground attack continued for San Marcos as Guidry broke free down the middle of the Unicorn line and scored from 64 yards out. From the 9:02 mark in the fourth to the end of the game, New Braunfels outscored the Rattlers, 21-7, and secured its first win of the season, 49-30.

A positive from the game is the big play ability of the offense. DeLeon finished throwing 7-17 with 243 passing yards and an interception and running 18 times for 130 yards and a touchdown. Guidry led the troops on the ground with 11 carries for 108 yards and two touchdowns. Gordon had three big plays for 120 receiving yards. The negative is the defense’s inability to come up with timely stops, as San Marcos cut the lead to a one score game three different times in the second half.

The Rattlers will get a chance to correct their mistakes next week against San Antonio Holmes on the road, playing the Huskies on Saturday at 7 p.m. Walsh has put the pressure on himself and the team by promising that San Marcos will get better and make the playoffs.

“We all want to win. But it didn't happen tonight,” Walsh said. “But we got a long season to make it happen. I told the team right there, ‘I will not let us not make the playoffs. I just won't do it.’”