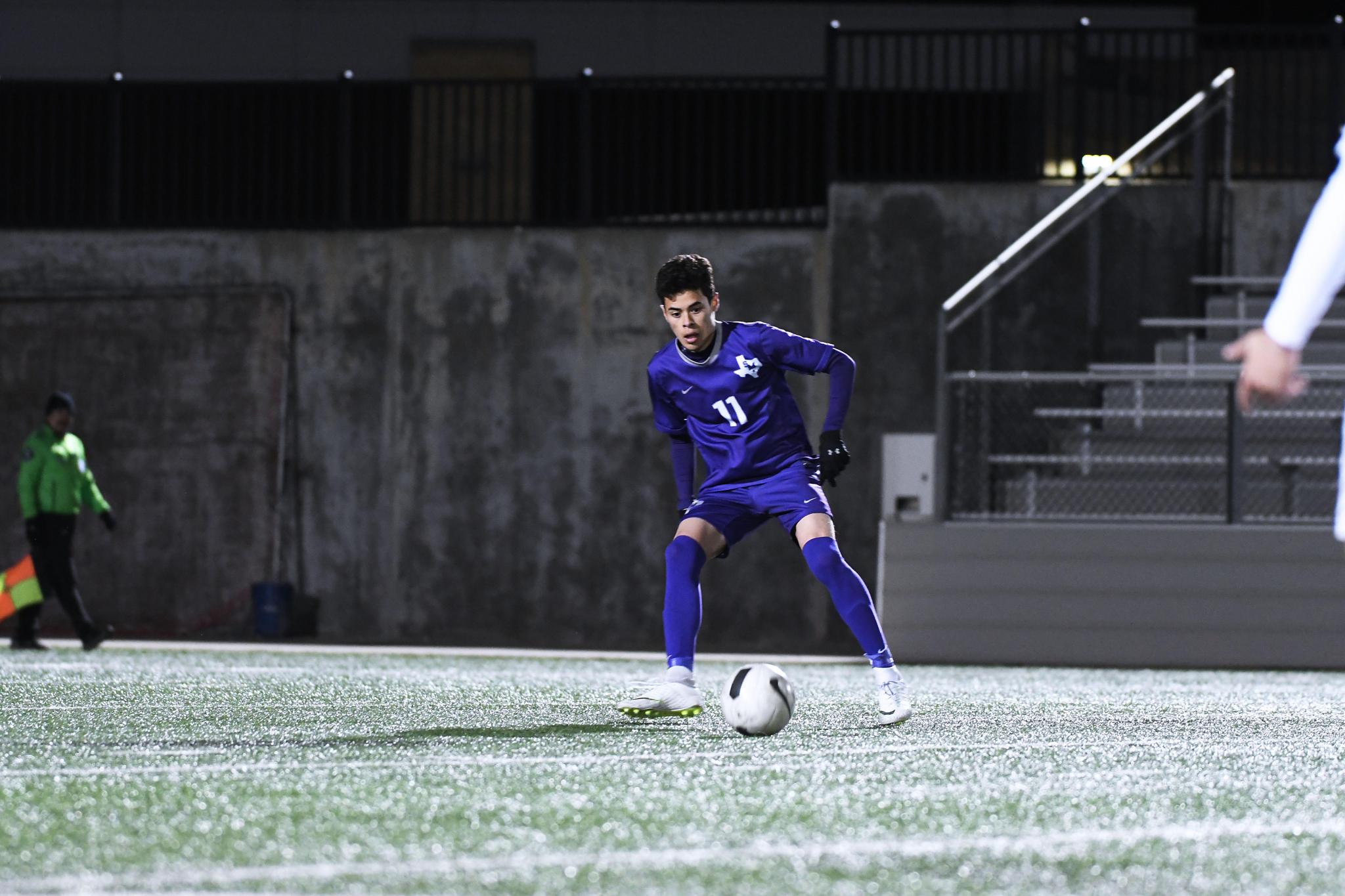 The final buzzer sounded and the Rattlers were crestfallen.

The scoreboard inside San Marcos Toyota Rattler Stadium showed San Marcos 3, Smithson Valley 3 – a valiant effort in the Rattlers’ final home game on Friday. But the hosts needed a win to keep their playoff hopes alive.

Sophomore Melvin Molina laid on the field for a bit after the clock reached zero. Head coach Lisa Mazur picked him up and put her arm around him as the two joined the rest of the team on the sideline.

“You have nothing to be ashamed of,” Mazur told her players.

San Marcos was aggressive throughout the first half of the match. Mazur had her players press up the pitch and told them not to shy away from contact, hoping to take the Rangers out of their game plan.

It worked well. Molina sent a shot from outside the box midway through the half and delivered it in the back of the net for the first goal of the game. He scored again just before the end of the period to give the Rattlers a 2-0 lead heading into the second.

But Smithson Valley matched the hosts’ physicality in the second half and got back into the match.

“They stepped up and we stepped up,” Mazur said. “I’m just so proud of (my team’s) effort.”

The visitors cut into the deficit eight minutes into the final half. The Rattlers answered immediately.

On the first possession after the goal, sophomore Giovanny Villareal made his way into the box and found Molina open again. Molina cashed in once more to make it a hat trick and give San Marcos a 3-1 lead with 31 minutes remaining.

The Rangers scored again a few minutes later, using a free kick to sneak in a shot that senior goalkeeper Terry Stennett nearly got to. They later equalized at the 24-minute mark.

San Marcos took one last shot with two minutes left on the clock. The ball rolled just left of the goal post. The match ended with a 3-3 draw.

“We were an inch away on the last shot,” Mazur said. “They played about as hard as they could play. I’m proud. This is definitely something to build on for the next game and the next season, even.”

Molina’s three goals give him 19 on the season and make him the leading scorer in 26-6A. Mazur’s been impressed by his development, as Molina had just one goal during preseason play this year.

“The guy’s been great all year,” Mazur said. “He came on fire in district play. On top of having skill, Melvin has heart, passion and a great work ethic which just elevates him.”

Friday’s match also marked the final home game for seniors Frankie Menchaca and Stennett. While the pair won’t be playing in the postseason, they will have one more game with their teammates as the Rattlers (8-11-2, 6-6-1 district) will travel to New Braunfels Canyon (12-3-6, 9-1-3) on March 22 to face to Cougars at 7:15 p.m. in the regular season finale.

“(Our seniors have) great leadership,” Mazur said. “Terry Stennett in goal has been great for us, really solid play. I think he’s won a few games for us with his flying saves. And Frankie’s just that veteran on the side that works hard. So, I’m just very proud of them … We want to get the last win.”