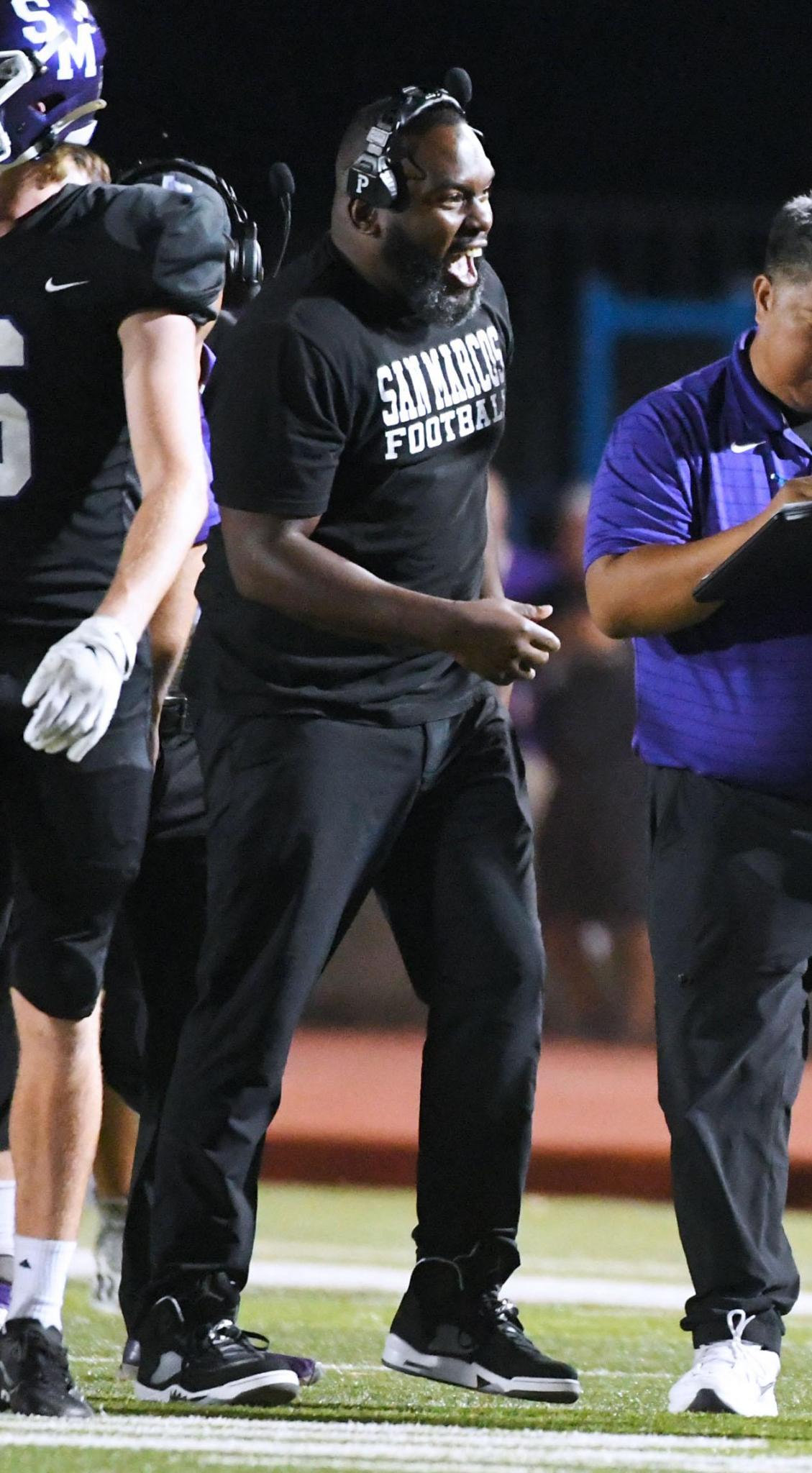 San Marcos co-offensive coordinator Marvin Nash considers himself to have a servant’s heart. It was passed down to him by his mother, Annette Nash-O’Neal, who Nash said taught him to always show kindness and respect.

So when Nash was asked in early 2020 to be profiled for a book focusing on high school coaches across the country, Nash was happy to oblige.

“It’s humbling because it’s just what I’ve always done my entire career,” Nash said. “And that is just build meaningful relationships and authentic relationships, no matter who it is.”

Davis came up with the idea of the book based on his son’s relationship with his coaches in Fredericksburg, Va. Davis described his son as a “gifted athlete,” but one that struggled in the classroom. His coaches were a lifeline — someone other than his parents who could help him stay disciplined.

Davis’ son graduated from Riverbend High School and went on to join the Marine Corps. The school hired a new head football coach a year later, Nathan Yates. Davis joined Yates’ staff as a special teams coach and learned how Yates approached building relationships with his athletes and helping them build a life beyond football. Davis began writing down some of Yates’ stories, which became the basis of his book and inspired him to reach out to other high school coaches.

“There’s so many stories out there, but they’re told locally,” Davis said. “And local newspapers do a good job covering these people. But if you look nationally, there’s a lot of writing about youth coaches, there’s a ton of writing about college coaches — there’s very little about high school coaches. So that’s why I thought ‘Well, let’s see if there’s something to write.’”

Davis began contacting coaches associations in different states explaining what he was wanting to do and asking for names to connect with. He ended up interviewing over 130 coaches.

One of them was Marvin Nash. Davis was compelled by Nash’s background — how Nash was raised by a single mother, how he lost his job in the mortgage industry in 2007 and turned to coaching at Crownover Middle School in Denton under athletic director John Walsh, who Nash now coaches for in San Marcos. But Davis was also intrigued by how Nash seemed to be an “anti-coach’s coach,” bucking conventional norms of how the job should be done.

“It’s almost like he does everything backwards,” Davis said. “So for example, you know, when he talks about what he does on Friday nights. When things are just going wrong, most coaches, including me, are usually going nuts on the sidelines, right? That’s when the screaming starts and the frustration. And he’s just like, ‘That’s when I teach. That’s my time to teach,’ he’s so calm. And when things go well, he’s just a maniac. He’s jumping around, screaming. It’s the antithesis of what most coaches do.”

Nash discusses other parts of his coaching philosophy in the book, such as how he institutes a mandatory 3.0 GPA minimum for athletes to play for him, and details how he developed his voice as a coach, which Nash calls his most powerful tool.

“You lead by example, you always work hard, but you always make sure everyone knows that their voice is heard. And you don’t know that without knowing everybody by name and by need,” Nash said. “So you know who they are and you know exactly what they need because you’re listening. You’re not just going through life thinking that nothing else matters. You listen to what the others that you’re there to serve actually require, and you give them that and more.

“I guess I’ve been labeled as a ‘player’s coach’ because my players always loved me, but it’s because I love them. And I think you can’t be a good coach unless you know what someone needs. You’re able to do what it takes to help them be successful … (If you’re not) trying to figure it out, then you’re not coaching. You’re just a guy that coaches the game.”

“Thirty Days with America’s High School Coaches” goes on sale to the public on Jan. 25 and will be available in paperback, hardcover and eBook formats.