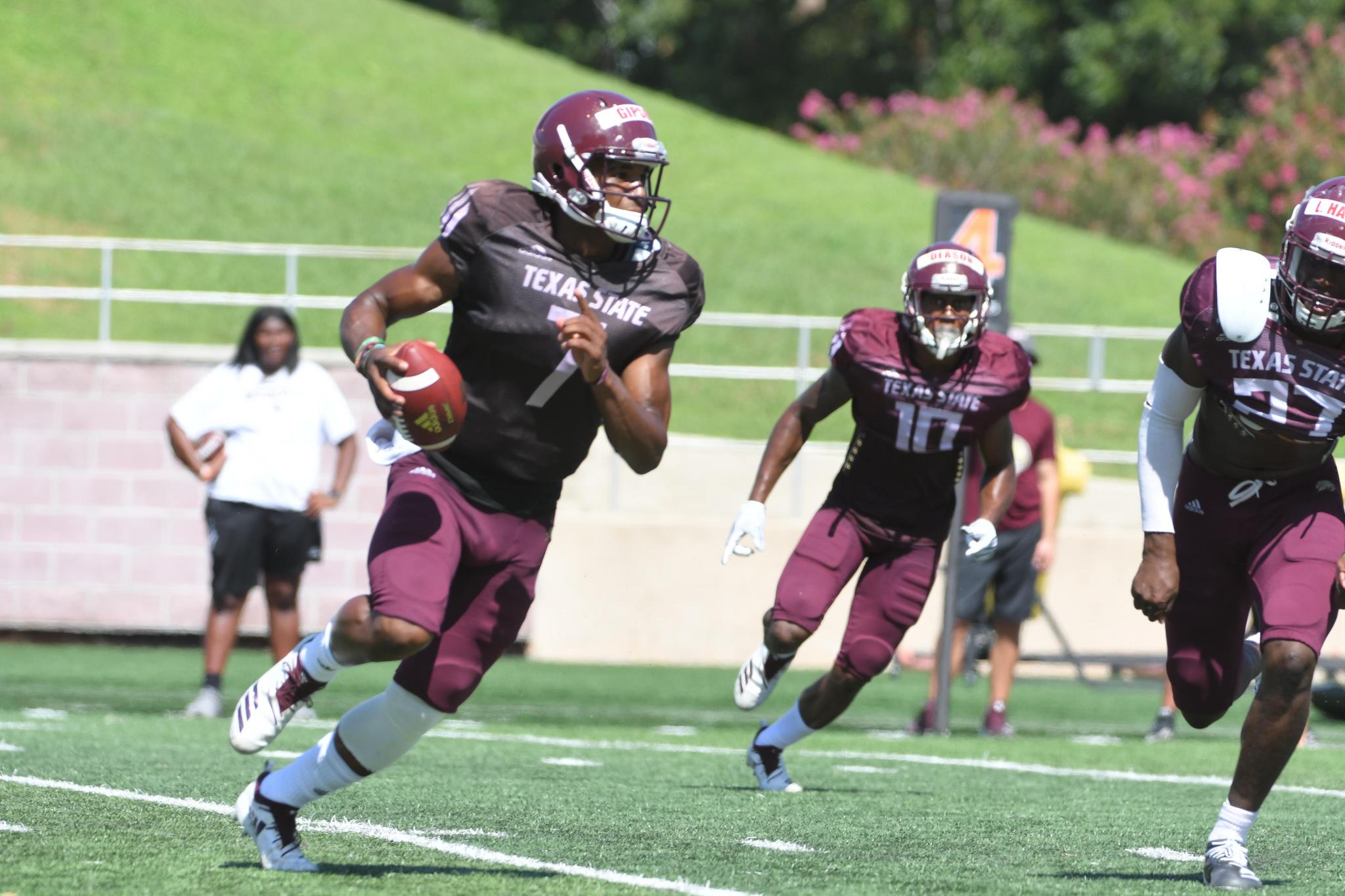 Odd Man Out: Jaylen Gipson still searching for his role at Texas State

Texas State’s quarterback battle was a three-man race for most of the offseason — until it wasn’t. Following the team’s intrasquad scrimmage on Aug. 10, head coach Jake Spavital and offensive coordinator Bob Stitt informed Gipson he was no longer in consideration for the starting job.

“To be fair to whoever's going to be the guy against (Texas) A&M, we need to get more reps to a couple guys,” Stitt said on Wednesday. “So we cut down everybody else and we're letting (Tyler) Vitt and (Gresch) Jensen take all the reps, one or two, and they just rotate between the first team and the second team, getting a ton more reps. And we need to do that and that will enable both of those kids to be prepared when we do make the decision of who's going to start.”

Gipson said he wasn’t told specifically what he was lacking or could improve on. He acknowledged he had the least in-game experience among the three signal-callers.

But it’s difficult to gain playing experience when no one will let you play.

The three-star recruit from Mexia committed to the Bobcats during his senior season with the Black Cats on Oct. 26, 2016 and signed his letter of intent on Feb. 1, 2017. The 6-foot-2 quarterback sat out his first year in San Marcos as a redshirt. He saw action in five games last year as a backup, completing 3-of-6 passes for 12 yards.

Spavital’s arrival gave Gipson a fresh start. The head coach didn’t want to rule anyone out while determining which quarterback best fit his system, and Gipson’s ability to deliver the deep ball and extend plays with his feet made him an intriguing option.

Gipson felt he was well-suited to Spavital’s offensive scheme and liked the challenge of vying for the starting spot.

“Some people run from it, but I love it. And every quarterback in that room loves it, too,” Gipson said at Texas State’s media day on Aug. 4. “We're all super competitive and, day-in-day-out, we come in and we have fun with it. But it's so competitive, even from like just watching film together or out on the field, practices. We're all trying to compete and that's what makes a team good ... because it makes each player better, too.”

Spavital ultimately went in another direction. But Gipson doesn’t want to watch another season unfold from the sidelines. When told he would see reps cut down at quarterback, Gipson told his coaches not to hesitate trying him out at other positions.

“I feel like I've been here for three years and haven't really done anything, haven't really produced for this team,” Gipson said Wednesday. “And I just got to the point where like, ‘Hey, if I can't play quarterback, let me go make plays for this team.’”

Spavital and Stitt haven’t ruled out the idea. Spavital likened the situation Braxton Miller in 2015, when the former Ohio State signal-caller dropped out of the Buckeyes’ quarterback competition to transition to wide receiver. Miller went on to caught 26 passes for 341 yards and three touchdowns that year.

“(Miller) was at H-back and moving in the backfield, moving out and kind of all over the place,” Spavital said. “You know, I haven't really thought about (Gipson) on defense. If I brought that up to the defense, they'd probably try to steal him over to that side. So let's keep him on the offense right now.”

The coaches plan to test Gipson at a few different spots ahead of the team’s season opener against the Aggies on Aug. 29 at 7:30 p.m. But he is still the team’s third-string quarterback and will mainly continue training to do so.

Gipson remains optimistic. Spavital noted his body language hasn’t changed. He’s still practicing as hard as ever and knows there’s still a chance he could line up behind center at some point this year.

It just won’t be day one at Kyle Field. And as a competitor, it’s not an easy pill to swallow.

“He's still one snap away from being the guy, you know, to be in the mix as the backup,” Spavital said. “(Gipson) handled it really well. You know, those are the types of kids that you love coaching because they have a chip on their shoulder and they understand it's a competition, but they're not going to give up on themselves. They're going to bring it again.

“We're going to eventually find a role for Jaylen.”