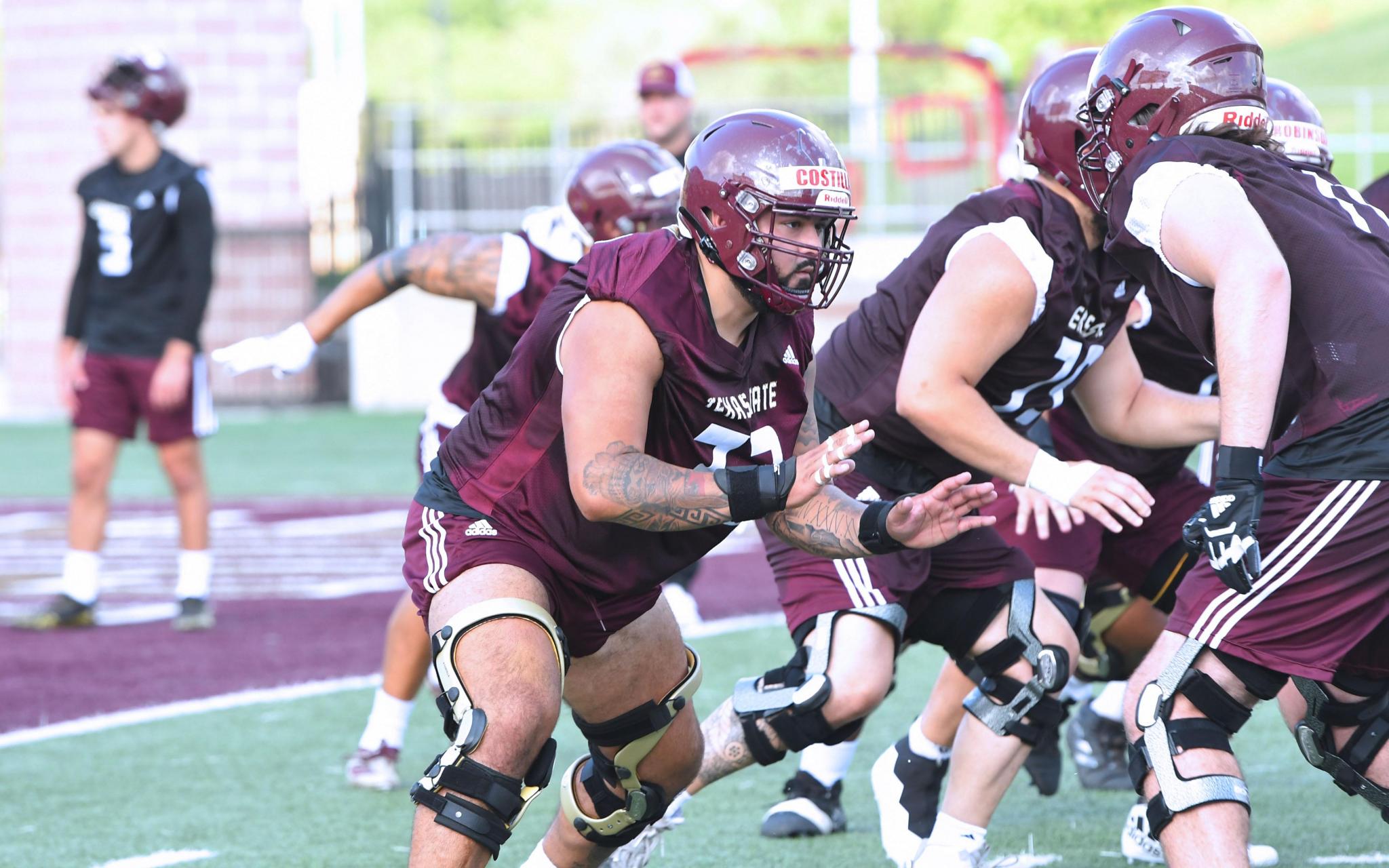 The Bobcat offensive lineman tore his ACL midway through his senior season at San Marcos in 2017, derailing almost all of his potential scholarship offers and interest from FBS and FCS programs. On top of that, Costilla found out about the birth of his first child around the same time.

“(2017-18) was one of my hardest years,” Costilla said. “A lot of people don’t know that, but week four against William Howard Taft I tore my ACL. Alongside that, (my girlfriend and I) found out we were having a baby. So there was a lot going into that — having football taken away from me, not being able to play (in San Marcos’ 2017 playoff season), dealing with a knee injury, getting my offers pulled and then having to take the JUCO route — it was challenging.

“It really made me look at everything from a different perspective. Seeing it’s not just about me. Now I have to use my abilities and my body not just to get a degree in a way, but (to) make sure that I do everything right to make sure not only (myself) is taken care of but (my girlfriend) and my child are taken care of.”

For an 18-year-old fresh out of high school, the task of finding a college to give you an opportunity after a recent ACL tear as a lineman isn’t the easiest. Costilla at least had his coaches to help him with that. But for everything else around him, it was a confusing time for a young man trying to figure out fatherhood, school and recovery.

“(The hardest part about that time was) being so young and everyone telling you what to do. But at the end of the day, it’s kind of just you. I’ve noticed people tell you ‘oh do this, do that,’ but at the end of the day, only a select few people really understand you and have you. I had so much coming in (and) going out and it was more so just the struggle of getting ready for newborn, graduating high school, working on my knee (and) applying to all the different junior colleges. There (were) a few challenges.”

Costilla ended up landing at Tyler Junior College (TJC), a school that’s been home to many talented athletes who didn’t have a linear path to NCAA Division I athletics. The school’s most notable alumnus is Miami Heat basketball star Jimmy Butler, but the football program at TJC has a long history of producing NFL talent.

For Costilla though, what stood out about TJC was the way the coaching staff treated him as a person as well as the location.

“(Assistant coach) Matt Gordon (is the reason I went to TJC). Matt Gordon’s a really good man. When he and coach Rocco recruited me, I really clicked with Gordon. He was my O-Line coach there the first year, then he ended up going back to defense. Just the way he was as a person (really impacted me). I felt like Tyler was really the best place at the time for us to be instead of Trinity Valley, Kilgore, Navarro, (or) like Corsicana. I didn’t feel like those were the best places to have my girlfriend and my baby at the time.”

After two years at TJC, Costilla was ready to make the move back to D-I athletics. Costilla had offers from the likes of SMU, Middle Tennessee State, Louisiana and Arkansas State, but ultimately decided to come back to San Marcos and committed to Texas State on Aug. 17, 2019.

“Ultimately, when I committed here to Texas State — I know I’m supposed to say something along the lines like I felt (the) growth or something — but I came here to be closer to my family,” Costilla said. “I came here to be a father. I came here to make sure her and my baby were taken care of. (Texas State) knew that. (Former offensive line coach Clay) Maguire knew that, he took full advantage of that. But (it) worked out. I’ve always been a firm believer that everything works out for a reason.

“So I mean, it didn’t work out the first two years. I struggled a little bit, but look where we are now. I’ve seen tremendous growth in (myself). (I) love the team, there’s huge culture change and everything but ultimately I came here out of JUCO for (my family).”

Costilla is going into his third season at Texas State, but it’ll be his first year using any eligibility. Costilla came in during 2020, so his eligibility wasn’t used that season. Last year, Costilla broke his hand during the season and redshirted the rest after playing in two games.

Despite the adversity, Costilla has continued to progress since stepping on campus in August of 2020.

“(Over the past two years my biggest area of growth has been) my attitude,” Costilla said. “I came in and — not gonna lie — I was a hothead, I had a bad attitude. I didn’t really click with coach Maguire, we butted heads a little bit. So I didn’t play the rest of the year, obviously. Once he left, (former offensive line coach Jim) Turner came in (and) I had some off-the-field issues, (then) ended up breaking my hand. (But) then I really connected to (offensive line coach Brian Hamilton).

“I like him a lot. I see that he actually cares about me as a person more so (than) as a player. So he gets my full respect. (I like the) way he breaks down the game. I feel like (with) changing my attitude towards him, the coaches and then me personally, I’ve seen what I need to do (and have started) taking accountability for it.”

Costilla finally feels like he’s at a solid place relationship-wise with the staff and mentally with himself heading into 2022. He’s looking to keep doing the right things to keep him in that space throughout the year and the rest of his eligibility.

“(Keeping those issues off the field) will definitely help a lot. It (already) has, coach Ham’s been helping me with that. So that’s been good, that’s why I had a really good spring once my hand was healed. I find myself up here just lifting more and just being around the guys a lot more too. I mean, once you have a clear head and you find your right mindset and attitude, it makes everything a whole lot easier.”

Costilla has also seen a change in the feel around the Texas State locker room — one that’s coincided with his change as well.

“I feel like we’ve all taken a different approach in a way,” Costilla said. “(We’re) up here more, watching more film, doing more meetings, but that’s like all on our own. Like, (head coach Jake Spavital is) pretty much kicking us out of here all the time because we’re always in the weight room. We’re always just watching film, trying to study and get better because we know how good we can be. But at the end of the day we always just shoot ourselves in the foot in a way.

“But now going into (the season) we haven’t taken steps back. We’ve just been stacking days like (the coaches) say, but no (we’re) up here watching film, hanging out (and) doing a lot more stuff together. So we’re a lot closer and we hold each other a lot more accountable.”

Regarding the offensive line group, Costilla’s excited for the depth the room has acquired with the additions of redshirt senior Richard West, and redshirt juniors Evan Lovell and Kyle Hergel. For the returners, Costilla’s excited about the amount of experience the Bobcats will bring back on the interior.

Looking forward to the upcoming 2022 season, Costilla describes his play style as “nasty,” and looks up to New Orleans Saints first-round pick Trevor Penning when it comes to being mean (against his opponents) on the field. When it comes to the Bobcats as a whole in 2022, Costilla’s answer to what their goals are is simple — they want respect.

“(I want to get) respect (out of this season), not only for me (and) my team, but for coach Spav,” Costilla said. “Like, there’s so much he does for us. He takes care of us and he does (a lot) behind the scenes. I want respect for this place.”