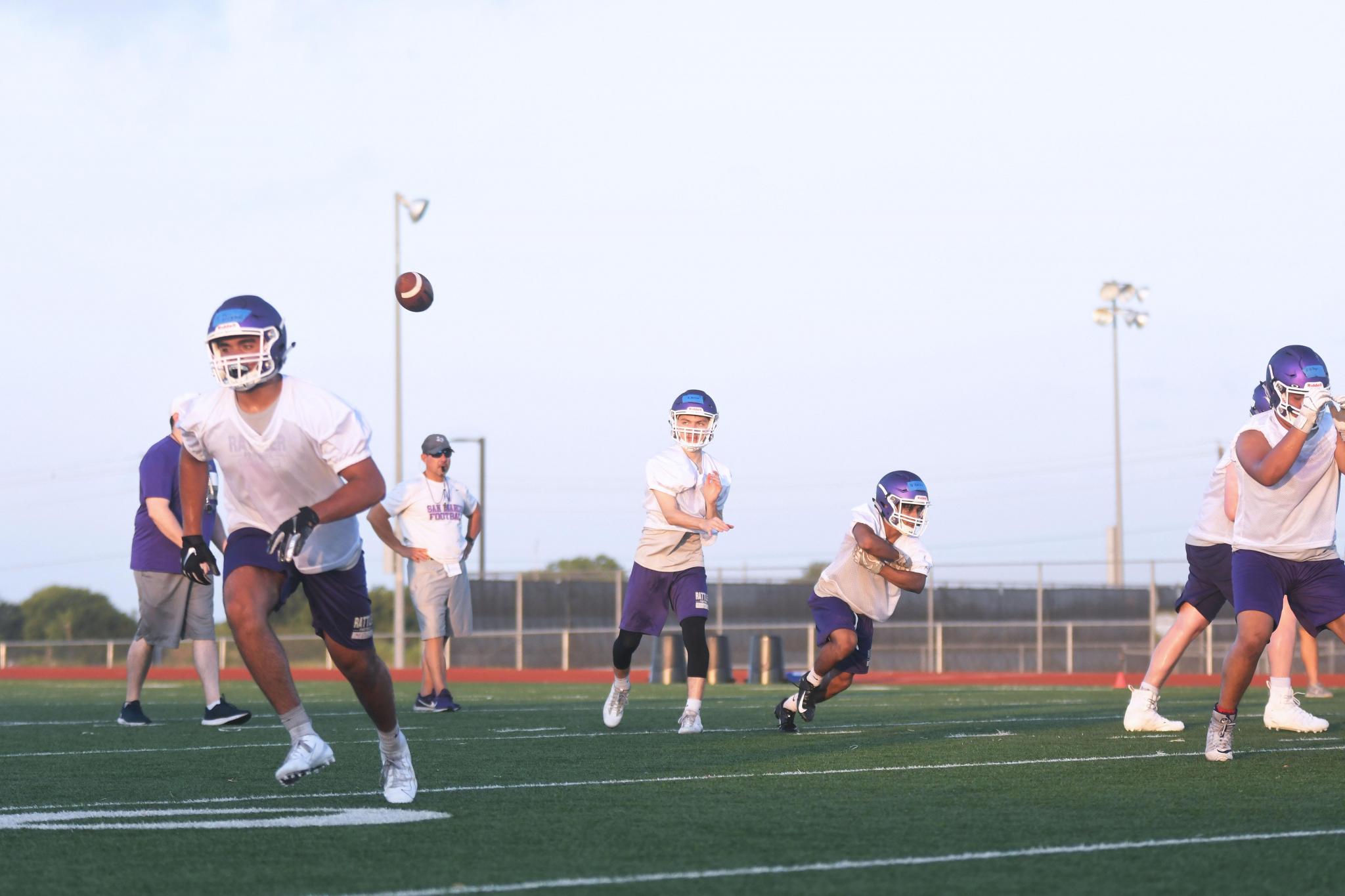 San Marcos is getting back into football shape as the 2019 season quickly approaches. But more important to head coach Mark Soto, the Rattlers are growing closer together.

Check out the players’ Twitter accounts and there are photos of the Rattlers bonding around the lunch table at various restaurants around town. Sure, San Marcos’ motto this season is ‘Defend SM,’ but Soto jokes that the team is ‘Eating SM.’

“We’ve had a great fall camp,” Soto said. “For two weeks straight, we've been (practicing) early in the morning. The committed have been here. Attendance has been great — Six o'clock in the morning for two weeks straight is tough to do for a teenager. And you could tell they were growing together on Twitter feeds because they were all going to eat at different restaurants together. They were defending SM all over the place. I told them, ‘they're eating SM.’ But that was good to see. So they've definitely grown closer together.”

Soto said the bond the Rattlers are establishing is the most important thing that’s happened during fall camp.

“I feel like that'll help them,” Soto said. “(The bond is) probably the most important thing. I think it's the glue that holds everything together. You will do more for someone that you love than you’ll do for yourself most of the time. So when these guys are hanging out, taking care of each other, giving each other rides, you know, worried about each other when they get injured that shows me that the bond is being built in that they're going to be lifelong friends, No. 1. And two, they're going to play harder for each other because they don't want each other to fail.”

San Marcos gets to face an opponent Friday as it takes on San Antonio Holmes in its only scrimmage of the season. Soto and the Rattler coaching staff want to use the scrimmage to fine tune things.

“It's all about just fine tuning the Xs and Os and seeing what this team is going to be good at and eliminating what they're not going to be good at,” Soto said. “Defensively, we want to run to the ball and we want to hit it ferociously. I want hats to the ball. Offensively, we want to execute with limited mistakes — people in the right places, at the right times doing their job as (New England Patriots head coach Bill) Belichick would say. But those are the two things we're looking for.”

Soto said Holmes will provide a good test for the Rattlers.

“Holmes is always going to come out and battle,” Soto said. “You know, they look like us. They're same size, same speed. So It's a good starting point for us. They are very proud football players over there and they have a coaching staff that has a lot of knowledge and get their kids to play hard. So I think it'll be a slugfest to tell you the truth. They're going to be, you know, three yards and a cloud of dust and then all of a sudden the ball in the air. They'll have their ups and their downs and it's just going to be a seesaw battle back and forth.”

San Marcos’ scrimmage begins with the junior varsity teams playing at 9 a.m. The varsity Rattlers are scheduled to take the field at 10 a.m. inside San Marcos Toyota Rattler Stadium.

San Marcos will host a Meet The Rattlers rally later that night, starting at 7 p.m. at the stadium.