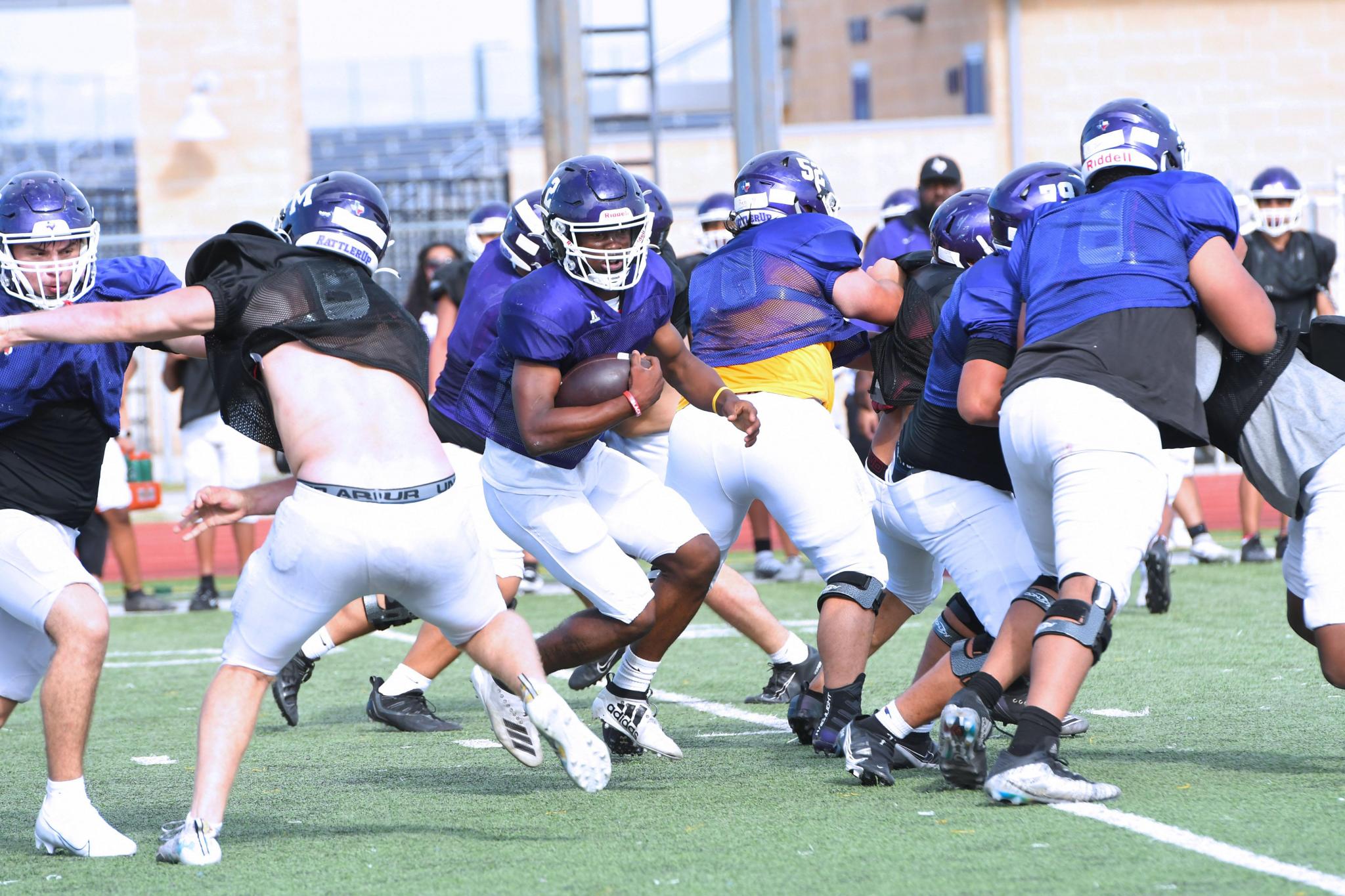 Spring is for fine-tuning what works.

San Marcos head coach John Walsh is known for his team’s presence on the offensive side of the ball, with his athletic quarterback and running backs finding space in gaps while they pick up yards all over the field. But you can’t do that without blocking the 11 players on defense chasing the one ball. The first line of defense has to be precise. The linemen up front play a vital part in the success of Walsh’s teams, too.

Although San Marcos graduates a couple of players from the O-line, the unit may have gotten even bigger, which bodes well for the running Rattlers in their new district. They also may have found a gem in San Marcos, which college coaches are starting to take note of.

“Length wins,” Walsh said. “When you can make that length have good technique, and they can get strong, which we are headed in all those directions, it makes for a good offensive line. We like to run the football here, and we gotta protect what we gotta protect. So any team I coach, we’re going to be leaning on that offensive line.”

Last season, Walsh’s line was good enough to aid the team to a 3,283-rushing yard, 37-rushing touchdown season, averaging 7.3 yards per carry. While a lot of the production is due to the speed and flash of senior running back Jaidyn Brown in the backfield, the line did its job opening holes for him, propelling San Marcos to a playoff appearance for the first time in four years. If the Rattlers want the same success, the line will have to maintain that level of production all season.

Williams is finding his niche in the offense along with the beefed-up line his skill position players like seniors Jaidyn Brown and Isaiah DeLeon will follow behind for touchdowns on Friday nights.

“That just really shows that size matters,” Williams said of his offers. “I just gotta do like what Coach Walsh said to: Live up to the hype. Be big. And weight and strength wins.”

It’s a pretty unique story, but Walsh has seen players get college exposure without taking a snap on varsity before. Noah Cain, now a running back at LSU, and Eli Stowers, now a quarterback at Texas A&M, both received offers without playing time at the highest level in high school. Both lived up to the hype, and Williams has the potential to do the same.

“So the piece I’m used to is those two guys, what they did was live up to the hype,” Walsh said. “They led us deep into the playoffs and they lived up to the hype. When you get that kind of attention and those offers, there’s no pressure other than for you to take care of your team where you’re at. And the pressure for Ory is to be the best player at San Marcos and if he does that, everything else takes care of itself.”

Other than Williams, the San Marcos line displays more size such as 6-foot-6, 300-pound junior offensive tackle Brenden Jones, who holds an offer from Lane College. The size hasn’t scared the defense of the purple and white in the spring season, though, as competition between both sides of the ball are starting to make each other work a little harder — a positive for the coaching staff.

“It wouldn’t be good for me as a head coach if one side dominated,” Walsh said. “We’re not doing that, it’s back and forth. The defense is starting to hone in because they’re seeing the same thing over and over again, and I’d be disappointed if it didn’t hone in on us.”