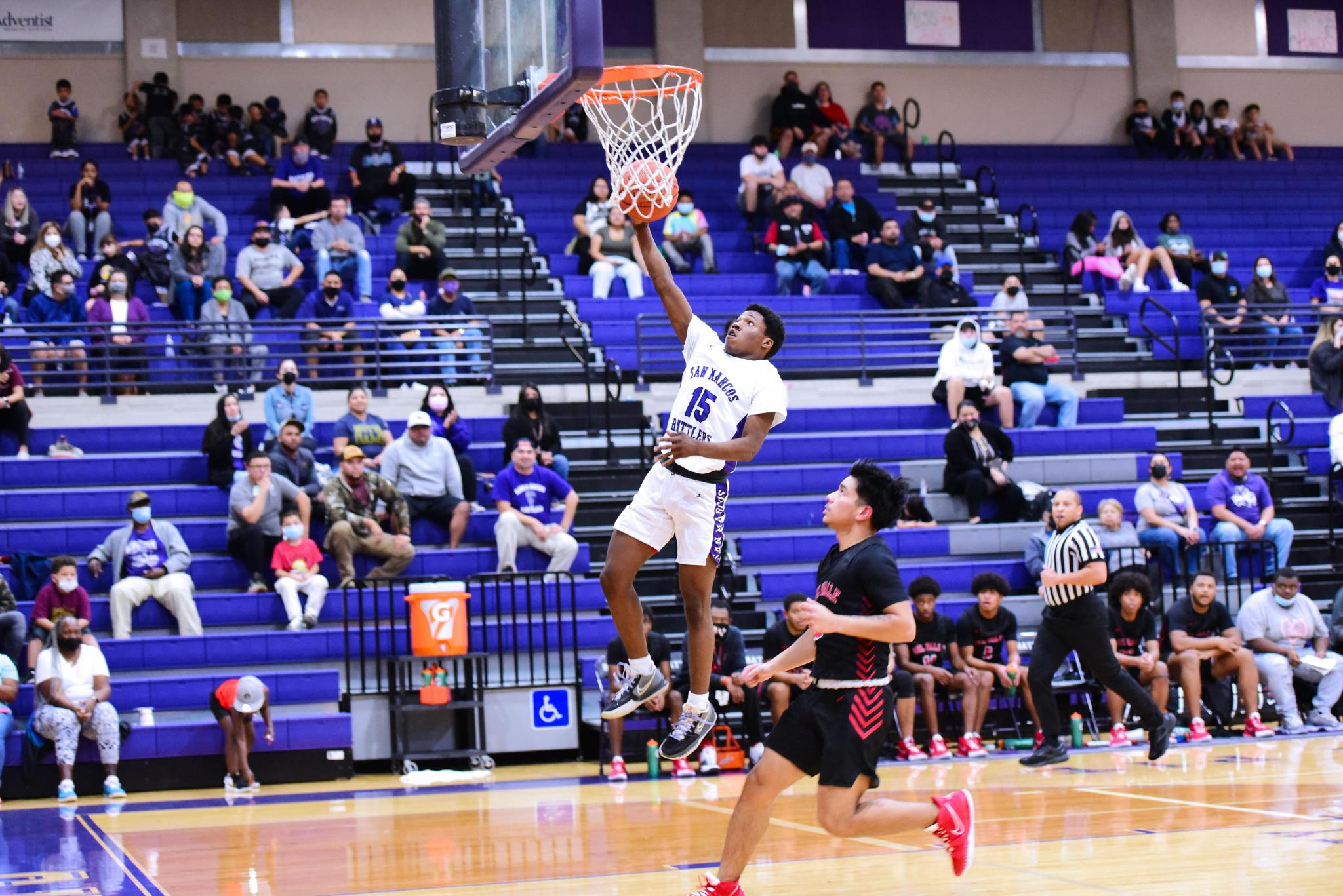 San Marcos went through a valuable test of adversity Tuesday night inside the Snake Pit.

The Rattlers dropped their third game in District 26-6A to Del Valle in overtime, 68-66. In lieu of Kaden Gumbs fouling out late in the fourth quarter, guard Damarion Williams’ offensive onslaught was too much for the purple and white to overcome after regulation. Four-star forward Malik Presley contributed 31 points throughout the night, including six points in overtime.

“Hats off to Del Valle and No. 4 (Williams), he played a great game and they played a great game, (and) just made one more play than us,” head coach Dan Miller said. “It's frustrating to be in this spot, but at the end of the day, it's something we have to learn from. You know, we're not going to win our district. Westlake is going to win our district. We're going to get into the playoffs and we have to learn from this because that's a playoff atmosphere and we have to make those plays down the stretch.

“So we gained a lot of experience from it. Unfortunately, we were on the wrong end of it, but the important thing is just to stay together and believe in each other and get back to practice tomorrow.”

While the majority of the game saw both teams staying within five points of each other, San Marcos (24-8, 7-3 district) extended its lead at the end of the first half to 10, applying defensive pressure and creating opportunities in transition. The purple and white kept that pace to start the second half, extending the lead to 11 midway through the third quarter.

The run forced Del Valle (16-6, 5-5) to call timeout, which was the point in the game where the momentum shifted. Williams came out of the timeout and hit 3s on consecutive possessions to insert the Cardinals right back into the game. Miller believes his squad made some mistakes during that time of the game that could’ve been avoided.

“Carelessness (was common) at times tonight. You know, we started the game that way, we had some fast breaks (where) we kind of forced some tough shots,” Miller said. “We threw the ball into the stands, I think, three times tonight — live ball turnovers a couple of times that took place. (And we hold ourselves to) championship standards, (and) we gotta be focused. So it’s just such a learning experience.”

Foul trouble was another issue that haunted the Rattlers throughout the game, but also led to valuable experience for freshman guard Cash Good and sophomore guard Zyair Jolivette. While coaches ideally want to bring their young players along slowly, Miller believes playing minutes in situations like these, and even making mistakes, will pay dividends come playoff time.

At one point in the fourth quarter, Gumbs encouraged his teammates to “stay locked in'' on the court, which was another point of emphasis for Miller examining this matchup.

“(Staying mentally strong in close games) is extremely important. We're out there with almost all juniors, a freshman, a sophomore at times, and one senior on the court in Caleb (Williams),” Miller said. “But it's experience that our guys needed. They hadn't been in the playoffs last year, they didn't play in those games — and we've had that experience this year, playing some tournament championships and things — but we just didn't get it done tonight. We can't make excuses, we can't blame others. And what teams that don't make playoff runs do is they listen to the negativity and they focus in on that or they point fingers.

“And that's what we're going to stay away from. You know, our championship standards are ‘We're going to own it.’ We didn't get it done tonight. We're going to get back to practice. We have a good Bowie team coming in here on Friday night and we gotta be ready to make the plays to win the game.”

San Marcos will return to the Snake Pit Friday night looking to bounce back and complete their third sweep of the year in District 26-6A against Austin Bowie (13-15, 5-5).