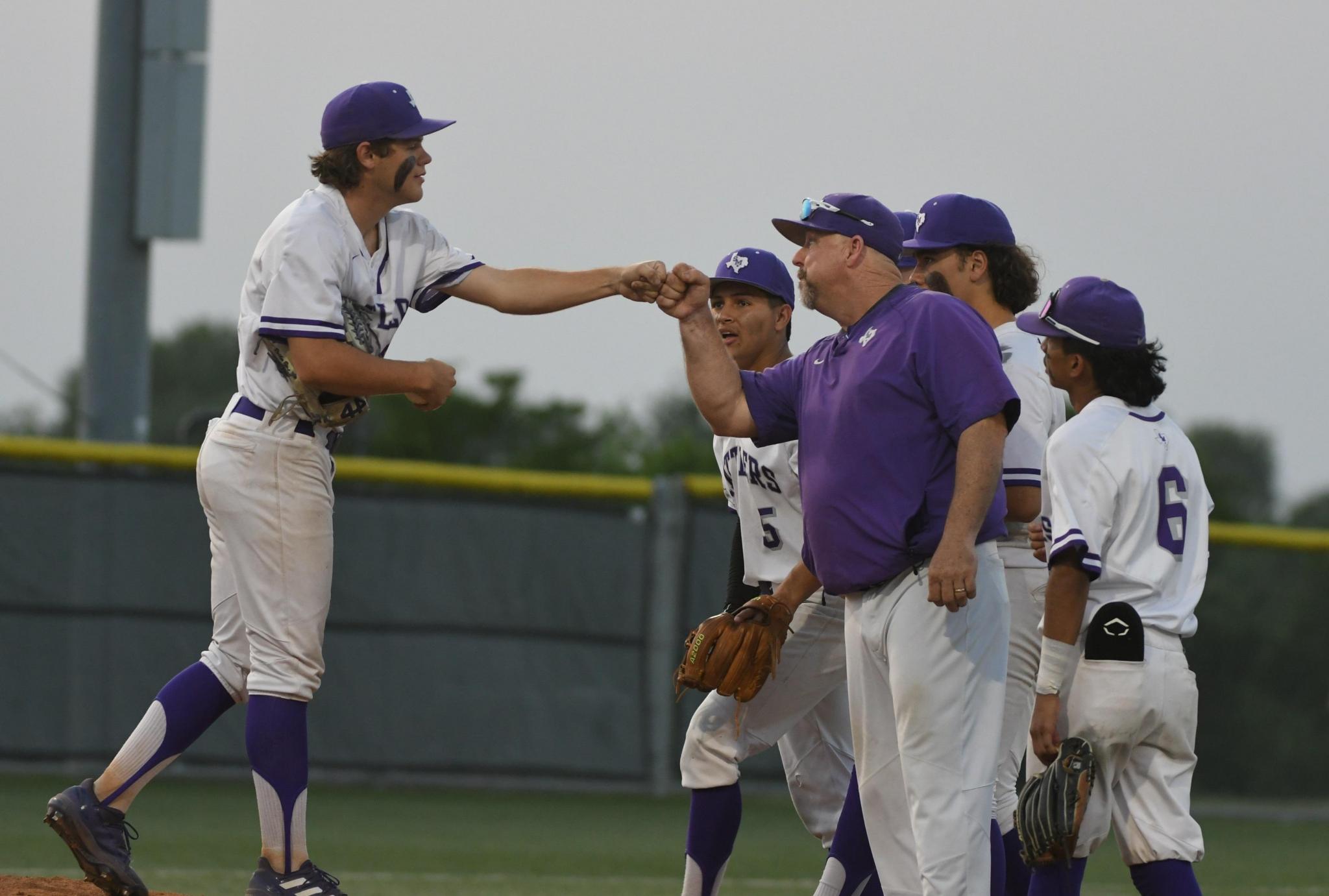 The Rattlers fell 8-6 to Round Rock Westwood in game two of the series, competing in a back-and-forth affair that came down to the final out of the game.

“Super proud of these guys,” head coach Bryan Webb said. “They never quit. They exhibited what we preach in the program. I told them, I said, ‘you’re a direct reflection of your work ethic’ and they show up every single day and go to work. I mean, I'm super impressed with how they battled. We kicked ourselves in our own rear a few times and put ourselves in a hole. But, you know, to come back down (from) 8-3 and give ourselves a chance to tie it right there just shows the resiliency and the character of this team. You know, there were some negative things that we talked about a little bit first, but I said you know, ‘just for you guys to come out here and show that you didn't quit (and) that you battled, (and) you had two outs you didn't quit.’

“I said, ‘that just shows that you believe (in the team), and you believe you can win’ and the program is on the right track. It's back to where it was and good things are coming again. It didn't help our seniors leaving, but you know, we battled. Our kids are San Marcos kids, they’re blue-collar, they learn to work, they never quit and like I said, I'm super proud of them.”

Similar to Friday evening’s affair, Round Rock Westwood (23-6, 11-3) jumped out to an early lead. The Warriors put up three runs in the first inning off the back of three RBI doubles hit to different parts of the outfield, prompting the purple and white to sub in junior left-handed pitcher Ripp Soto for junior right-handed pitcher Tito Santos on the mound. Soto would halt the Warrior rally to end the first inning, stranding every runner with the bases loaded.

Round Rock Westwood continued its momentum at the plate in the second inning, putting up two more runs from an RBI single up the middle and a sacrifice fly out. San Marcos would make another pitching change during the inning, putting senior utility player Johnny Pardo on the mound after the Warriors scored their fourth run.

Pardo, the lone senior on the team, would make the most of his final game as a Rattler getting the purple and white out of the jam with minimal damage in the second before going on to pitch 2.2 shutout innings.

“Johnny I've had in the dugout since he was probably in fourth grade,” Webb said. “I had his brother RJ for four years and then Johnny, and, you know, Johnny made Academic All-State this week, which was super impressive. That’s a huge accomplishment for Johnny. That’s just a super award to get because you're putting the work in and you're doing your schoolwork. You know, Johnny is a kid (that’s) a four-year starter. He's played his guts out for us. He's played multiple positions, he's pitched, he shined today when we needed him to shine.

“He showed leadership as a senior (when) we needed to see (it) and Johnny is going to forever be remembered here because of the way he played the game. He played hard. He played tough. Even when he made a mistake, he kept going, him and his brother both. That's a good legacy to leave, the Pardos were good kids.”

Pardo’s quieting of Round Rock Westwood’s bats was timely, as his success on the mound coincided with the Rattlers’ first resurgence of the game.

San Marcos got their offense going in the top of the fourth inning, kicked off by sophomore right-handed pitcher and first baseman Reagan Chomel driving in Pardo on an RBI single to centerfield. Junior infielder Dallas Calderon followed up with a two-RBI double down the left field line, cutting the Warrior lead to two at the end of the fourth inning.

The scoreboard would remain untouched until the bottom of the sixth inning, where Round Rock Westwood got some much-needed insurance. The Warriors began the inning with two singles to the outfield, putting runners on first and third base. That’s when arguably the most impactful play of the game happened, with Round Rock Westwood hitting a three-RBI home run over the centerfield batter’s eye.

The purple and white would make sure the homer was the only run-producing play of the inning, but found themselves needing to score five runs in the top of the seventh to extend their season. San Marcos would hit a pop fly and a groundout to start the inning, making the scene a bleak one through the beginning of the half-inning.

Then junior right fielder Major Pellien came to the plate.

Pellien blasted a home run of his own over centerfield, igniting the Rattlers’ momentum. Kutter Gage Webb would get on base and Pardo would follow with a standup double, and then junior Stephen Wilder would make the most of his final at-bat of the season. Wilder cleared the bases with a two-RBI single to left field cutting the Warrior lead to two once more, rallying the San Marcos dugout and crowd.

Round Rock Westwood would finally close the door after allowing three runs with two outs, forcing the purple and white to pop out in the infield, concluding the game at 8-6 and completing the 2-0 series sweep.

San Marcos (16-17-1, 8-6 District 26-6A) will head into the off-season returning all but one player, and with its underclassman leaders now having two years of experience. The Rattlers will look to continue to make strides in the weight room until the beginning of next season, but also have other plans in store to prepare for the 2023 season.

“I told them a quick thing, I said ‘tonight, go home and you're going to write a little diary of what happened in this playoff series, and we'll put it in an envelope and we'll open it up again next year before the first round. (So) we'll reevaluate how it felt and what you think you did and what you needed to do better. We’ll go into (the) offseason, and we'll start our player evaluations and kind of start talking about next year. But I (told them) we're going to start creating more competition in practice (so we can) not just have the certain guys (step up) because nobody will step up and challenge them, so we're going to put some challenges and some things in the middle of practice.

“You know, competition breeds success. And that's kind of where we're going to hit it. Yeah, we've got some guys coming back and the future is bright, but we can't rely on this or that we're going to have to rely on our work ethic going into (the) offseason and try to find a way to get better and take this thing playing into late May and June.”