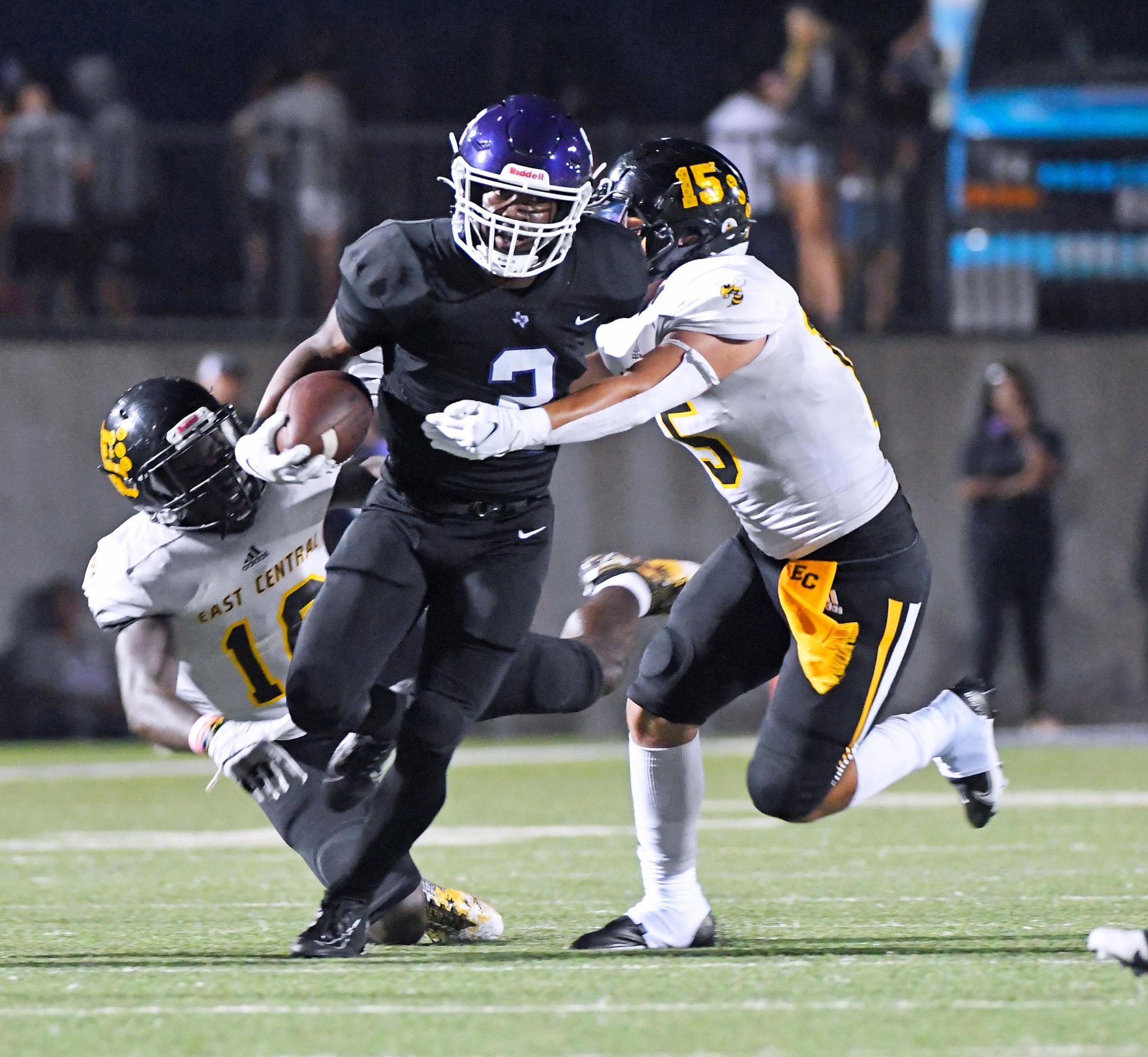 The third time's the charm for San Marcos.

In the season opener against New Braunfels, San Marcos trailed by five with the ball and an opportunity to steal a win on the road but came up short. In week two against San Antonio Holmes, the Rattlers trailed 35-34 with less than two minutes to go in the game. But after a failed two-point conversion, Holmes escaped with a win.

Finally, after fumbling two winnable games away, San Marcos found a way to grab the first win of the season, 28-16, in the non-district finale against San Antonio East Central.

“We play this game and it's a fun game to play, but it's a lot more fun when you have the energy from the crowd and we had a really good crowd tonight. I think the way our kids played, we captured them, so they’ll be back,” head coach John Walsh said. “I'm just glad, because we've really been in three of these ballgames. So to finally pull it out, it was all hands on deck.”

East Central (2-1) and San Marcos (1-2) both came into the game averaging 33 and 32 points per game, respectively, but it was the defenses for the non-district foes that set the tone early on Friday night.

The Hornets opened the scoring up by pressuring junior quarterback Isaiah DeLeon and forcing him to scramble out of the pocket into his own end zone. Blitz pressure came off of the edge, knocking the ball out of DeLeon’s hands resulting in a safety for the visiting team — the only score of the quarter.

San Marcos responded with its patented run-pass option offense, just minus the pass. The Rattlers carried the ball five consecutive times to start the second quarter. The fifth carry resulted in a five-yard rushing touchdown by junior running back Jaidyn Brown which gave the Rattlers a 7-2 lead with 8:54 left in the half. The run jump-started the offense for both teams.

It only took 2:17 seconds for East Central to score its first touchdown of the night on a three-yard rush up the middle. The Hornets started to add a little swagger to their play calls. A reverse sweep opened up the right edge for sophomore quarterback Austin Vivier, who scored on a 14-yard run, giving the visitors a 16-7 lead. With five seconds left in the half, Walsh called a timeout to set up a designed pass play. It worked to perfection as DeLeon found senior tight end Elijah Pearson wide open on the left side of the field. Still, East Central had a 16-14 advantage heading into halftime.

It took no time for Brown to strike again, but this time with an abundance of Hornets attached to his back. From 30 yards out, no one could take down the sophomore. The score awarded San Marcos the lead, 21-16, with 5:52 left in the game.

“I gotta shout out (assistant) coach (Carl) Thompson for that,” Brown said. “That’s that weight room, just keeping us in the weight room, keeping everybody strong and trying to keep us healthy out here.”

The defense continued its dominance up front, getting countless pressures against Hornets senior quarterback Caden Bosanko. After scoring 33 points per game in its first two contests, East Central was held completely scoreless by the Rattler defense in the second half.

“If you line up the same way all the time for (Bosanko), he'll end up finding and picking you apart. So we did a good job and credit to our kids,” Walsh said. “When you're multiple on defense, you gotta be disciplined, and some of the things that have snake bit us to a loss have been because we haven’t been being assignment-sound and I think our discipline is better and we're starting to tighten the screws a little bit on it. And you saw us make our fits good, and I'm really proud.”

Brown wasn’t done doing damage to the Hornets’ run defense, saving his best carry for last. With 1:30 left in the game, the sophomore sealed the Hornets’ fate with a 58-yard rushing touchdown by bursting up with middle, swerving through the left lane like a car on I-35 and diving in the end zone with a defender draped on him.

“So I ran, saw a hole and just burst right through it and just prayed that nobody would catch me and I was gone. And then I made it,” Brown explained.

The schedule doesn’t get any easier for San Marcos as they open District 26-6A play with two top-10 opponents in the state of Texas. Up first is No. 7 Lake Travis (2-1), with the opening kickoff set for 7 p.m. inside San Marcos Toyota Rattler Stadium.

“We’re trying to get into the playoffs right now. Those two teams are playing for titles right now, so we're on different spectrums. We gotta go, we’ve got a great team coming to town and I gotta get back to the house and wake up in the morning and find out who's available,” Walsh said. “What we have to do is to make sure that we just keep getting better as we play these two top-10 teams in the state and try our best to stay injury-free.”