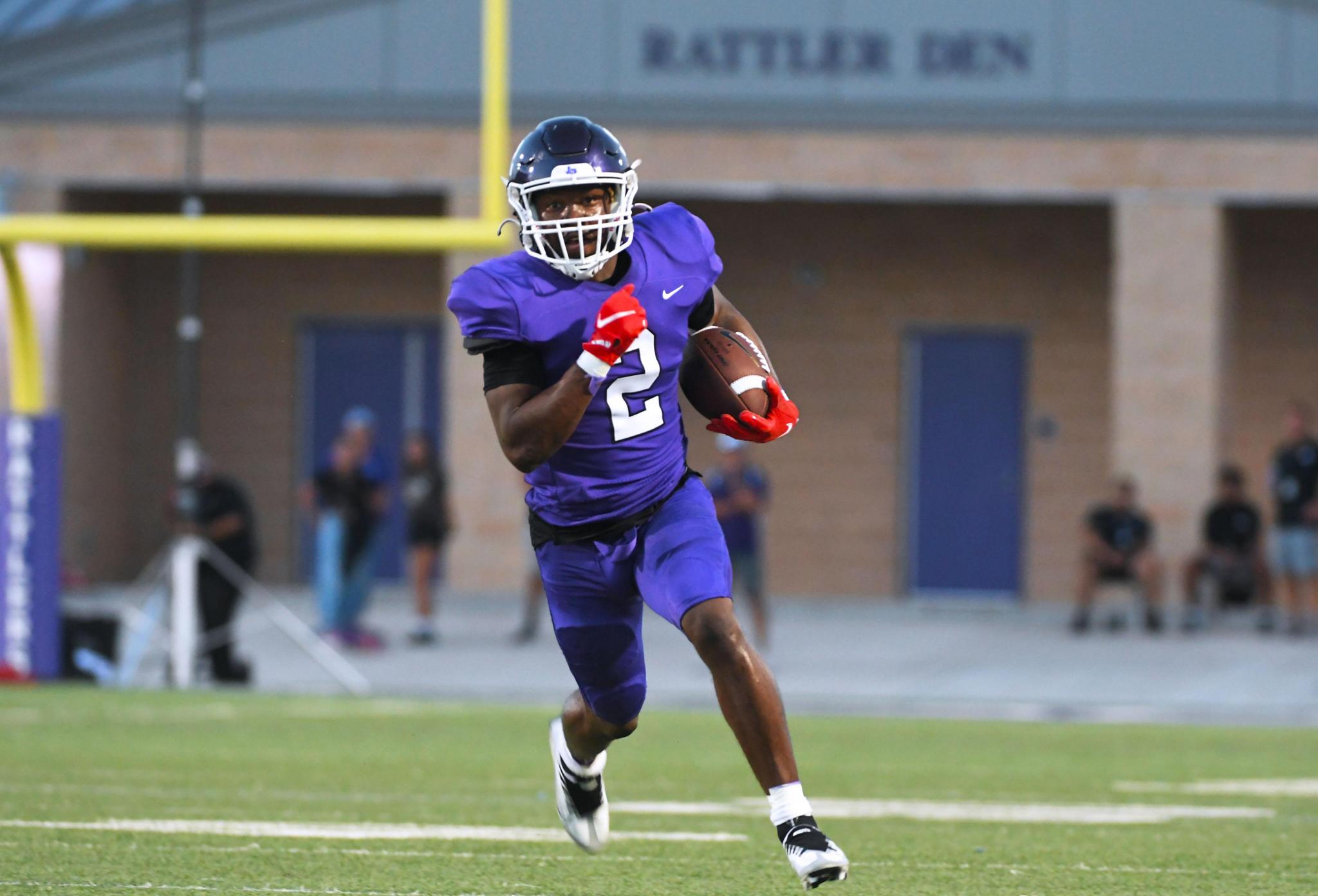 Rattlers look to rebound against Mavericks

San Marcos is hoping to bounce back in week two against San Antonio Madison.

The Rattlers fell 46-21 to Hutto in a disappointing season-opener for the purple and white. San Marcos will head into their second matchup of the season against the Mavericks looking to wipe the slate clean from week one after being snake bit by penalties and a lack of consistency on both sides of the ball.

“I think it’s just teaching our kids that week one is just a measuring stick to see where you are,” co-offensive coordinator and wide receivers coach Marvin Nash said. “That’s all it is. In the four years in the past that we played for state titles, we were 1-3 in openers, and that’s just where we are. We’re seeing where we are as a team, and then teaching what needs to be taught to bounce back from it. So I think our kids understand that and our coaches definitely do — so we’re (feeling) really optimistic this week.”

San Marcos (0-1) went into their week one matchup looking to run their offense as smooth as possible, but after an early interception by the Hippos on Rattler senior quarterback Isaiah DeLeon’s first pass of the game things started to unravel. A fumble followed during the second half on top of consistent penalties, all contributing to Hutto’s onslaught that led to their victory.

The purple and white attribute their mistakes offensively to a lack of discipline stemming from an inexperienced offensive line. Defensively, the Rattlers feel like they will continue to improve with more live-game reps each week.

“Offensively it’s discipline, (there were) too many penalties, too many unforced errors, too many blown assignments and that’s just week one jitters,” Nash said. “Four out of our five offensive linemen didn’t play varsity football last year — it’s a new experience for them. I know we’ll progressively get better (at) offensive line. Receiver, quarterback and running back-wise, it’s just locking in (and) knowing the plays that we need to know in the game plan that we have set for each opponent and addressing that each week. We’ll have that fixed.

“Defensively, it’s just gelling. Getting live reps against live opponents helps you, so every week (it’s) that for us. Our defensive line is one of the best in the district without a doubt. Both defensive ends (seniors Jake Darling and Ja’Kwavius Simmons) are solid, and (in) our defensive interior front, we have a rotation that’s strong so we keep fresh bodies in. Then our linebacking core runs and tackles (well). Our safeties are great, (they) get downhill and our corners do a great job (on the) boundary (and our) infield corners do a great job in coverage, so it’s just (getting) those live reps (to) make us better each week.”

After examining Madison’s (0-1) film from their 14-10 loss against District 27-6A foe Schertz Clemens, the Rattlers noticed the Mavericks’ team speed and scheme as strengths defensively. Offensively, the purple and white will focus on slowing down Madison’s run game.

“Defensively they run around well, they get to the ball. They’re high pursuit, which is good,” Nash said. “I mean, any good defense has to have some type of speed. Also, I like their scheme. I think their coaching staff does a great job preparing them for each team that they’re playing. So this will be a fun one on Friday.

“They do a good job offensively of running the football. I think their offensive line is really good. They have a good running back core, and I think the quarterback puts the ball where receivers can catch it, so he does a good job as well.”

The Rattlers will return to Toyota Rattler Stadium to face off with the Mavs in their second matchup of 2022 on Sept. 2 at 7:30 p.m. in San Marcos. The purple and white will look to wipe the slate clean in their week two matchup with Madison and get back on track before preparing for their first road trip of the season in week three.

“For us it always comes back to us taking care of us (and) just being as disciplined as we possibly can — eliminating penalties, eliminating unforced errors,” Nash said. “And, you know, I never doubt the way we play. We play hard. We play fast. We play physical. We’ll continue to do that. (We) just (need to play with)  a little bit more control and a little more discipline. And I see our kids locking in and knowing what we’re doing and doing it well.”