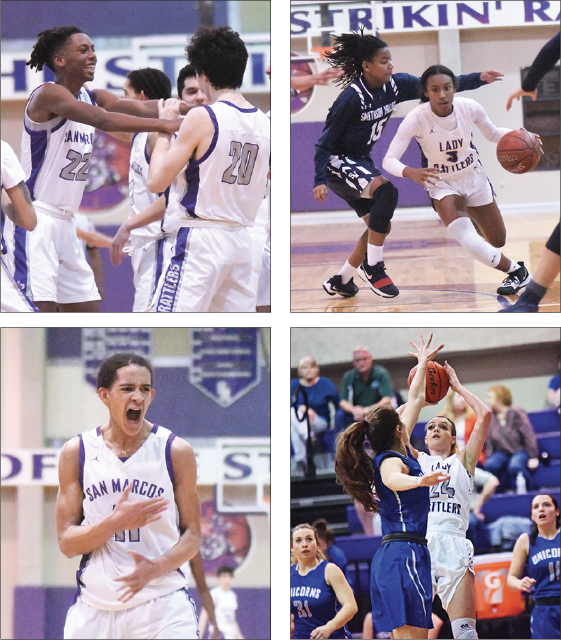 On the boys’ side, freshman guard Kaden Gumbs and forward Malik Presley were both voted to the All-District Second Team. Senior guard Josh DeLeon was also an Honorable Mention selection.

“It's a good thing for the program. You know, those guys — the seniors kind of helped lay the foundation, but those (freshmen) are the pillars, you know, and they're going to be the ones that are going to carry us to where we're going,” boys’ head coach Steven Pinchback said. “It's a new era in San Marcos, so I'm really excited about that. You know, they're probably about 14-plus points a game coming back, each. And they're going to be a lot bigger, faster, stronger. We're already busting their tail in the weight room. And these kids are hungry and all the kids are working hard. So I'm truly excited. It's a great honor, they've earned that.”

The University Interscholastic League (UIL) announced on Monday that it is expanding its suspension of all sanctioned contests to include all practices and workouts through March 29 as well due to concerns surrounding the novel coronavirus (COVID-19).

Kendall and Pinchback said it’s been difficult not being able to work with their players on a consistent basis at the moment, but understood why the suspension is necessary.

“I've had my hand on the pulse. I've been trying to figure it out in communicating with leadership and things like that, just to kind of make sure we're in the loop,” Pinchback said. I'm back home in West Texas, so it's been a little bit more difficult. But you know, with technology you'll still be able to get what you need to.”

“That's kind of the life of sports. You have to adjust and constantly make adjustments. So I think in the interest of the health of everyone, it's the best decision,” Kendall said. “But you know, it's always tough to have those things — what we do, those things, the games, the practices — it's tough to be away from that.”